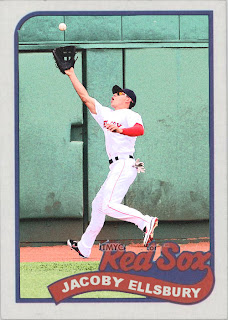 I may have gotten a lot of Red Sox fans against me for a few reasons this year. Mainly because of the Derek Jeter jersey hanging from my logo, and the fact that I'm a fan of their sworn enemy. But also, because Jacoby over here is only the second Red Sock I have posted all year. Now granted, a made an Adrian Gonzalez earlier this year, just because he was doing great at the plate.

But now that the Sox are in first, I need to start making cards of them again. I can't be biased in my card-making, because fans of the teams I don't make cards of will be mad at me. I realize I don't make too many cards of the Diamondbacks, or the Rockies, or the Marlins, but that's because it takes a lot more work to put them into an older design. I realize now that the Red Sox are a good team, and there are a few fans wondering where all the Boston customs are. So naturally, they're back in the mix. And with this Ellsbury up top, I think more is the only answer for Baaston fans.

Coming Tomorrow- A well-hyped rookie for Tampa who recently made his debut.
Posted by Jordan at 10:21 AM
Labels: Custom Cards, Jacoby Ellsbury, Red Sox