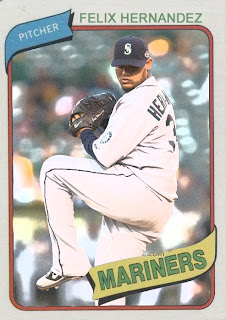 If this year's All Star game is remembered at all, it'll be remembered for the year that there were no stars on the All Star team. Felix up here, along with several other overqualified AL pitchers, was taken off the roster, mainly because he pitched in a game yesterday. Verlander, Sabathia, Hernandez are all off the roster. This infuriates me, because all three of those people deserve to be on the roster. The same thing goes for Cole Hamels. I mean...if they're in the All Star game, WHY IN THE WORLD DO YOU START THEM TWO DAYS BEFORE??? It's just infuriating, because now this has cost Felix Hernandez, the man that I still think should not have won the CY Young last year, an All Star game. This is why there should be an extra week of rest before the game, so that no pitchers are tired. Just a little mad at this.

Also, I'm going on another vacation, but I'm taking the laptop to this one. Customs will continue, cause I've made a million of them.

Tomorrow- a young Mariners prospect acquired in the Cliff Lee deal...no that that Cliff Lee deal, the other one.
Posted by Jordan at 7:54 AM
Labels: All Star Game, Custom Cards, Felix Hernandez, Mariners, Ranting