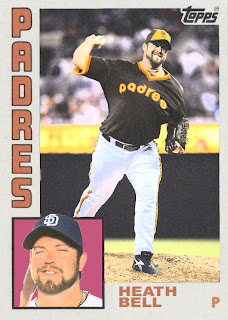 Let's face it- no matter what happens in the next nine days, it is almost certain that Heath Bell will end up on another uniform. And Topps is already readying its Heath Bell Traded set card, just not laying in the team until August. And I'm pretty sure that even Heath Bell knows his days with San Diego are coming to an end. The reason- The Padres can't afford his array of quirkiness anymore.

Heath Bell is a great closer that doesn't get as much stardom as he should (Why? Because Jose Valverde's getting it all). And, back in 2009 when the Padres were "okay", when they had some stardom with Adrian Gonzalez, and an aging Brian Giles, Heath Bell was still not a star, but people still knew he existed. Now, the Padres are like a ghost town, with only prospects, a few familiar faces, Heath Bell, and David friggin Eckstien. No wonder they're circling last.

But when the Padres do eventually get rid of Heath Bell (normally, it'd be "if and when", but we're long past if), the team that recieves him for prospects and a young outfielder nobody cares about will think they've hit gold. Heath Bell is not only a dominant closer, but from what I've heard he's a nice guy, and a great baseball personality. I saw at the All-Star game that he was talking to a couple kids that wanted an autograph, and he struck up a full conversation. After said conversation, he pulled out pre-signed baseball cards and balls. He seems like he's nice to his fans.

So whatever team is rewarded with Heath Bell...I hope they use him well.

Coming Tomorrow- A once touted prospect from (of all places) San Diego, this guy now occasionally occupies the DH spot in Baltimore.
Posted by Jordan at 9:57 AM
Labels: Custom Cards, Heath Bell, Padres