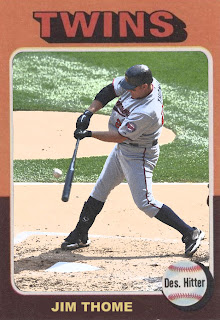 There aren't that many players who leave Philadelphia after a few great years, and get a huge round of applause whenever they return to play against them. Jim Thome is one of those people. During my days as a Philly fan in the mid 2000's, when the Phillies' mediocrity held no bounds, I went to a lot of Phillies games during Thome's tenure, and I thought he was a great player. Decking home runs over the wall, and he also seemed like a nice guy.

In 2007, my 5th grade class trip was to a Phillies game, and they were playing, of all teams, the White Sox. Jim Thome was indeed on the roster, and it felt pretty weird seeing him out of a Phillies uniform. Still, when he got up, the Phillies fans around us gave him a round of applause. And you could see that he enjoyed it. Not many players are still loved by the team he leaves.

Now last year, I got tickets to another Phillies game, against the Twins (Don't worry, these weren't my only Phillies games). Jim Thome didn't start against the Phils, but I had a feeling he's be playing eventually. Sure enough, around the 5th inning, Thome bounded out of the dugout, toward the batters box, and even before the announcer could finish his name, the crowd rose and gave the man a standing ovation. And boy, what I'd give to see the look on his face. The team he was with for only 3 seasons, still loves him. I'd be smiling, and I'd tip my helmet to those fans.

The point I'm trying to get at here is that there are very few people in this world that hate Jim Thome. And I'm not one to think that Hall of Fame voters are among those people.