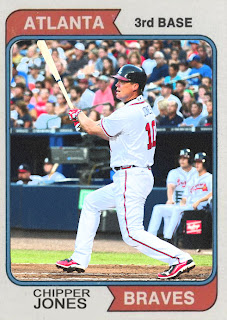 I woke up at noon today. That wasn't really sleeping in, because I'd just had a nine hour sleep, after getting home late from the Harry Potter premiere. But you people don't care about that. Matter of fact, you're probably wondering why I don't have any Allen and Ginter with me? I haven't gotten a chance to go to Target yet. I'll get some soon, if you can wait a little bit.

Now, onto the person on the card. Chipper Jones' rookie card premiered 20 years ago in Topps products, which is another way of saying "Chipper Jones will be retiring soon". He's quite an interesting player, despite the fact that he's bowed out the last two seasons with an injury. He's a surefire Hall of Famer, and he's destined to get his number on the Turner Field wall. So basically, we're all just waiting for him to retire in order to really respect him. Or something like that. Still...CHIPPAH!

Coming Tomorrow- This post might come a little late in the day, since I'll be going to a Paul McCartney concert tonight, and lord knows when I'll get home. But nevertheless...there will still be a custom of a guy who's somehow the AL's top closer.
Posted by Jordan at 1:33 PM
Labels: Braves, Chipper Jones, Custom Cards