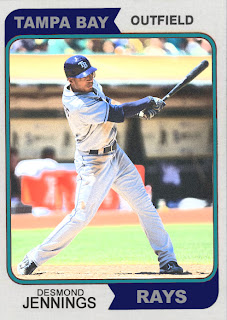 I've been getting more and more comfortable putting new teams into old customs, and completely redesigning the card to fit the team. It was at first kinda hard, but now I've been having a lot of fun with the idea. For example, a few days ago Desmond Jennings, a huge prospect for Tampa whose name is not, nor ever was Tim Beckham, made his ML Debut. They're hyping this guy up to be a big hitter, future of the team and all that. So naturally, I decided to make a custom of him. Truth be told, it looks pretty damn good. The way I tooled with the design makes it look like a modern rendition, sorta like what Topps did with the 1977 design in Trading Card History for Chris Young.

So hopefully, you'll be seeing a lot more expansionist customs in the near future. And they'll be just as awesome.

Coming Tomorrow- I already made a card of this guy a month ago...but he was just traded to San Francisco. Tomorrow, he gets his 2nd card.
Posted by Jordan at 9:43 AM
Labels: Custom Cards, Desmond Jennings, Rays