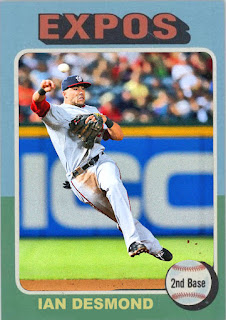 1.) The Montreal Expos had a winning record, fueled by a power hitting offense and some stellar pitching, thanks mostly in part to Pedro Martinez.

2.) The season ended early thanks to a (poorly timed). Had the season finished, the Expos would have been the likely favorite to win the World Series. This was a year after the Phillies claimed all, and before the Braves would have their multitude of pennants.

For a brief second there, the Expos were on top. And the sad thing is that it took them 18 years and a location change for them to get back there.

I'll say this about Ian Desmond: brilliant defensive player. He's young, he's quick, and he's really good at his position. A shame he got hurt around the All Star Break, because he deserved that nomination.

I'm really glad that team is doing well, and I hope they get pretty far into the postseason.

Coming Tomorrow- Speaking of teams inexplicably doing well, you'd have to travel back to the era of the Bash Brothers to find this team in the World Series. Now, as the team returns to the Wild Card race, an outfielder tries to sell his team on speed and defense alone. And no, not the one that is part of this complete breakfast.
Posted by Jordan at 9:39 PM
Labels: Custom Cards, Ian Desmond, Nationals