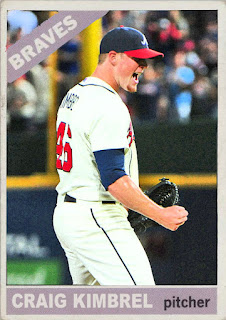 Closers. They get no respect.

There's a heaping pile of them in the Hall of Fame, but the ones there (Fingers, Sutter, Eck) are only a few of the many who've gave it a go.

Of the two greatest closers of all time, one is retired and the other is injured. There are no shades of grey in closing.

And yet the man above may end up clinching the Cy Young award, despite being a lowly closer for a team that may or may not (verging on the latter) be making the playoffs. It's weird, but it makes something resembling sense.

Kimbrel is establishing himself as one of the best closers in the NL, which can be a dreadful task for a rookie. Injuries may haunt the rest of his career, but he doesn't care. He'll keep his saves up, and he'll keep his career up. The Braves may have a Rivera on their hands.

Although that's hard to believe.

Coming Tomorrow- His team isn't making the playoffs. But it would have happened either way.
Posted by Jordan at 10:00 PM