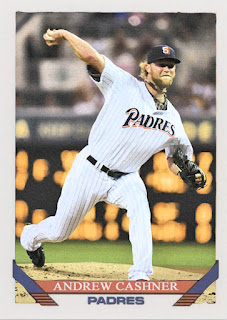 Forgive me if they kinda hinder the overall awesomeness of the custom, but to me they make them even better. Those throwbacks make the card look even more authentic, and even more like it could have happened. Lately I've been doing research and making sure I'm using the right uniforms for the timeperiod. If I would have made this a 1990 custom, I would have been a year late.

Of course, not everything's perfect. While I would love to have done a throwback of every awesome uniform, I don't think I have. So I'll give a list of every team, and a throwback I'd like to do from them.

Angels: I've done their 60's (Mike Trout last year) and their 80's (Torii Hunter last year) unis, but I'd love to do a Late 90's Anahiem Angels one. That would be pretty cool. Dunno which design I'd do (1997 seems easiest), but those uniforms are kinda cool.

A's: 60's uniforms. Not the Kansas City Athletics ones, but the ones right between the Kansas ones and the bright yellow ones. Those plain green ones that Rollie Fingers wore in his first few cards.

Astros: I don't think I missed any good ones.

Braves: I've covered all the good ones.

Brewers: I'd love to do a throwback custom of their Seattle Pilots unis. If they ever decide to wear them again. If not, their 1995 ugly ones. Oh yeah. I went there.

Cardinals: Did most of the good ones. One of which is coming in a few days.

Cubs: I don't think they've had any distinctive uniform changes in a while. Which is nice.

D-Backs: The one I always wanted to do is coming tomorrow.

Dodgers: Probably their 70's uniforms. Nothing much, but still pretty good.

Giants: Oh, their mid 80's/early 90's uniforms. I'd love to customize them. With the almost-yellow SF on the cap. Those were cool.

Indians: Have I done their 70's pink ones? If not, I need to. Those were kinda cool. Weird, since "cool" and "Pink" don't go too well together.

Marlins: Oh my gosh. Oh my gosh. If they ever do a 1993 Teal Night, I will do customs of the whole damn team. I mean it, too. I freaking loved those teal unis. I wanna customise that one so badly, except I doubt they'll ever wear that one again.

Nationals: Who wouldn't want to see Strasburg or Harper in an Expos jersey? Seriously.

Orioles: I don't think anything stands out.

Padres: Most of the good ones I've done already.

Pirates: Oh, there are tons. Some 70's yellow, those 80's hats, the list is endless. There are a million different throwbacks I wanna do with the Pirates.

Rangers: Did most of the good ones. Even the 90's Red.

Red Sox: Nothing that specific. They've had the same real uniform design forever, so I can't really do any throwbacks for them.

Rockies: 1993, but that looks too much like what they wear now.

Royals: Oh, their 70's stuff would be really cool. I mean it. Or an Athletics night.

Twins: 80's/90's stuff. What they won the World Series' with. That would be so great to do a throwback with.

White Sox: Their two unis (the red throwback and the current black) I've done tons of.

Yankees: Yeah, it would have been awesome if they modernized their uniforms 20 years back so I could do some throwbacks. No. Yankees don't play dat.

Coming Tomorrow- What's that? A custom of a card from eleven years ago? What demonry is this?
Posted by Jordan at 10:31 PM