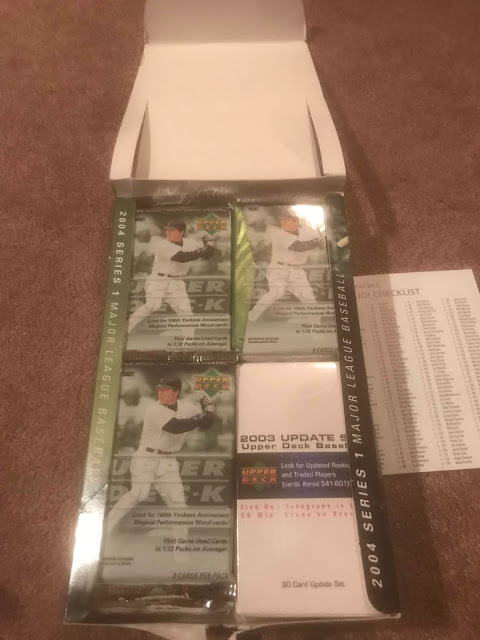 We have eight packs left in this delightfully nostalgic box of 2004 UD. We've already gotten our first hit, which was a fantastic Dustin Pedroia XRC jersey card, with one remaining. And we've still got some cool base shots to pull. So let's finish this one off: 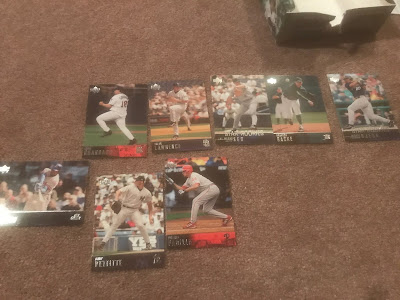 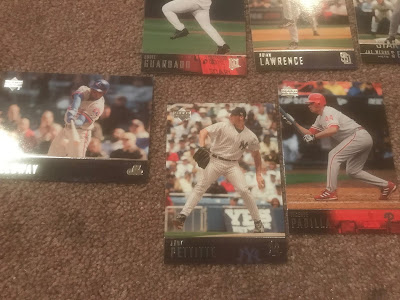 A decent shot of Expo Ron Calloway, whose...career died before the Expos did. Plus, interesting issues of Andy Pettitte and a bunting Vicente Padilla. 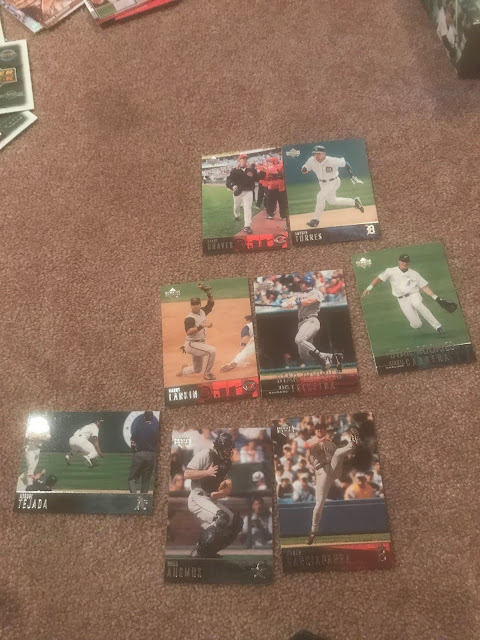 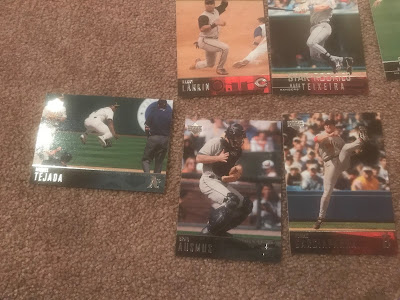 Some decent star developments with Miguel Tejada, Brad Ausmus and Nomar Garciaparra. All but Ausmus changed teams during the baseball year- Tejada left Oakland for Baltimore, while Nomar left Boston at the EXACT WRONG TIME for Chicago. 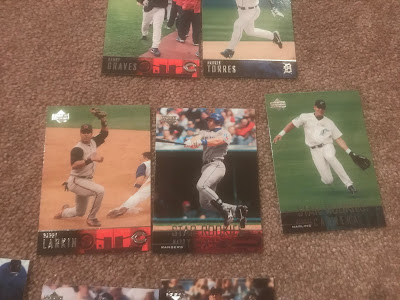 And then these three definite highlights. Barry Larkin was just rounding his final season as Cincinnati's shortstop, while rookies Mark Teixeira and Miguel Cabrera were just breaking into the league (hell, Miggy already had his first and only ring by the time this card was produced.) 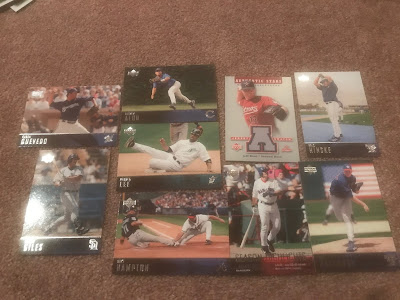 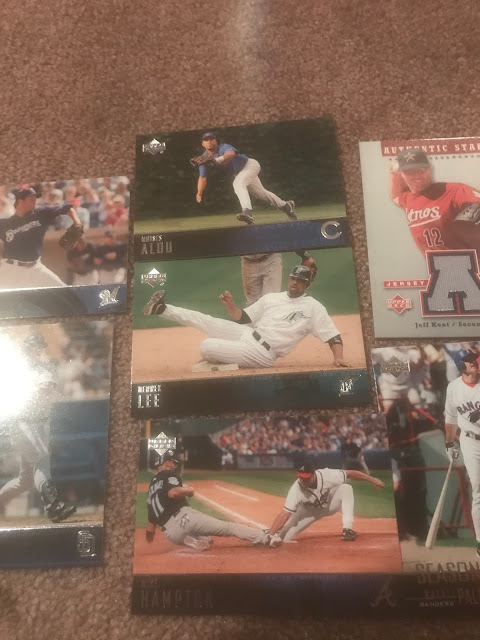 Lots to get to in this incredibly strange pack, so we'll start with these three. Moises was prowling the outfield for Chicago in '04, getting an ASG nod in the process. Derrek Lee would already be in Chicago with him by the time this card was released. And that Hampton card is a BEAUTY of a photograph. 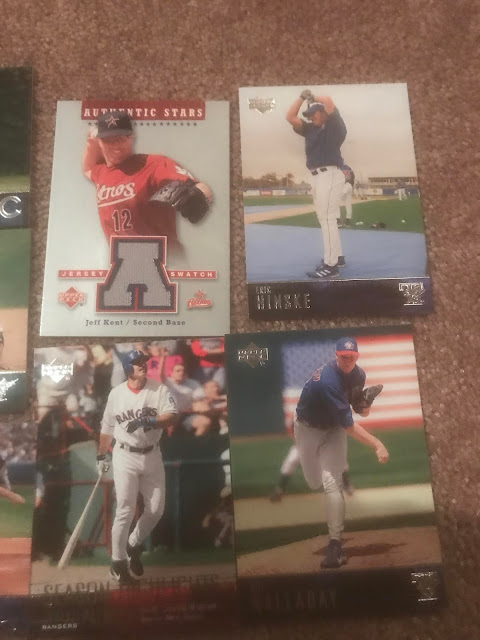 Let's get the hit out of the way first: that's a perfectly alright grey swatch of Jeff Kent of the Astros, in an Authentic Stars hit subset. This is a very boilerplate hit, as Jeff Kent was a good player and a terrible human being. Not even his inevitable stint on Survivor would save him for me. So...very meh hit, but at least it wasn't my only hit.
I love that Hinske shot.
Rafael Palmeiro was still doing season highlights even in the last years of his career.
And...that Halladay is fantastic. The American flag in the background is a nice touch. Way to go. 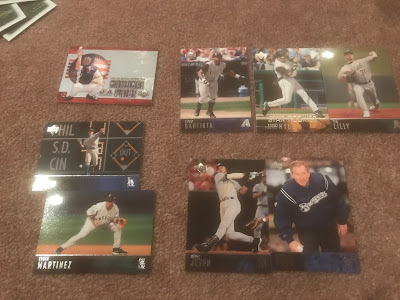 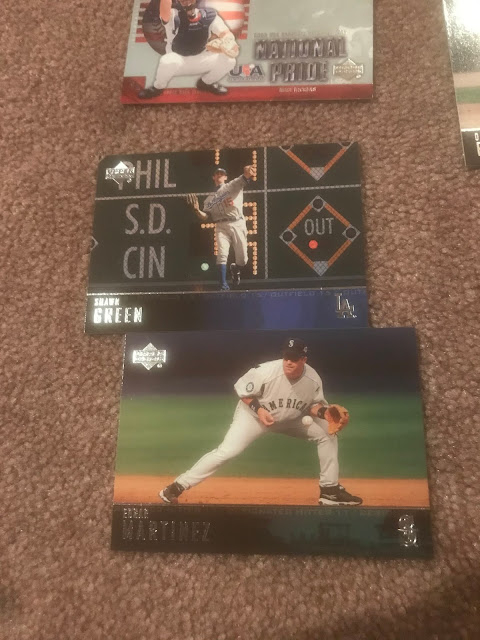 Shawn Green looked hella cool with that throw from the outfield standings. And...Edgar doesn't really need to try to look cool. This one seems to be from the 2003 All Star Game. 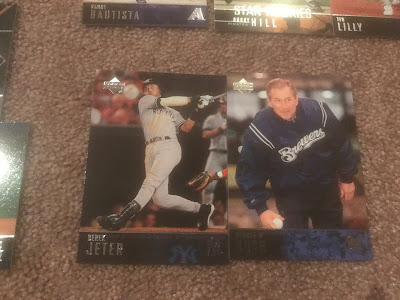 A card of Derek Jeter doing his damnedest, and uh..

Okay, let's examine this one for a moment: 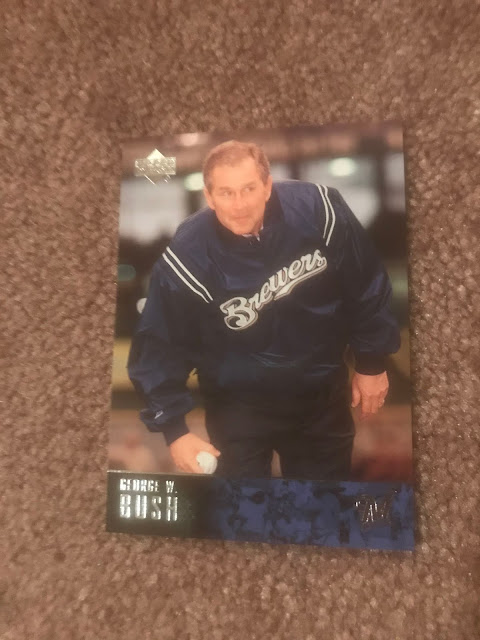 There. You can see it too, right? I'm not crazy, right?

Okay. Let me explain how this one wound up in a pack I opened.

In 2004, with Series 1, Upper Deck would short-print eight First Pitch cards, and seed them one in every 72 packs. Why did they do this? I do not know.

The choices for the First Pitch subset were mostly A-list gets for Upper Deck. A few sports stars (Ernie Banks, Gordie Howe, LeBron James), a few celebrities (Ben Affleck & Halle Berry, as this was, in fact, 2004), and both George W. Bush and his dad George H.W. Bush.

And that's how I pulled a card of Dubya out of this unassuming box of UD flagship.

The most baffling part about this card is the fact that Bush is pictured in a Milwaukee Brewers jacket. Yes, this is one year before the Nats would make first pitches a lot easier for a sitting president, but the last time I checked, George W. Bush isn't from Wisconsin. No, as a matter of fact, I feel like he used to be the GM of a different MLB team before taking office. And I'd imagine that said Arlington-based MLB team would welcome him back for a first pitch anytime he wants.

It's not like LaDanian Tomlinson throwing out a first pitch in Arlington, where I don't get the connection because I conveniently forgot that he went to college in Dallas. I just...don't see why George W. Bush would do one in Milwaukee.

Then again, Halle Berry did hers in Montreal, and I don't know the connection there either.

So...as it stands, this is just a weird short-printed card for my collection, one that'll inevitably go next to the Jeter/Bush/Mantle card and the Mickey Mouse ASG card in my binder.

Anyway, back to our regularly scheduled nonpartisan box break: 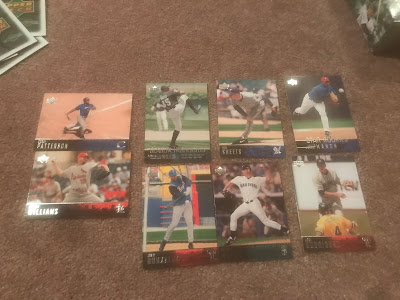 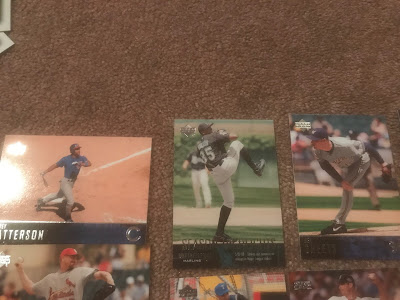 A few guys who were big in the mid-2000s. I love Patterson's shot, while Willis' and Sheets' aren't bad either. 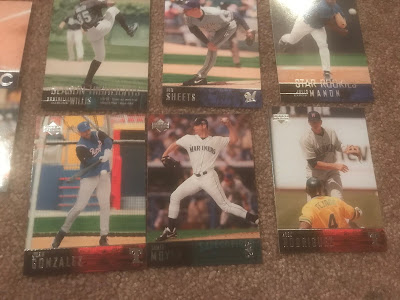 Juan Gone was still taking practice swings in 2004, though he'd spend the season not in Arlington, but in Kansas City.
Moyer was still bringing heat in his 40s.
And...despite my steroid-related qualms with Alex Rodriguez, that throwback uniform of his is hella cool. The Nats should bring those out more often. 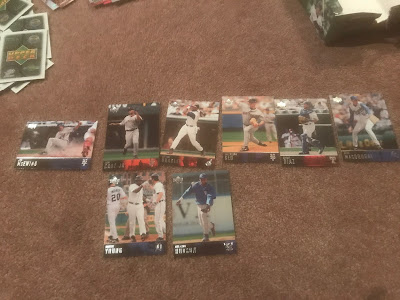 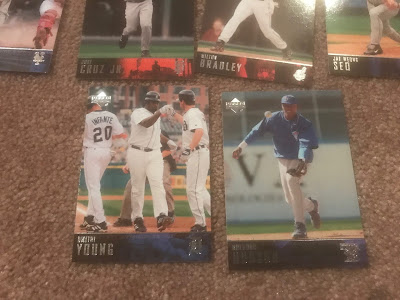 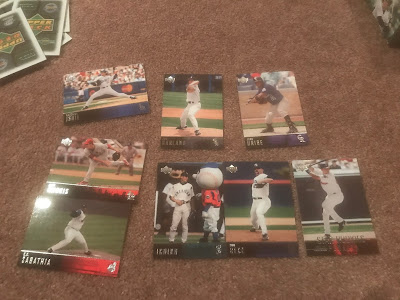 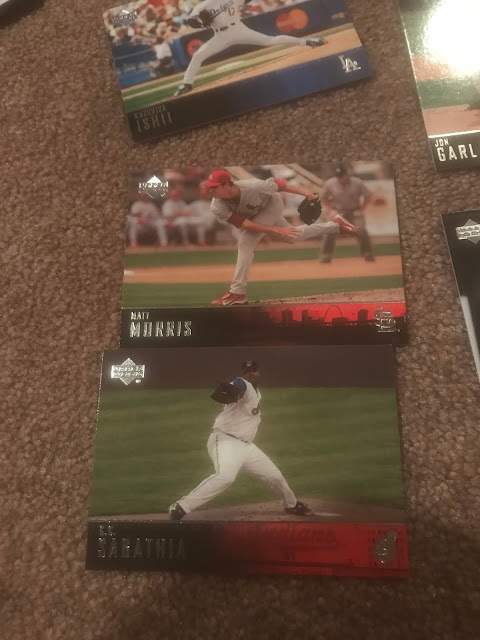 Two of the top arms of 2003, Matt Morris and CC Sabathia. Spoiler: the guy on the bottom would have a longer career. 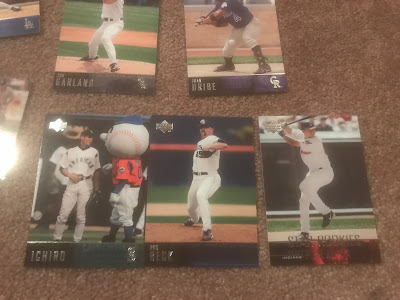 I adore that photo of Ichiro talking to Mr. Met. It's so much fun.
This may have been one of Rod Beck's final cards, and it's still pretty cool.
And that's a Jhonny Peralta rookie. May have been worth more pre-HGHs. 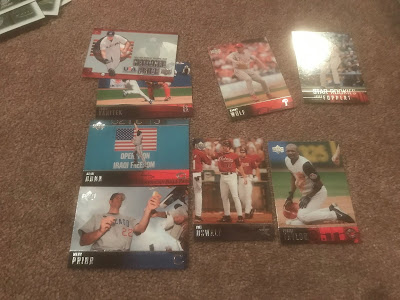 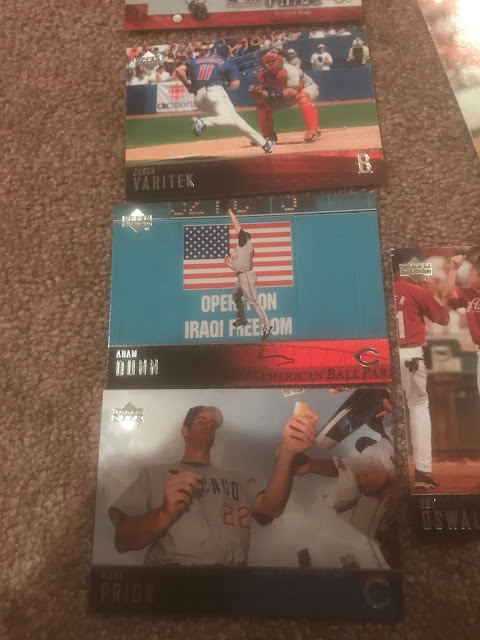 Three more fantastic horizontal shots for you. The Dunn one is eerily related to Memorial Day weekend, so thank god I'm posting this today. Varitek's is just cool. And I love the angle on Mark Prior's. 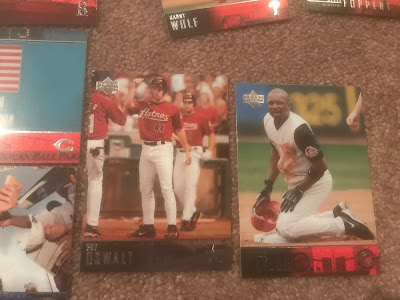 And we end on a sliding, grimacing Reggie Taylor, and a gracious Roy Oswalt.

Very cool, very fun set. I feel like 2005 UD would be a step down from this, as it'd try a few bland suggestions to widen the audience for UD flagship, but they'd get things back in order by 2006. Decent hits, fun if scattered inserts, and not a ton of doubles. Excellent job, UD, yet again.

I'll try to rip something a bit more current in a few days. You deserve something fun and current.
Posted by Jordan at 3:54 PM
Labels: 2004, box break, Nostalgic Box Break, Upper Deck, yes but WHY exactly?