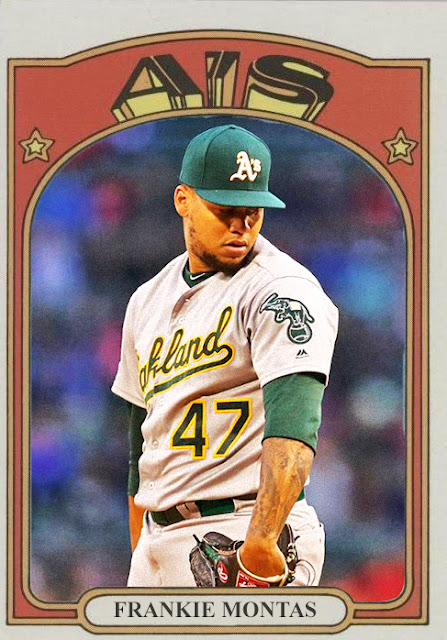 Like...for the second year in a row, the A's have thrown a no-hitter. Unlike last year, which was against the team that would eventually win the world series and thrown by a surging ace, this year, a down-on-his luck Mike Fiers had the best start of his season thus far by tossing a no-no against...the last place Reds.

...who, now that I am thinking about it, resemble an NL version of the A's.

I mean, let's do the math here. Both the Reds and the A's have:

I mean, there are fundamental differences otherwise- the Reds have a better rotation, the A's have a better bullpen, and the Reds have the trickier division to rise in the standings in. But...in terms of fun, entertaining last place teams, these two are very similar. And I sincerely hope good things eventually happen to them both.

Coming Tomorrow- A first-baseman for a team whose hot start has cooled into a very okay May record.
Posted by Jordan at 9:40 PM
Labels: A's, Custom Cards, Frankie Montas, Reds