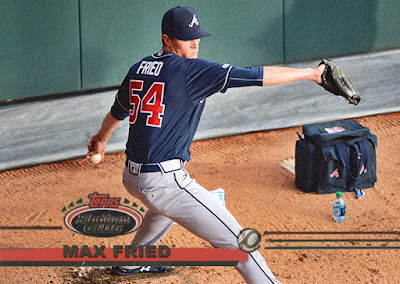 I really thought the NL East would be more competitive than this. I really did. Considering that the Phillies, Mets and Braves all had competing teams, and the Nats had an okay team with a lot to prove, I was not thinking this would amount to a two horse race between Philly and Atlanta.

Perhaps I gave the Mets too much credit. Although, then again, so did Mets fans.

The biggest shock coming from Atlanta though is the restructuring of the pitching staff. Last year's rotation of Teheran-Newcomb-Folty-Sanchez-Gausman was impressive, but after losing Sanchez you'd think they'd just call up Touki Toussaint and keep trucking. But that was not so. Sean Newcomb and Toussaint are now pitching out of the bullpen, Folty is now the weak link in the rotation, and the biggest stories are coming from the two new arms- second year Mike Soroka and relative newcomer Max Fried, who, along with Teheran and Gausman, are stymieing the hell out of NL batters.

Fried already has 6 wins and 46 strikeouts in 9 starting appearances, and has proved himself a formidable, hard-throwing lefty...in place of the one from last year who got the ASG nod who SHOULD be doing well this year. Soroka, who impressed in 4 games last year, is...even better. The dude has 34 strikeouts in 6 starts, with a .98 ERA. He's given up 4 earned runs in those 6 starts, which, it is important to note, is 17 less than the number of earned runs Mike Foltynewicz has given up in FIVE starts.

Bottom line- Fried and Soroka are insane right now, and are the kind of starters that Atlanta needs to stay in the conversation. Because while their team is good, and is in second, they're not at 1st caliber yet. They're not at the point they were last year at this time, and it worries me that they may never get there. And yes, it helps having the core four of Freeman, Acuna, Markakis and Donaldson all doing well, and it helps that Austin Riley is doing amazing in his first few games, but...the bullpen lacks depth. It's literally just a small enough unit with varying results, and it doesn't seem like any late additions to it have had any staying power. It's small enough that things could go wrong fairly soon.

This is a good team, and it could get REALLY good soon, but I'm not convinced yet. Hopefully I will be by the next time I have to write about these guys.

Coming Tomorrow- I don't know what I'd do if my franchise hero was this streaky.
Posted by Jordan at 10:26 PM
Labels: Braves, Custom Cards, Max Fried