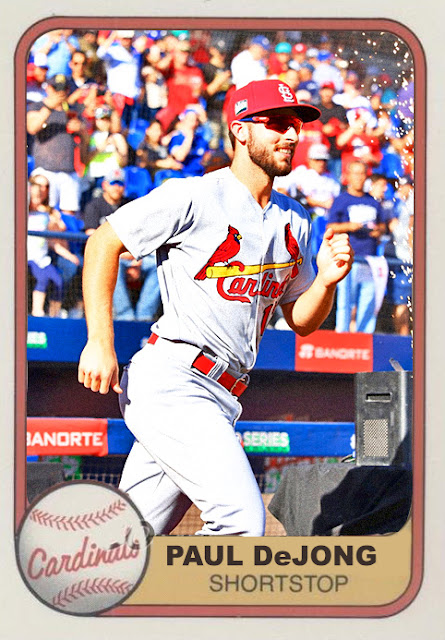 (Music Pun Streak #20. And to think, I thought I was done with these yesterday)

So. The Cardinals are in first. Again.

I'm not gonna act like they don't deserve it, because they kind of do. The Brewers could have been a perennial first place team, but they chose to blow easy games to sucky teams, so they're gonna do their thing, the Pirates and Cubs are gonna shoot for the wild card, and the Cardinals are just gonna waltz to the end again, right? RIGHT?

The Cardinals have the best record in the NL...and are tied for the best record in BASEBALL...with the Tampa Bay Rays. So already this is a great start to the season for this writer, a noted Yankee fan and fan of Ryan Howard's fully-functioning achilles.

Paul DeJong already has a 2.1 WAR, best on the team, a .333 batting average and 41 hits. Marcell Ozuna already has 10 home runs, and leads the team in RBIs with 29. Even Goldschmidt already has 9 home runs, as he seems to be doing his slow-burn strategy from 2018 again. Guys like Jose Martinez, Dexter Fowler and Matt Wieters, who haven't hit for average in ages, are doing just that. And John Brebbia, who was the bane of the bullpen's existence last year, has only allowed one earned run in 15 appearances.

...so to say that this Cardinals team has learned from its mistakes is a vast understatement. Oh gosh. This is bad.

The closest things to criticisms I can come up with...you know, besides 'THEY WON'T STOP', is that Matt Carpenter's average is way too low, and the starters have too many ERAs above 4. But...they'll probably fix those in the next week.

Until next Cardinals post....go Pirates.

Coming Tonight: Fun cinderella hero for a slumping team. Nevertheless, a happier post.
Posted by Jordan at 9:19 AM
Labels: blah, Cardinals, Could this seriously be happening?, Custom Cards, Paul DeJong, woe is me