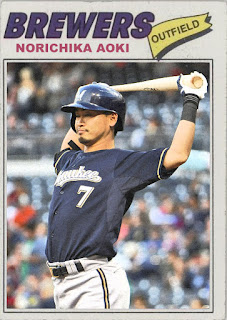 I usually get my photos from a photo site that begins with Z that I have often criticized, mainly due to their lack of competence during Spring Training. However, there is one particular aspect of Z's photography that often baffles me, and that is their obsession with Japanese ballplayers.

This season alone, just like any other season, there has been an abundance of Japanese imports. However, unlike the past couple seasons, there have been many Japanese imports that have mainly been used for trivial roles, like set-up men and relievers. Kyuji Fujikawa, Hyujin Ryu, Muenori Kawasaki- all of them for instance are rookies from abroad that haven't really done too much this season.

However, every time I find a gallery of pictures on Z, what do I find? Approx. 20 pictures apiece of those aforementioned rookies, who maybe just play for a little bit or pitch for an inning, just as there's absolutely nothing for the players I actually want to customize. It's not even one instance- it is every game they even pitch one batter for. And even if they only pitch for a short time, there's like 5 photos of them pitching the one guy, and 7 more photos of the same guy on the bench, or warming up, or picking his nose. And this is some guy who nobody cares about, and I don't want to customize.

Now before you accuse me of being a racist, please know this: shut the hell up. I'm not a racist, I am simply one to point out an ongoing trend. I have nothing against any of these players (save for maaaaybe Koji Uehara). I even made a custom of Aoki here. However, I had billions to choose from, as he averages roughly 97 pictures per game. Only 9 of them feature him playing. This is not me being racist, it's me pointing out a photographer's bias.

Now again, it might very well be that a lot of the photographers are from the same country as the players they're assigned to hawk. It could just be the assignment from their bosses. They could just pay less to be photographed before and during the game. I don't know. I just know that Z needs to start paying a little more attention to the players in the game that actually matter.

(By the way, in case you STILL think I'm racist, here are some very clear facts: Chien-Ming Wang is one of my favorite players, solely because of his Taiwanese heritage. My dentist is also from Taiwan, and he's a great man. A lot of my good friends descend from Asia. I'm currently doing a project for Health class with one of them. So there. Your point is invalid.)

Coming Tomorrow- Fine, fine. After the Corbin post I felt I should give some justice where it's due. So tomorrow you're getting a member of the illustrious Cardinals bullpen. However, I've already done Wainwright, and I hate Garcia. 1 in 3 shot of it being your favorite.
Posted by Jordan at 11:53 PM