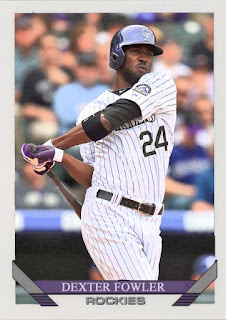 I've only seen Dexter Fowler play once. And it was a good one, too. You see, back in 2008, the All Star game was at Yankee Stadium. And no, I did not go to the All Star Game. I went to the Futures Game two days before. And the lineup was pretty impressive. You had people like Andrew McCutchen, Nate Schierholtz, Brett Anderson, and a bunch of other people whose names I forget offhand.

Then, there's Dexter Fowler. He was the one guy that my dad and I were saying to each other 'he's gonna be big, he's gonna be really good'. I mean, Andrew McCutchen was in the game, and we overlooked him to see Fowler. Think about that.

So then, the 2009 Topps cards come out, and the 2009 rookies get cards. And everybody wants their Tommy Hanson, David Price, Andrew McCutchen rookies. Yet I believe I was the only person on the East Coast who got joy out of pulling a Fowler rookie. Because he was going to be huge, and we all knew it.

Well, it's 2013, and Dexter Fowler, the man who we foresaw to be huge, is finally hitting. He's one of the Rockies' best hitters right now. Him, Cuddyer and Tulo are all off to great starts, but Fowler is the one I'm most interested in. Because I have a feeling that if he keeps it up, he'll be onto a few really nice seasons.

I'm not sold on him being absolutely huge anymore, but he's still good right now.

Coming Tomorrow- A third baseman for a team that shouldn't be as good as they are right now.
Posted by Jordan at 10:03 PM
Labels: Custom Cards, Dexter Fowler, Rockies