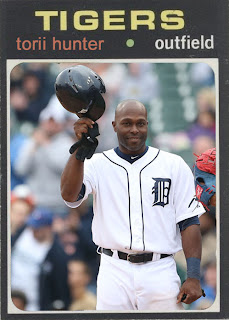 Torii Hunter is a very consistent player. He has survived taking over for Kirby Puckett, a losing Twins squad, a deal to Anaheim, the arrival of Pujols, Trout and Greinke, and a deal with Detroit. Has he slowed down, or at least to a considerable degree? No.

I don't think Torii Hunter is a Hall of Famer. If there's a lot of careful consideration in the next decade or so from several historians and stuff, maybe there'll be one or two sportswriters that make a huge case for him, like the people making a case for Dale Murphy and Dave Parker with no avail. Think about it: people like Greg Maddux, Tom Glavine, Ken Griffey Jr., Craig Biggio and Trevor Hoffman will all be going in within the next three years. I don't think that Hunter is up to that caliber.

I mean, he's good, he's very good. He hits homers, he plays his position well, he hasn't really slowed down in terms of consistency between teams. A case can definitely be made, but I'm not entirely sure if it'll amount to enshrinement. However, I can tell you that he's a great player, one I enjoy watching, and one who I hope sticks with one team for a while and doesn't succumb to the journeyman thing that affects aging outfielders like him. I'll say that the Tigers are lucky to have him, and he's probably going to end up having some mega-hit in the postseason or something that'll catapult him even more.

He's a great player, one that's fun to watch. And also, I hope he sticks around to give us some more awkwardly amazing card poses.

Coming Tomorrow- He's not Dylan Bundy, but he's one of the Orioles' best prospects.
Posted by Jordan at 11:39 PM