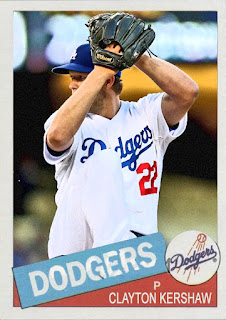 While I can say that I saw the downfall of the Dodgers coming yet again, one thing I didn't predict was the start its top pitcher would have. And you know what- that's great. Because now I can say that Clayton Kershaw surprised me this season.

I'm not saying I'm surprised that he's pitching well, because that's kind of a given. I'm just surprised that even when his team is doing poorly, he's still pitching consistently well (for the most part).

I love the guy, he's a great pitcher, and I hope he continues his great season, and, you know, doesn't injure himself in some odd way.

Coming Tonight: That mega-rookie from Texas everybody can't shut up about.
Posted by Jordan at 7:15 AM
Labels: Clay Kershaw, Custom Cards, Dodgers