The Long Fall from the Top 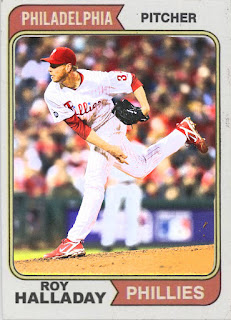 But most Phillies fans can still remember the 'good old days' very well. You know, unless they've died since 2011.

Today, exactly three years ago, Roy Halladay pitched a no-hitter against the Marlins, the first of two this season. He'd go on to win the Cy Young award that season. Also, the Phillies would come short of the World Series, losing to the eventual winners, the Giants.

Three years have passed. What the hell happened?

It reminds me of the movie Anchorman. No, not how overrated it is. I mean in the fact that after Ron is shunned from society, he has this very quick deterioration, and soon everything in his life turns to absolute crap, in the span of probably a couple weeks. In real life, that doesn't happen. In real life, people deteriorate slowly, and sadly. But in movie years, it just takes a few weeks.

That's what this is like. It takes most MLB teams about 5 or 7 years to go from wonderful to awful. It doesn't just happen in a year. Like, 2011 they were still a good team. And then the next season they come back and they're suddenly awful. That doesn't happen! That SHOULDN'T happen! But it did.

Now, there's more of a chance of the Phillies to BE no-hit than to throw a no hitter, and we'll be lucky if Roy Halladay ever throws like he did 4 weeks ago, let alone 4 years ago, again. And while it would be nice if the Phillies got back to the top again, it just seems like the two teams currently there won't let it happen.

But again, who knows. Maybe October will be 'Out of the Bear Pit' territory. Or you know, it could just be another round of 'Pass me another scotch Danny Trejo'.

You know. Like in Anchorman.
Posted by Jordan at 3:29 PM