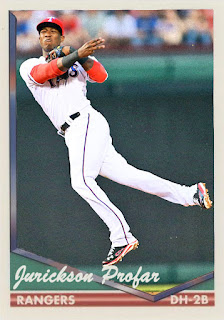 I can't, because I was born a year later. But remember how positively...1994 it was. Not enough to be 1993, but enough to be 1994. I mean, sure, there was a strike that turned a lot of people off of baseball for years, but there was great stuff that year. Forrest Gump came out in theaters. Friends was first premiered on NBC. Foo Fighters released their first album. It was a good year, and it was also a pretty nice Topps design.

I don't really think Jurickson Profar remembers 1994, because, well, he's so young. He's so young that his rookie season, last year, doesn't even count as his rookie season. He's probably 1/3rd of a Ron Washington, 1/2 of a Lance Berkman, and 1/16th of a Jamie Moyer.

But will any of that stop him from having a nice rookie season? Um...you never know. These things can go haywire. Teams fall apart, people get injured. He could certainly have an amazing season, but he's got a little bit of competition in the rest of the league. Remember, Manny Machado still counts as a rookie (somehow), and Dylan Bundy hasn't been called up yet.

Coming Tomorrow- The best closer in the NL. No, really. I swear to God. I'm not lying.
Posted by Jordan at 9:14 PM