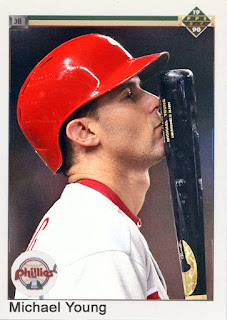 As a lot of you may have noticed, I'm mainly a Topps man. I collect Topps more religiously than any other, I don't collect unlicensed, and I only attempt to complete Topps set. And I only customize vintage Topps. However, I felt like changing that up, since I'm running out of designs. So, I'm customizing some early Upper Deck.

Now, this really ruins the purpose of customs, as they're basically meant to be vintage representations of newer players, and Upper Deck is so far from vintage. However, recently I attempted a 1995 and 1994 custom, and they're not very far from the present. So really, it was bound to happen. Of course, this does bring up a few questions.

Will I do any 2000's customs? Too early to say. Really depends on the set, its general easiness in terms of customizing and watermarks, and the youth of the player I'm putting in. As of right now, probably not, though you never know.

Is the door open for any Fleer, Donruss or Score customs? Yes. However, to a certain point. I'm not looking for designs that are aloft in foil, or crappily done. I might use some early 80's Donruss and Fleer, and maybe a couple fan favorite stuff from the 90's (1993 Leaf? 1991 Studio?) But if the door's open to UD, then I can definitely try some other stuff.

Does that mean I'm phasing out of Topps? Hell to the no. Topps will still be my customizing priority, and it'll always will be. I'll just throw the other stuff in every once and a while just to seem fresh. This Michael Young above is a nice change of pace. I have a Lincecum coming up that also utilizes an UD design. I'm definitely not done with Topps, and I don't think I ever will be.

So yeah. The barrier's been broken. The only thing I won't customize now is football...AS OF RIGHT NOW...

Coming Tomorrow- I haven't done a Dodger in a while, so here's one. Probably the best pitcher in the NL right now.
Posted by Jordan at 9:45 PM
Labels: Custom Cards, Michael Young, Phillies, Upper Deck