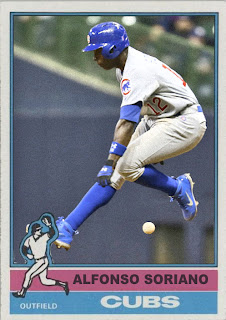 It's weird that this is a profession in which people have to remind the audience that they're still alive. And speaking of reminding people that other people are still around, Alfonso Soriano's still on the Cubs everybody!

Remember back, like 6 years ago, when everybody was excited that he was on the Cubs, hitting homers and playing the outfield? Remember when he was still a dominant prescence in baseball, and not just 'the guy A-Rod was traded for'?

Now, Soriano's best days occur when he actually does something other than strike out, or actually plays through a season without some bone breaking in half. Sad to say, but Alfonso Soriano's really-good-player-to-watch-out-for-that-should-have-a-great-career days are over.

And it's not entirely his fault. As outfielder for the Cubs, he has to deal with playing for a team that doesn't give him the benefits he got while with the Yankees, or the Rangers. Or even the 2006 Nationals. And also, those three teams actually got wins every once and a while.

Can Soriano do anything at all to reestablish his ability to hit consistently? Well, it doesn't look like it, however if he's traded to a team that isn't the Chicago Cubs, maybe he can hit slightly better.

Coming Tomorrow- Once again, on the subject of the Rockies...damn. Their hot start is boosted by the homers from someone who is FINALLY performing after years of being in the 'prospect' category.
Posted by Jordan at 9:14 PM
Labels: Alfonso Soriano, Cubs, Custom Cards