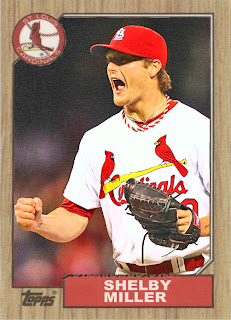 (Yep, I'm doubling up again today. Get used to this.)

I find it very odd that there's a guy in the Major Leagues named Shelby. The only two people I know named Shelby are both women. One's a drummer for a one of those ever popular 'jazz-influenced alternative rock bands'. But I digress.

For someone who hates the Cardinals, the sudden influx of 'the Cardinals are amazing' coverage has made me increasingly infuriated. Hell, the NL is meant to be ruled by teams I do not loathe. We are already failing in this regard. Even worse, the Cardinals pitching has gotten so good that Sports Illustrated has already made them the cover-boys ONCE. Dare they do it once more.

I realize of course that a lot of them are actually worthy of merit. Shelby Miller is really pitching something wild for the Cardinals (nobody is allowed to get this pun), as are several of the other pitchers. Carlos Beltran, as usual with teams outside of California or Texas, is playing extremely well, bashing homers left and right and solidifying his status as a player too good to be considered for the Hall.

Still, I find it inclined to hate them once more. In approx. one month, if they're still the #1 team in the NL, I will make a custom of David Freese, or some other hated Cardinal. Really.

Coming Tonight: The reigning AL MVP, and all around good player.