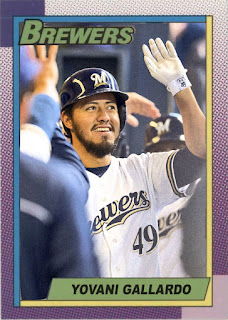 Have you ever bought something, like, say a box of Triscuits. You pick them up at the supermarket because, hey, you like triscuits, they taste good, you might keep them around just in case. And you place them in the pantry, and expect to take a nibble at some whenever possible. And then a funny thing happens- you forget you even bought the Triscuits, and you keep on going in life, moving onto other snacks, and finishing them. Then one day, about 3 months later, you find the box of Triscuits, still unopened, collecting dust, and exactly six days past its expiration date. Just to check, you taste one, and your neglect for their well-being has turned them stale.

I mean, not word for word.

Everybody's had something like that. Be it a jar of pickles, a can of baked beans, a bottle of Tabasco sauce, or the one time you bought 3 bags of Bugles because they were on sale, not realizing that you can't stand the taste of whatever the hell Bugles are.

(Speaking of which, what the hell are Bugles? Are they corn-based, are they potato-based? Are they just some starchy stuff that was left from what the tasteful snack execs took?)

This custom of Yovani Gallardo is my dust-covered box of Triscuits, my month old can of baked beans, my rightfully neglected three bags of Bugles (evidently sized to fit a nonexistent family of people who enjoy Bugles). I made this custom a few weeks ago, and for whatever reason, not unlike Salt, and/or Pepa, I kept pushing it. I'm not saying I pushed any salt or pepper away, unless I needed more space on the table. But I digress (tm, G. Gagliardi, you don't know him).

I believe I would push this custom because I have a rule, a very Aspergery rule (which is fitting, since I'm a very Aspergery person), that I can't post a custom of a team or a design if there is one of the same team or design still within the last 7 pages. This is similar to my habit of waiting until 5 minutes after the last person in my house has showered to go in myself, to wait for the water to heat back up. It's silly, it's trivial, but it provides me with some of the tiny fibers of solidarity one needs at this age.

(This age is 17, by the way. Stop the snickering, you 40 year olds. And be thankful you don't have to complete persuasive essays on what exactly Nathaniel Hawthorne was trying to convey in writing the worst waste of paper ever accomplished.)

I forget when I even made this. I think it was during the whole 'Brewers in first place' phenomenon, right after the big Gallardo game where he pitched well and hit the home run.

That one. Nobody else remembers this. More people remember details from the aforementioned waste of paper than the game where Gallardo hit that one home run. April, even though it's not that far behind, seems very far behind.

But still, I found this custom today, sitting in my customs folder, still looking new, unused, and a little tasty. So I looked at it. And the sole difference between this and the box of Triscuits in the pantry is that this has the same style, the same overall feeling, the same enjoyability that I looked for when I made it last month (?). Custom cards, I've found, don't go out of style. Unless they depict Kosuke Fukudome, Daisuke Matsuzaka, or Zach Day. And for those of you snickering at that last one, I think I've proved my point.

So don't think of this custom as the stale box of Triscuits you find in the pantry after three months. Think of it as the box of Triscuits you find in your pantry after you've polished off the Cheez-Its, take a bite of one, and discover that it still has the same feel as before. I'm not saying Gallardo and the Brewers are as big as they were 3 weeks ago, but the custom is still as nice as when I made it.

At least there's that. At least the seven days until I post another one of the Brewers I made when they were big in April won't be completely useless.

And yes, that was meant to be ironic. Irony, not unlike Triscuits, doesn't go out of style.

(P.S.- Unless any Nabisco execs are reading this blog, in which case OH MY GOSH, SOMEBODY'S READING MY BLOG, I don't do ads. Or ad campaigns. For snack foods.)

(Two really good posts in a row, for those of you reading. Tune in tomorrow to see if I break my streak.)

Coming Tomorrow- A pitcher who hasn't really gone out of style yet, so I'm posting his custom before he does.
Posted by Jordan at 10:24 PM