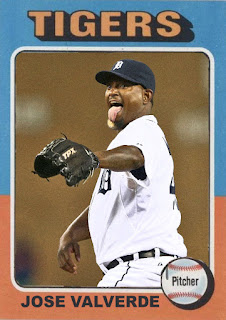 I know I've had a very inconsistent May, with notable gaps in posting all throughout. Being that you can't stop laughing at me, flaunting your chin bush and inadvertently conjuring the ghost of Scott Spiezio, I really have no choice but to explain some of my absences.

For one thing, I'm currently rounding out my junior year of high school. My teachers thought it would be fun to slam me with a gigantic research paper and a large project for health in the same week, and the same weekend, for God's sake. So, in trying to finish those, I may have missed some precious posting time.

Also, I have the priorities of a teenager, in that sometimes I was busy watching Donald Trump fire a few has-beens, rather than actually posting a card. I know it's a Cardinal sin to prefer watching Celebrity Apprentice to posting on the blog, but not ALL of those nights were spent on Trump. For instance, my Wednesday nights were always kinda tricky, as I was watching Survivor's credibility slowly slide down a hill. But I digress.

The main reason for these gaps in posting is probably the fact that May, the busiest month for pretty much everybody, was the exact time, in the perspective of my personal computer, to inexplicably stop working. So a lot of the time the PC was going through scans and/or getting its memory rebooted whilst singing 'Bicycle built for two', and therefore I really couldn't post a custom. Thankfully, this problem has since been remedied, as we've recently bought a new, sleeker, sexier box for the computer, and it's been working swimmingly ever since. Matter of fact, I'm writing this post on IE8. It's so awesome, but keep in mind that this blogger has never fully experienced the joys of a Mac computer. So there.

Either way, I'm inexplicably back on my old stance, for no other reason than a simple joy to do exactly what I was doing last year to the same amount of boos. Just like Jose Valverde.

(P.S.- The upside of all this? Customizing takes less time, so I can probably do a lot more per sitting. Which is nice for the three of you who still enjoy them.)

Coming Tonight, since I gotta get my consistency back: What's this? A custom of an UPPER DECK card? Is this a myth? Is it an imaginary tale? Is that a slumping former Rangers third basemen in Philly?
Posted by Jordan at 11:45 AM
Labels: Custom Cards, I'm not dead yet, Jose Valverde, Tigers