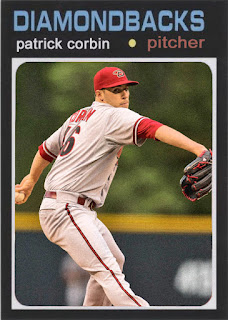 There's been a lot of talk about the Cardinals rotation, to the point in which it sickens me. I mean I get that those pitchers are great and all, but A.) Jamie Garcia's not pitching too well, B.) Lance Lynn isn't as good as he was last June, and C.) It's the fricking Cardinals.

Besides, there are more worthy pitching rotations in the NL worthy of merit. The Cardinals pitchers are getting all the hype, complete with ESPN love and Sports Illustrated cover stories. Yet they're not the best rotation in the NL. They are the most overhyped rotation in the NL. That doesn't always amount to field performance.

The Nationals' rotation is doing beautifully, with Jordan Zimmermann and Dan Haren having great seasons. The Giants' rotation, as per usual, is doing a fantastic job, despite the usual downgrade from Lincecum, with an addage of some great starts by Zito and Cain.

But there isn't a Nat or a Giant at the top of the post. Because the last time I checked, Patrick Corbin plays for the Diamondbacks.

Now I know what you're thinking. JORDAN!, you mentally exclaim. YOU'RE WRONG! YET AGAIN! The D-Backs rotation is FAIRLY DECENT at best, and isn't as good as you're making it out to be.

First of all, thanks for checking out the blog.

Second of all, I'd like to prove you completely wrong, by examining the rotation one-by-one.

5. Trevor Cahill. Trevor Cahill isn't really the greatest starting pitcher in the world. He was okay in Oakland and he's okay here. This is why he's the fifth starter. That's a bad example. Bear with me.

4. Brandon McCarthy. Head-injuries aside, when this guy's on, he's REALLY on. He pitches very well in those situations, and that was evident last season in Oakland. This year he's waned slightly, but he's still a strong pitcher, and he's still capable of pitching well.

3. Ian Kennedy. I'm putting him third because of his season-to-date, but in any other season he'd be the number one reason to watch the rotation. For a while he made me regret the Yankees let him go in the Granderson deal. He's raw talent, great materials, and he's a great pitcher. 2011 especially was a great year for him, and he's remained a solid, consistent starter. I hope he gets back up to speed.

2. Wade Miley. I've already talked a lot about Wade Miley, but lemme reiterate- this is his second season, and he's already finished high in ROY voting, and somewhat in the middle of Cy Young voting. He's a strong young pitcher, one who a lot of people have already taken notes on. He does everything he's supposed to do, and that certainly helps.

1. Patrick Corbin. So far the man is undefeated, which already says a lot. This is his second season, and while he didn't make the splash that Miley did, he's certainly heating things up now. Also, in his last start he had a complete game, striking out 10 and reclaiming his spot at the very top. He's good, and hopefully he'll continue to be good. I hope. I better not have jinxed him.

So there. All five of those guys can give you a confident start, as well as some major strikeouts. That's a solid, consistent rotation for you.

And if they keep it up, this team will be very, very big come September.

Coming Tomorrow- That annoying closer I talked about yesterday.
Posted by Jordan at 10:47 PM