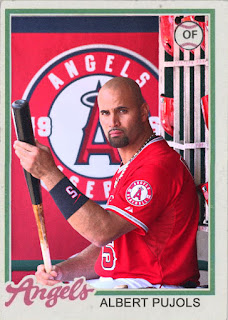 First of all, that custom is probably one of the best I've done in the five years of doing customs. It's like something you'd see in the 1970's. Or maybe a 70's movie.

I don't talk about this very much, since this is a baseball card blog, but I have a very keen interest in the art of cinema. I don't just review movies, I dissect them. I'm tall and thin enough to be a younger Gene Siskel, all I need is the impending receding hairline.

But tonight, I saw the latest film attempt at reviving F. Scott Fitzgerald's The Great Gatsby. And, here's what I have to say about it: It has all the materials. Big stars, lots of cash, a reliable man behind the action, great locales, a trusted source material. Yet, it pounds so much in there that at times there just seems to be something amiss. And for every time where something is just like F. Scott intended it, there are more where it just doesn't work.

One could compare the new Gatsby movie to the current Angels team. Several have. More will.

Pujols is like Leo DiCaprio here. He's doing all he can to make things golden, and make the whole thing a hit. His performance alone boosts attendance, and rises the entire morale of the project. Hell, the whole thing's turned into his vehicle at times, not even realizing the rich history. And still, I imagine Pujols, like DiCaprio, will go on to higher fame and more accolades in the future.

Of course, for every performance that is right on par, you have someone like Josh Hamilton, or Tobey Maguire. They seemed like a logical choice for this role to begin with, but for whatever reason it doesn't work. They can't perform to the caliber that they did in other roles. Hell, even in those other roles you could argue that it wasn't 100% perfect. And here, it doesn't seem like it's genuine. Like maybe he's trying too hard to please everybody. Nothing's natural. And it's sad, too.

Then you have somebody like Mike Trout, or Joel Edgerton in this situation. They're younger, they're new to this game, and they do exactly what they're supposed to. So really, they're both doing things exactly right. I have really no complaints from either man, just as long as they keep moving at a steady pace after this.

But then there's Chris Iannetta, or Carey Mulligan. I really never got their appeal, and I don't think they really work in this sort of situation. In terms of their role, I could think of 20 other people who could work a lot better than they do in it. Hell, I imagine 20 different people have passed through before they signed on. And here, as well as everywhere else, it just doesn't do it for me. I don't know if it does it for anyone else, but it really drags everybody else down.

Everyone else plays their roles well, in smaller ways. But overall, it's too overstuffed, too grand, and too...big to really flow well. And that's its overall flaw. Don't get me wrong, I think that both the movie and the team had so much potential at the start of the year. But it didn't really pay off to anything. People are very let down.

But that's what I have to say, about the Angels, and Gatsby. If you want a thrill, regardless of the flaws, go and see both.

Coming Tomorrow- The Brewers have since gone down in the standings, but here's their top pitcher anyway.
Posted by Jordan at 10:50 PM