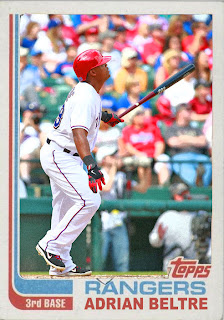 Well, somehow the Rangers did it. Despite their big stars leaving, and some unreliable replacements, the Rangers have managed to once again reclaim the top spot in the AL West. And since they aren't the Yankees, this is being met with a collective 'meh'.

Good news is that Adrian Beltre, once again, is having a great season. I think he's been stellar every season he's had with Texas. And now, there he is, one of the anchors of the lineup, hitting well and playing well. I'm glad he's been a lot more consistent since the Overrated days.

Not much else to say about another filthy Ranger. Except that I love that custom.

Coming Tomorrow- I don't care if he hasn't hit well in 2 seasons. He is still, without a doubt, the best player in baseball.
Posted by Jordan at 10:22 PM
Labels: Adrian Beltre, Custom Cards, Rangers