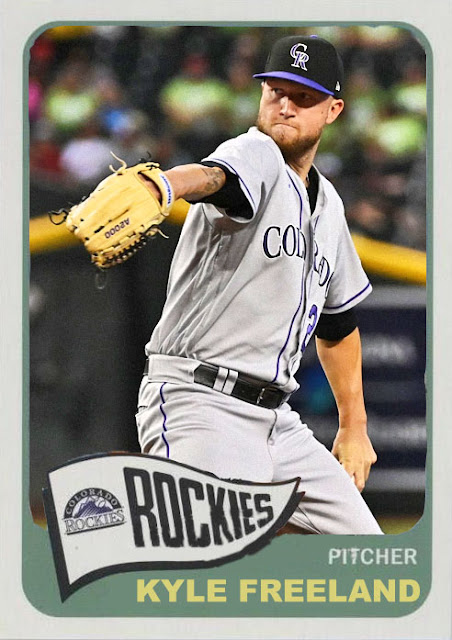 I still think it's very funny that in all the rebuilding the Rockies have done over the past few years that the only homegrown starter they've managed to let leave has been Jon Gray, and that was just last year.

It's admirable. German Marquez, Kyle Freeland and Antonio Senzatela all still pitch for the Rockies. Now I think what's made them stick around is that they haven't all been good at once. Freehand had his big 2018 and then fell off only to slowly build back over time. Marquez had some huge years towards the end of the 2010s then has struggled in the last two. Senza's been all over the place, going from unreliable in 2019 to the closest thing the Rox had to an ace in 2020. And this season, all three are relatively okay. Freeland's having the best season, with a 4.56 ERA and 89 Ks, but this isn't as good as it was in 2018 under a better team and a younger arm. Marquez, with his 5 ERA, is either cooked or just sick of pitching in Denver. Senza has improved in his last few starts but still has an ERA around 4.5 and a 3-6 record.

And the thing is, they have these three locked up for a little while. Marquez could leave after next year, but Freeland and Senzatela will be here until roughly 2026. So the goal is to keep these guys here, competitive streak or no, and train the new guys. And...look. I am fine with the current strategy of bringing in cheap options and hoping the prospects eventually blossom, but it's less than trustworthy so far considering that the prospect in question is Ryan Feltner and he still hasn't figured it out. The Rox have been trying Jose Urena, and while he's been responsible for some hair-raising defensive plays, he's only sporting a 4.86 ERA in 7 starts. Austin Gomber is alright but he's not quite playing as well as he did in St. Louis.

That's the main problem with the Rockies. Yes, they have a lot of guys pinned down for a while, but the room they're leaving for new talent isn't always letting the right people come through. The Rockies have put their eggs in the baskets of a lot of people like Pat Valaika, Peter Lambert, Sam Hilliard and Dom Nunez, who haven't exactly repaid them. Am I just gonna assume some of these people like Ryan Feltner, Elehuris Montero, Alan Trejo and Colton Welker are in danger of falling into that category as well. There's a good core in place right now with Cron, McMahon, Joe, Rodgers and co, but what this team really needs is a steady roll of people who can carry the team afterward, like what's happening in Houston right now. I hope they can get that, and that Freeland and Senza will be able to help.

Coming Tonight: Last year they said he was a bust. And yet here he is.