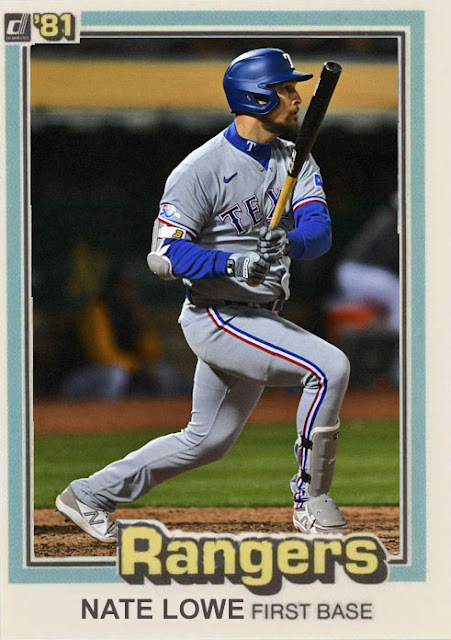 The Texas Rangers. Prior to the season they had the hope to compete. Now they have no Calhoun, no Gray, no playoff chances and no manager. So it's going great.

Look, say what you will about Chris Woodward, I actually thought he had a decent head on his shoulders and was enough of a fit for the Rangers to stick around. I do, however, find it very funny that he lost his job the same week that Tatis got suspended. So he had maybe 3 or 4 days to gloat and then he was out. And they're shaking up most of the team, too, so it's gotta be crazy over there.

The Rangers have thankfully gotten nice seasons out of Corey Seager, Marcus Semien and Adolis Garcia, so it's not all a wash. They've also developed an excellent bullpen thanks to Brock Burke, Joe Barlow, Matt Moore, Brett Martin and Jose Leclerc. And, again, they've gotten such amazing material out of Martin Perez that it's a wonder they let him go in the first place. Unlike the Cubs, a lot of this is contracted stuff that can be built off with the rise of a strong youth movement.

And we're sort of beginning to see that movement come up? Ezequiel Duran and Josh Smith have been up, and they've both taken to the majors pretty comfortably. Smith's average is down but he and Duran have been a fun rookie platoon at third base. Nate Lowe is a pretty steady power bat at 1st, and is having more playing time than he ever did in Tampa. Jonah Heim is the starting catcher, he's a key part of the team. They have this rookie named Bubba Thompson who can hit for contact. I honestly missed having a major leaguer named Bubba. What a country. And Cole Ragans has started 3 games for the Rangers. He's not 100% acclimated to MLB pitching yet, but I reckon he will be soon enough. Ragans, Otto, Dunning and Alexy is a strong little core of starters.

Also...Kohei Arihara is still on this team? Why did I think they DFA'd him at the end of last year? I guess Arihara's still here. He was alright in his first start back. I get the sense he's gonna eventually Kei Igawa his way out of the leagues, but I understand the Rangers' point of view, it worked perfectly well the first time.

There's a lot of messiness on this Rangers team, but I do think these pieces are gonna form the next decade of Rangers baseball, and I do think they'll be a competitive nuisance within a few short years. Won't that be fun for me to cover on here.

Coming Tomorrow- A mid-level starter who really thought his team would be more competitive than it was this year.