Too Lodolo for Zero 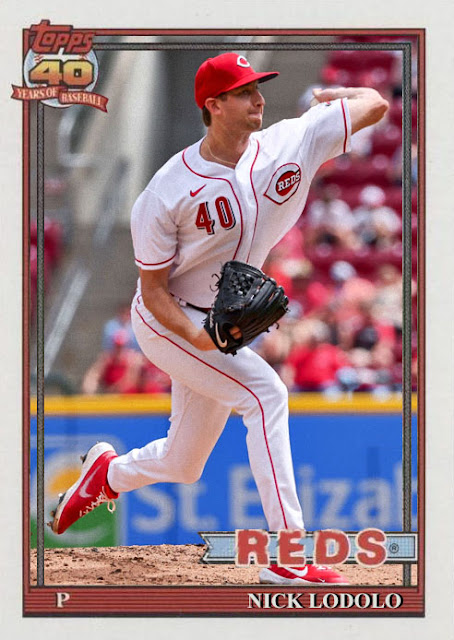 I will give the Reds this, they are nowhere near as bad as they were earlier this season. In April they couldn't find a win even if it bit them in the ass, and now they're at the lead of a three-team platoon for third. Like the other NL Central conundrums this year, it's not known whether the Reds will earn 3rd place in this division by being the least bad or the closest to good of the three.

It's odd that this rebound is happening now, as the team is without Luis Castillo, Tyler Mahle, Brandon Drury, Tommy Pham and Tyler Naquin, responsible for a combined 8.3 WAR. Right now the team's highest-earning player WAR-wise is Graham Ashcraft, a 24-year-old rookie with a 5-2 record and pretty plain stats all around. The team's best remaining hitters are Jonathan India, who missed 3 months due to an injury, Kyle Farmer, who's a lesser-lineup force on a better team, Nick Senzel, whose defense is wounding his year, and Aristedes Aquino, who, despite some power numbers, is still hitting below the Mendoza line. And key pieces such as Tyler Stephenson, Tony Santillan and Connor Overton might be out for the rest of the season.

So...with all of this gone or compromised...how is this team doing all this NOW?

I guess a lot of it has to do with this surprisingly good rotation? Hunter Greene is gonna miss a few starts, but even before the injury he'd clearly figured a lot out, with 127 Ks in 20 starts. Ashcraft has become a competent, admirable arm without being too spectacular. Nick Lodolo is coming into his own, and somehow has the highest K-per-9 ratio on the whole team [and remember, the team includes Hunter Greene]. And last night Justin Dunn FINALLY came off the IL, and while he did give up 2 Mets homers, he did give a promising start considering all the missed time. Having a competent assembly of arms, even after being picked by trades and injuries, is definitely a start. I honestly think Greene-Lodolo-Ashcraft-Overton-Dunn could be the answer for a bit if they all stay healthy.

The rest of the success is just throwing people in different holes. Donovan Solano is still miraculously a great bench piece. Jose Barrero is hitting and had a great night the other night. Michael Papierski is at least an intriguing choice at catcher. Matt Reynolds is the Jace Peterson of the team, in that he's accomplishing a great deal without providing a single noteworthy statistic. Albert Almora is still making insane leaping plays in the outfield. There are players doing good things for the Reds, but they are mostly replacement players, so they'll have to think of long term solutions.

Overall, though, this could be a lot worse, but for a team with no competitive aspirations, it's not exactly a dignified end to the year.

Coming Tonight: I'll say this about the Oakland Athletics: one thing they haven't had to worry about too much is relief.