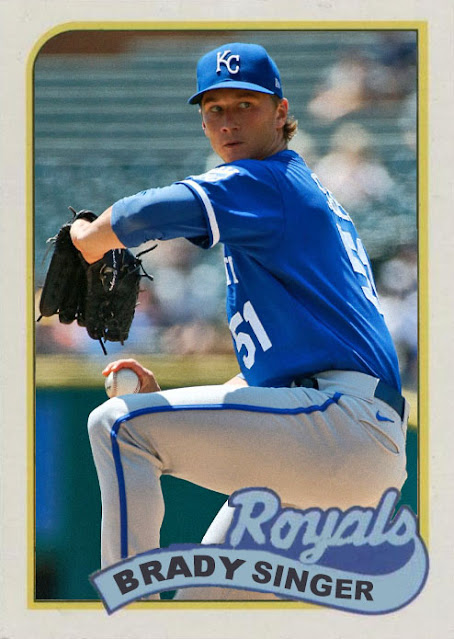 In one fell swoop, the Kansas City Royals lost an outfielder, a second baseman, a third baseman and a backup catcher. But, remarkably, lost no pitchers, and, in fact, GAINED a pitcher thanks to a deal with Arizona. So even if 2022 seems to be a wash...this team still is looking good for the future.

I'm still kind of stunned that even potential deadline targets like Brad Keller and Scott Barlow stuck around. Both are having great seasons, both get to finish them in KC. This is good. Additionally, the host of young pitchers remains. Brady Singer, after starting the season in the bullpen, has become the team's best starter, and leads the team with his 3.67 ERA and his 94 Ks. Daniel Lynch and Brad Keller are also having decent seasons, as was Jon Heasley before he got trapped under Zack Greinke's return. Kris Bubic isn't having the greatest season, but he's still a long way from where he was earlier. And then you have all the bullpen arms, like Dylan Coleman, Josh Staumont and Taylor Clarke. You're even seeing some further signs of this team's future with Angel Zerpa, but...MAN did he pick the wrong time to get injured. I am seeing some real promise from that guy, and he just keeps getting real unlucky.

The youth energy has also spread to the rest of the team, with Nick Pratto going from a vax-drought fill-in to, well, a major candidate for the starting 1st baseman slot. Pratto's only hitting .184, but those power numbers are intriguing. Having him and Bobby Witt together is cool, cause they could be running this team in a few years. Same with M.J. Melendez, who, while he's not having the greatest season, still has 11 homers as a catcher. And now people like Nate Eaton and Michael Massey are up and hitting, and...are we really seeing the next stage of this team form before our eyes?

I mean, maybe it's the injuries and trades that have made room for it all, but the next generation of Royals is looking pretty damn good. Maybe not good enough to completely run the team yet, but it's the kind of youth movement that they should be pretty impressed with right now. Bobby Witt's having a great rookie year, and that's just the tip of the iceberg.

There's gonna be more slots opening up as veterans leave. I don't know what Zack Greinke's planning for next year, but I do think there's a chance of a rotation spot opening up. Perez is only on the first year of his contract, but when he feels like it's time to move to DH full time to let somebody like Melendez or another rookie to own the position, I think he will. Mondesi might even get cut, because he hasn't been around much the last few years. I do think next year is going to be very telling in terms of where this youth movement is with its development. They could be ready for a trial run. It could be a year or so away. It's gonna rely on a lot of factors, but...you never know when these guys will be ready.

After all, the Royals always come out of spring training hot. Who's to say they won't just...forget to come back down soon enough?

Coming Tomorrow- A fun rookie for the Cubs who's been completely overshadowing the Cubs rookie I thought would be the big story this year.