Sox to be You 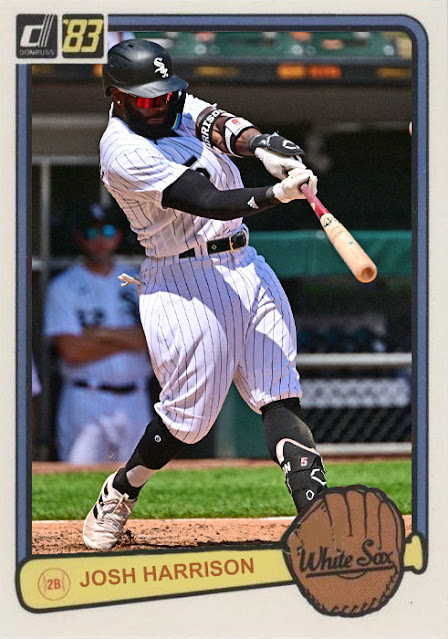 You know...it's really hard for a team to have a serious postseason attempt when they get 21 runs scored against them.

I don't care if it's against the Astros, who have an offense that is rightfully feared by most teams. Dropping 21 points to ANY TEAM is not good. And for those runs to come against Lucas Giolito, who used to be such a great pitcher but mysteriously stopped being good around the time umpires started checking for tack, seems like more of an insult. The White Sox banked so much on Giolito being their ace, much like they banked on Lance Lynn being healthy, and both have let them down this year.

I do want to say that the Astros scoring 5 runs off of Vince Velasquez is something I did see coming. It's kind of his thing.

What's very funny is that the one White Sox pitcher today to allow the fewest amount of earned runs is the guy at the head of this post. Infielder extraordinaire Josh Harrison. As documented by Topps in their 'pressed into service' insert set a while back, Harrison has pitched before. He's...a position player for a reason, but he could always be an option. He gave up 4 earned runs today, which makes him an ace in comparison. Nothing even remotely close to Darin Ruf, who shut down the Braves the other night when no other Mets pitcher could, but...he did the trick.

Forget that the White Sox were actually doing well pretty recently. Forget that Dylan Cease, Johnny Cueto and Michael Kopech have been excellent starters this year. Forget that Luis Robert, Eloy Jimenez, Yoan Moncada and Yasmani Grandal are all healthy right now. If you're gonna give up 21 runs, you need to seriously look into how you're doing things. And...the White Sox still refuse to let Tony LaRussa off the hook, even if he is clearly one of the sources of the troubles this year. I thought LaRussa was wrong for this team the second he signed, and I think that any of the guys who HAVE lost their jobs so far this season, including Chris Woodward, Joe Girardi, Joe Maddon or Charlie Montoyo, would be better fits for it. Even Girardi.

This is actually a decent White Sox team, and they've made a lot of strides since the All-Star break to get back up the wild card ladder, but...this was never supposed to be a Wild Card team. This team was supposed to be a division competitor like they were last year, and thanks to injuries, banking on the wrong guys, and, cough, MANAGERIAL WOES, it hasn't happened. The Wild Card race is getting awful crowded, and with 21-5 losses like today's, it's become less and less likely for the White Sox. It's gonna take something incredible for them to catch up. Not impossible, but...you try getting past the Orioles right now.