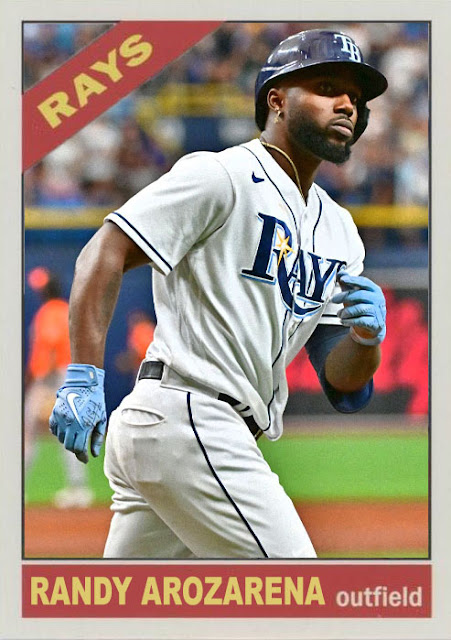 Welp...not only are the Rays really good again, but they're proving this by completely embarrassing the Yankees this week. A complete low-budget team that's still injury-laden and lacking in pure a-list talent holding the Yankees to like a run. Amazing.

The Rays have lapped the Blue Jays in the standings, and it's looking once again like the Rays are making a solid run at the postseason. Yes, we all thought the Yankees' main rival for the East would be the Red Sox or Blue Jays, but once again it seems like these Rays matches are gonna be worth the most, especially after this one has gone in favor of the Rays to such an extent. Unless the Yankees just don't WANT to get hits off of Jeffrey Springs, Jason Adam and Jalen Beeks because they don't wanna be associated with homophobes or something. You know, the John Rocker thing forced their hand.

The Rays at this point are even getting production from people who had slow starts to the season, like Randy Arozarena, who leads the league in homers with 16 despite trailing Isaac Paredes for most of the year. And while the injuries to Wander Franco, Kevin Kiermaier and Manny Margot have hurt the core of the lineup quite a bit, they just got Harold Ramirez back, and he's had an excellent season so far, hitting .328 with 35 RBIs.

I also still can't believe the Rays rotation can still keep people down without Tyler Glasnow, Shane Baz, Josh Fleming or Yonny Chirinos. McClanahan and Kluber I figured would be good at keeping people down, but Jeffrey Springs has become a solid starting option with a bit of a breakout, while Drew Rasmussen has his ERA under 3 now and is pitching really well. Yes, Yarbrough is still having troubles, but considering all the injuries, he's better than sliding another reliever in there [although, seeing as Springs was primarily a relief option before, is he?]

The Rays may just be scrappy enough to go deep into the postseason, which would just be really annoying for me. They've become one of those teams that always do well, and even though the Yankees are still the alpha in this division, the Rays, as they've tended to in crucial moments, have the momentum, and that could be dangerous if they keep it, and if the Yankees continue to be this aimless.

Coming Tomorrow- A rookie who hits a lot of home runs and picked the exact right season to come up in Philly.