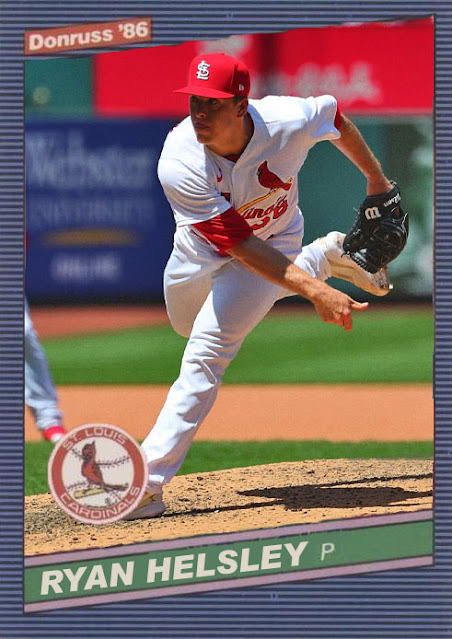 Okay. I sort of get why Ryan Helsley made an All-Star team this year now.

Like...yes, there is still something that irks me about nominating a middle reliever nobody's heard of to something called an All-STAR team. Irked me when Kevin Cash nominated Andrew Kittredge last year as a way of flexing his managerial power, and it irked me here. But...Ryan Helsley has a 0.79 ERA, folks. 0.79. He has allowed 16 hits, 2 home runs and 4 earned runs over 45.2 innings. He also has 67 strikeouts and 11 saves in that period. For comparison's sake, Dakota Hudson has pitched 105 innings and he only has 56 strikeouts. Helsley has a 2.2 WAR, the highest of any pitcher on the Cardinals, especially after Miles Mikolas got lit up by the Rockies the other night. The Cardinals hyped Helsley as a major rookie to watch in 2019, and now he's doing exactly what the team said he would as a reliever.

So...I do get it. Helsley's really good this year, he's been untouchable in relief, most teams would be lucky to have him. I'm happy he's having a great season. As we've seen from Jordan Hicks, it's something that's hard to make a career out of.

The Cardinals, by the way, are in 1st place, have two MVP candidates and a couple Rookie of the Year candidates, are zooming towards postseason obviousness, and...you know, I think earlier in the season I was caught saying on here that I didn't hate the Cardinals anymore? Uh...maybe not 100% accurate. These guys are just really damned good at baseball, and have taken the steps to ensure that they will be for a while. Even if you can't help but respect it, it's maddening when it feels like EVERYBODY is good.

I assumed that Paul Goldschmidt would be a lock for the MVP last month, but now Nolan Arenado has sped in with his 6.0 WAR and his .304 average, and now he's getting the spotlight. It doesn't matter to me, they're both probably Hall of Famers and neither's won one before, but this is getting ridiculous. Also, the rookie movement is becoming even more ferocious, with Lars Nootbaar performing to scale and having amazing plays in the outfield, Nolan Gorman third on the team in homers with 12, and Brendan Donovan playing the Edmundo Sosa role of playing everywhere and hitting like hell. Additionally, the Cardinals picked up two sharp arms at the deadline and they're both excellent through two starts. Nobody should be shocked that Jordan Montgomery is playing well as a Cardinal, considering that the Yankees never should have dealt him in the first place.

It's now likely that the Cardinals could be a high seed in the playoffs and knock out some deserving contenders. I am still of the mindset that with the additions of Arenado, Goldschmidt, Edman and Helsley, this team isn't as perfunctory as it usually is in this half of the season and has a bit more bang for its buck this year. That doesn't mean I'm gonna be overly thrilled if they go all the way, but I do like these guys more than I usually like a Cardinals team.

Not an especially glowing endorsement, but you don't expect me to change TOO much, do you?

Coming Tomorrow- Oh hey, someone who pisses me off more than a lot of Cardinals do.