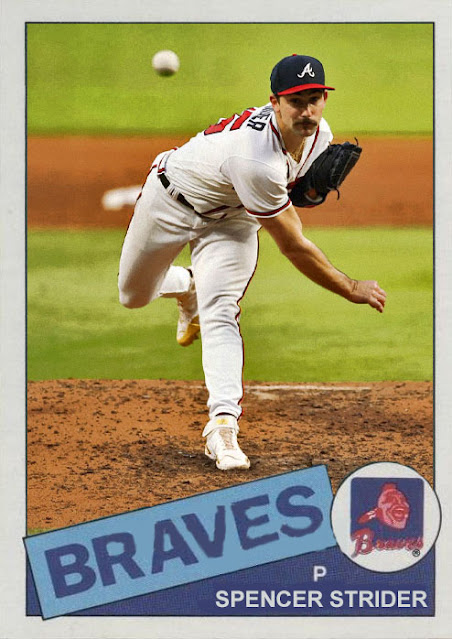 The Braves accomplished a great deal of what they did last year thanks in part to loaned, older veterans. So how do they rebound the following year without completely running out of steam like the Nats? Easy. They call-up some really good rookies.

As much as the Braves season can be defined by people like Austin Riley, Max Fried and Ronald Acuna, a lot of this season has been as vibrant as it has thanks to the younger players. I suppose William Contreras technically doesn't count as a rookie, but there are actual rookies who have made this a nice year for the Braves. For instance, Spencer Strider, who last month was getting some Rookie of the Year buzz, has gone from a bullpen option to starting to being a can't-miss starting pitcher. Strider has a 3.11 ERA, a 6-4 record, and 138 Ks, seconded only by Charlie Morton for team charts. Strider peeked into the majors last year, but not enough to make much of an impact before 2022, so now he feels ready and fits right in with Wright, Fried and Anderson.

Similarly, Michael Harris II was called up around late May and tore things up almost immediately, playing some incredible defensive baseball and having stellar contact numbers. Harris is hitting .294 with 11 homers and 36 RBIs, and has a 2.7 WAR, fifth highest on the whole team. In a year where the Braves were thinking of going with a Acuna-Rosario-Duvall outfield, Harris has been a pretty nice upgrade, and is helping the team look towards future aspirations. And with Olson, Acuna and Riley all locked up, it's a nice thing to be thinking about these days.

And then just this week, the Braves brought up Vaughn Grissom to play 2nd base while Arcia is hurt, and already HE'S hitting .429 with a homer and 2 RBIs in his first two games [I wrote this Saturday night]. I equate Grissom to sort of the Nico Hoerner call-up, like bringing him up when every other option doesn't work, so while I see him more as a depth option for the future, it's great that he's already hitting and ready even now, at only 21. I hope the Braves have room for him once Albies comes back, but it's a great sign that he's already playing beautifully.

The Braves have all this great young energy, and a lot of great players doing what they're supposed to. They've lost some ground and are now only 3.5 games ahead of the Phillies, but they're in line for a wild card spot and could go on a similar postseason run to the last couple of years. The Braves have a lot going for them this year, and it'll be interesting to see how they fare against some other competitors.

Coming Tonight: A kid from Mississauga making waves in Cleveland.