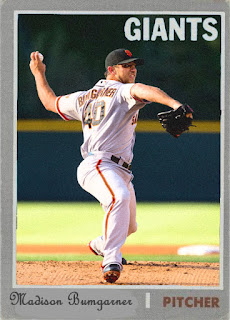 I should have posted this last night, but I got busy. You're getting it earlier today.

I don't think there's been a division less constant than the NL West. I mean...sure, the last few spots have basically stayed the same, but there's been a tight battle for first between the Dodgers and the Giants. And it's getting bloodthirsty.

First of all, the Giants have this guy. When I saw him pitch back in 2010, I knew he was gonna be great. He was young, he was mowing down batters, and he made that rotation one of the most underrated ones in the bigs. Now that the star pitcher has lost his mojo, here he is commanding the rotation along with Matt Cain. This is great for the Giants, who needed him to break out. As for the Dodgers, it's another thing to be afraid of.

In all seriousness, whoever comes out on top in that division will make me happy. I admit that this blogosphere is biased toward the Dodgers, so I kinda want them to win, but if the Giants do, I'll be content.

Coming Tonight-The centerpiece of the monster Boston-LA trade, who's continuing to blast bombs. Only now, he's blasting them over the walls of a 50 year old stadium...as opposed to an 100 year old one.
Posted by Jordan at 9:19 AM