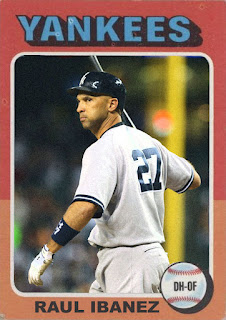 In 2009, the Philadelphia Phillies were stricken with panic. Their star left fielder left for the team they just played against in the World Series. Burrell had gone rogue. They needed a new hope, and a new star, but most of all, they needed a left fielder.

During the offseason, they signed an aging, but still powerful player. Raul Ibanez. The team would never be the same again. Raul Ibanez went on a mad dash in the first half, whopping home runs and reestablishing himself as a competator. He competed in the All Star Game, and rightfully so at that. This sudden spark was not unlike that of Matt Williams in 1994. The only difference is that Matt Williams got help from his friends at BALCO.

The world is unsure of whether Sir Ibanez used any steroids that year. Maybe he borrowed some of Bartolo Colon's Cuban Mystery Cream (tm).  But, after three seasons with the Phillies, the man sought an encore. So he signed with baseball's ultimate competator, the New York Yankees.

They needed a DH. They sure got one.

Raul has been hitting beautifully for us, giving us a homer and some hits when we need it. He's been overshadowed on DH by a roundtable of new faces, including Ichiro Suzuki, but he's still more reliable for a hit.

One never knows if Raul is bound for Cooperstown. But still, he was a consistent hitter on great teams. That's what matters.

Coming Tomorrow- In 2010, Jason Heyward came to Atlanta. In 2011, someone a lot more consistent came, and it was HE that changed the team forever. Don't listen to anything J-Hey tells you.
Posted by Jordan at 9:39 PM