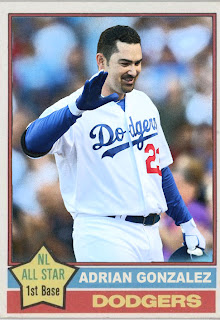 The one upside of this monster trade is that I'll have some custom material for a little while. If Crawford gets healthy, I'll have even more.

I must say, when this guy was with the Red Sox, he was a hitting machine. He was the Sox' best player, this season and last, because he stayed off the DL, and he hit numerous homers, especially the first half of last season. How the Dodgers ended up with him I'll never know. The Red Sox are still...the Red Sox. They're not the Astros, and they don't have to give up their biggest star to a growing team. But they did.

A-Gon has been hitting even more bombs now that he's a Dodger, which is great for fans of the team. I want them to beat the Giants, and I want them to get to the postseason, for Mattingly, for Magic, and for the stadium's 50th anniversary.

Adrian is hitting especially well, so who knows?

Coming Tomorrow- Look up "fun player" in an encyclopedia, and you'll find a picture of this guy, a tremendous journeyman 2nd baseman, spending a season with a winning Chicago team.
Posted by Jordan at 10:10 PM