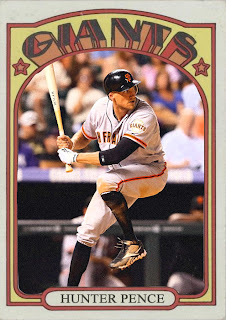 This guy used to hit so well for my Phils...and now he's on the Giants.

It's so sickening to watch,

I mean...he was so good for the Phils. He hit monster home runs, coined catchphrases, and became a Philly hero for approximately 365 days. He was a hero of mine, even to the point of putting his framed custom on my wall. And now he's an effing Giant.

Don't get me wrong, the Giants are a good team, but...honestly, I've kinda singled out the Dodgers in that division's "team I tolerate and therefore back in playoffs" card. Also, a certain blogger cringes every time I say I don't hate the Giants, so I do, I guess. So that being said, it's incredibly painful to watch Pence stride around the outfield next to Melky Cabrera. I guess the one upside is that Cody Ross isn't with them.

Hey...either way, when the Phils got rid of Cliff Lee in 2010, they invited him back the next year, so...hoping for a repeat.

Coming Tomorrow- No, he wasn't traded last week, but last year, for a guy named Greinke. He's finally found his swing in Kansas City, when the rest of the team is failing to.
Posted by Jordan at 9:23 PM