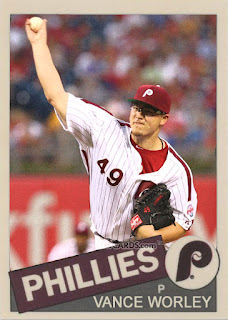 And so Throwback Week comes to a close, with a B-lister Phillies pitcher. I apologize.

The truth is, when Vance Worley is on the ball, he's really good. There were some moments last season, when Vance was pitching well, where we could have considered him a the fourth man of the Inphamous Phour. Oswalt didn't really count anymore, because his win count couldn't even reach four. Or three.

I'm not saying Vance Worley's a phenom. What I'm saying is that he's a fun pitcher that'll get you by. He's slightly more appetizing than Kyle Kendrick or Joe Blanton. Those two have the 5th starter "Who's pitching? Aw, crap." designation. Worley is a fun pitcher, one you want to see pitch.

I just hope he gets back to his A game and makes his games worth going to.

Coming Tomorrow- While I was busy customizing people in old uniforms, a young player took command of the mound near the bay, and made his team a force for first.
Posted by Jordan at 10:11 PM