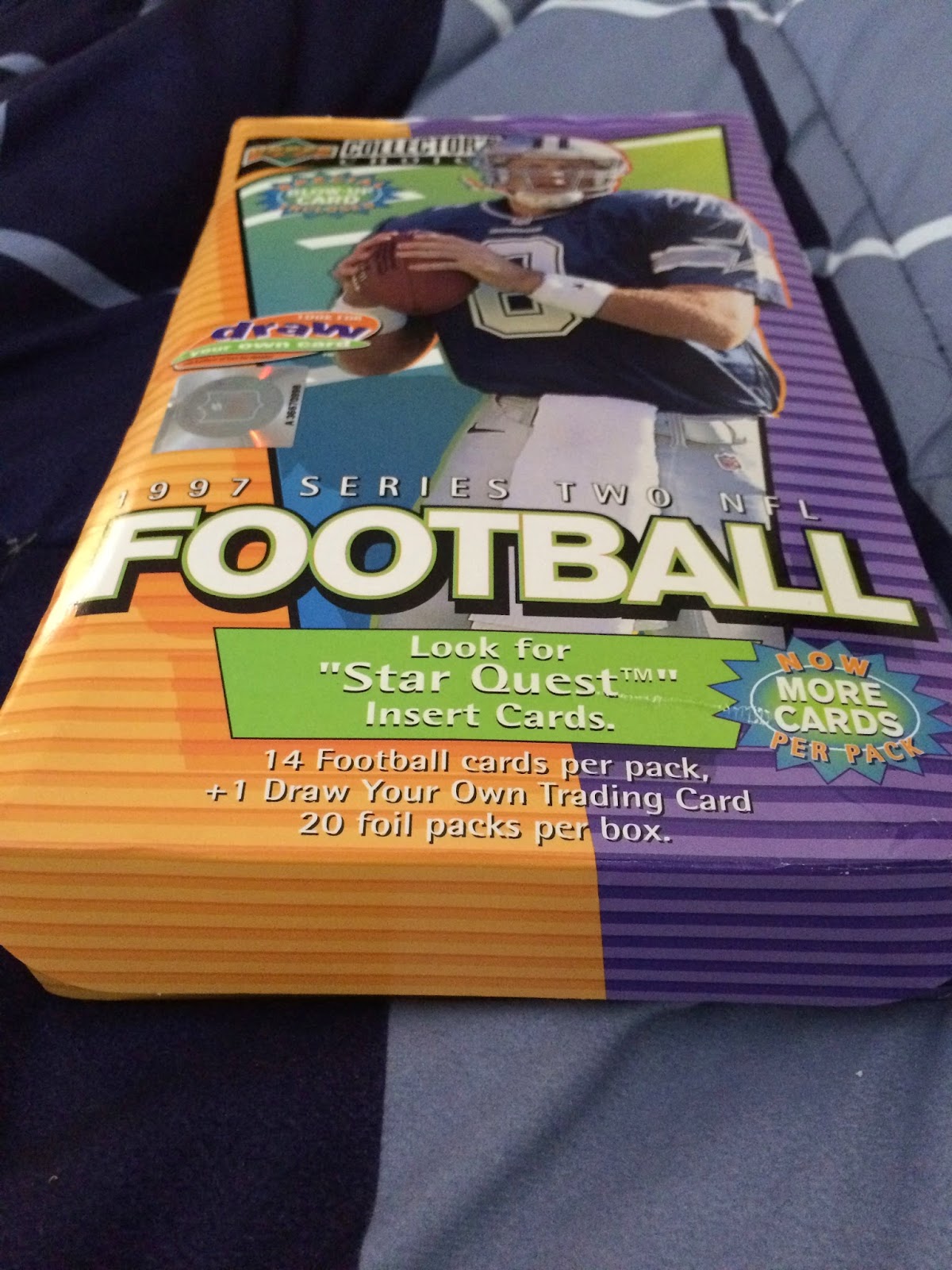 Continuing the theme of waiting until people forget I'm still blogging to post new material, here are another five packs of this wonderful Collector's Choice box. At this rate, I'll likely finish posting this box roughly around 2017. 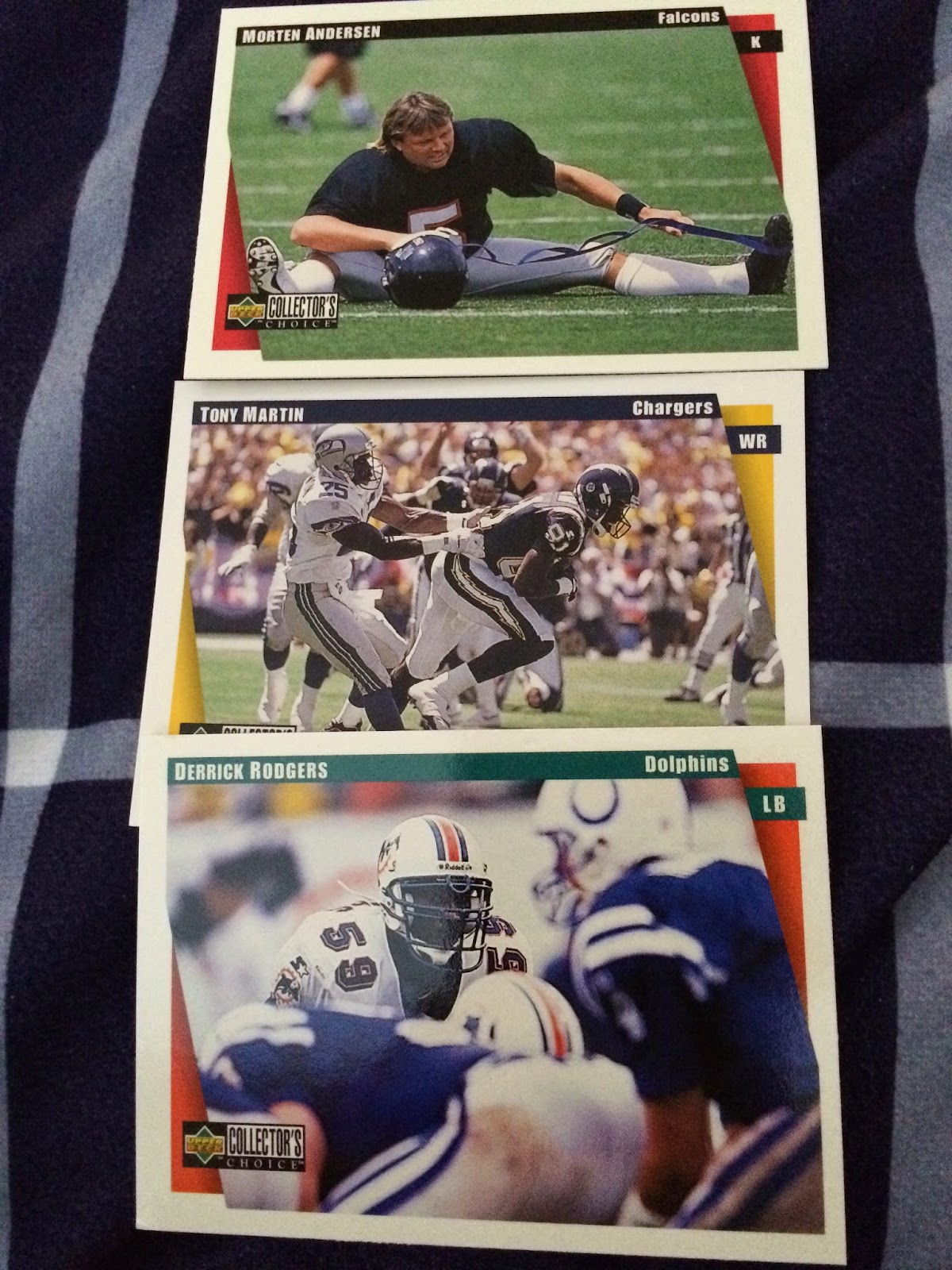 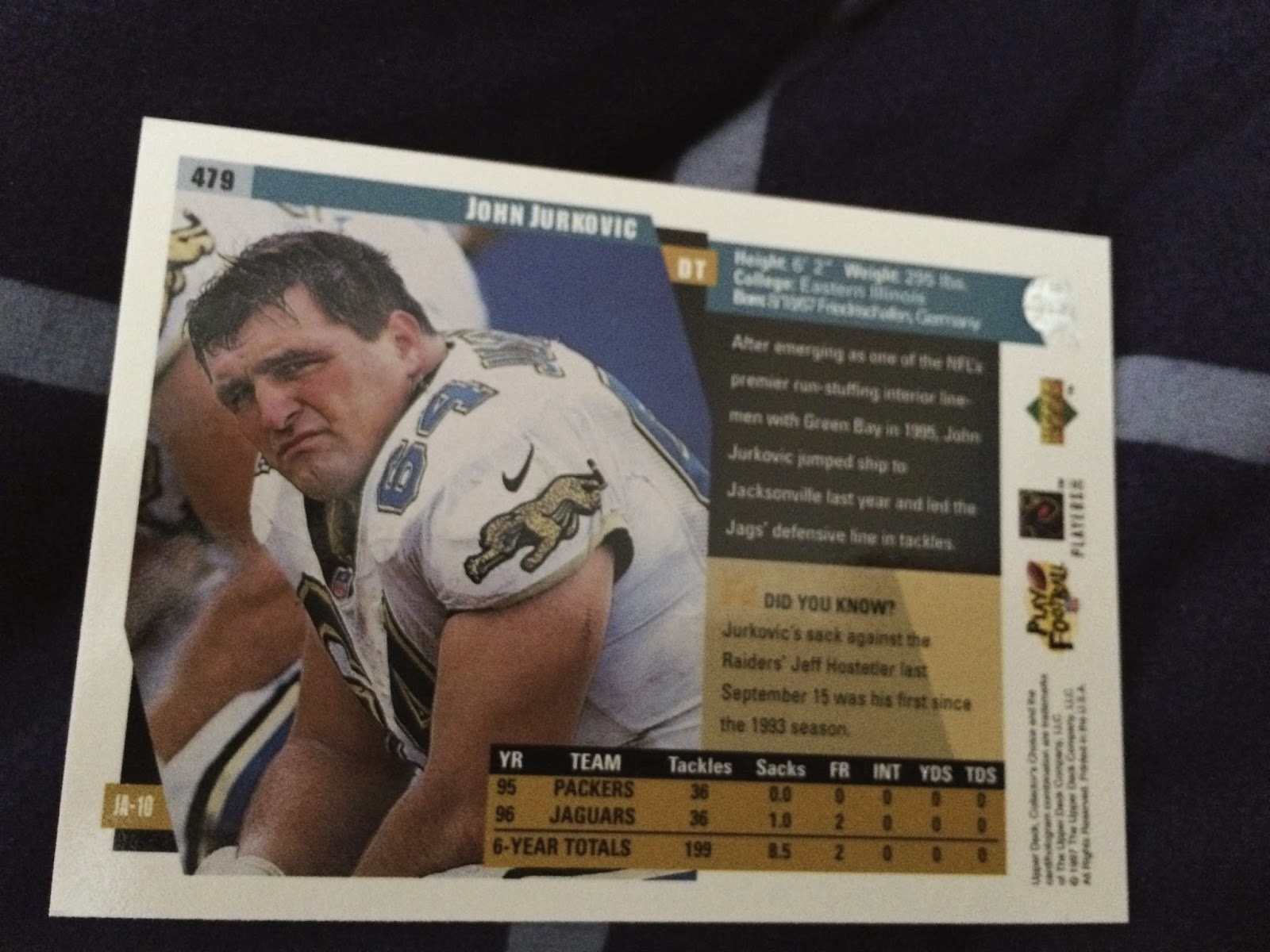 Looks like somebody's sad to be playing for the Jaguars. 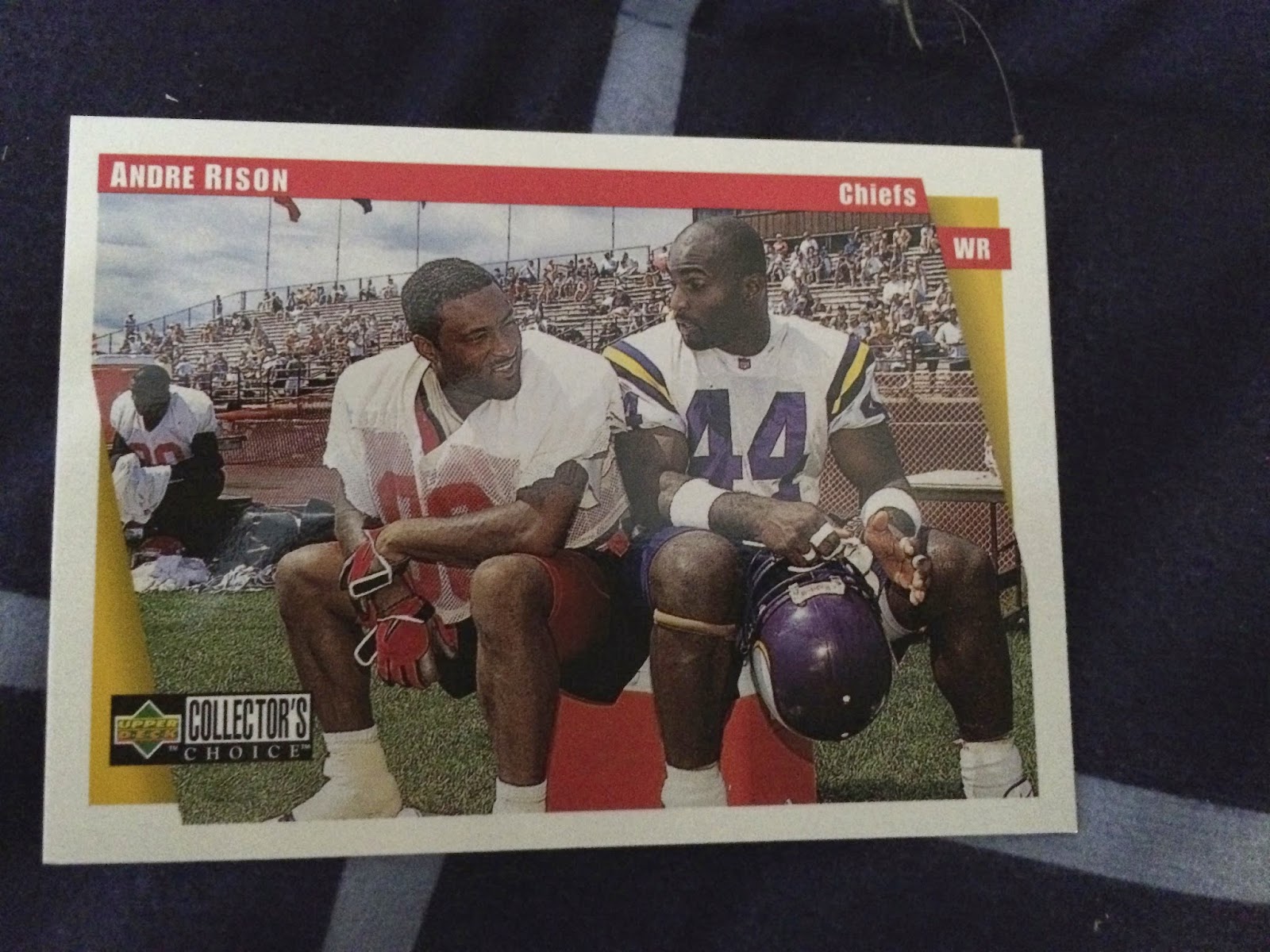 I love this shot. Andre Rison is just chilling on the sidelines, talking to Leroy Hoard of the Vikings. It's a cool, fun shot. 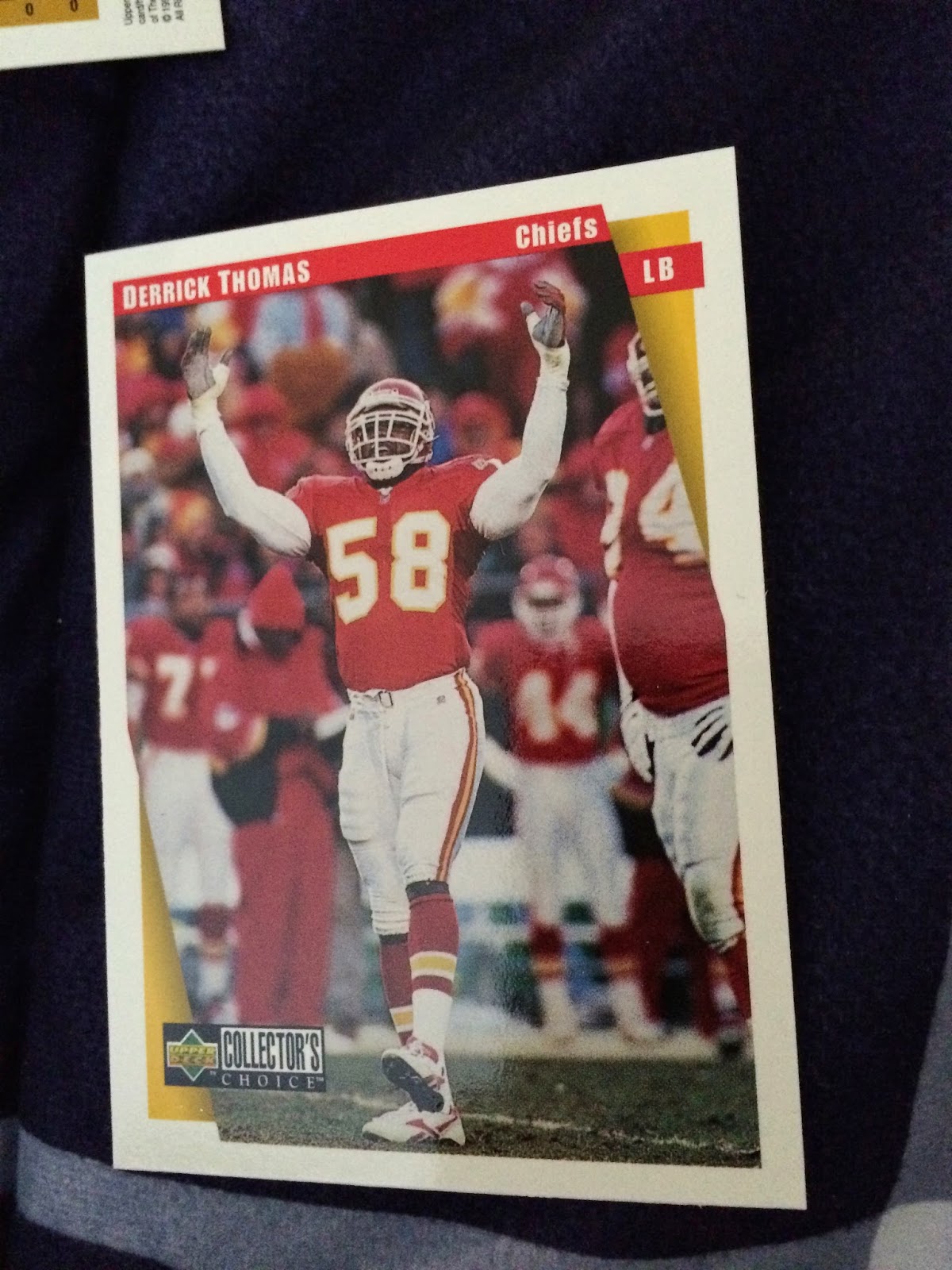 Another great shot of a Kansas City Chief, this one of Derrick Thomas, victoriously running around. 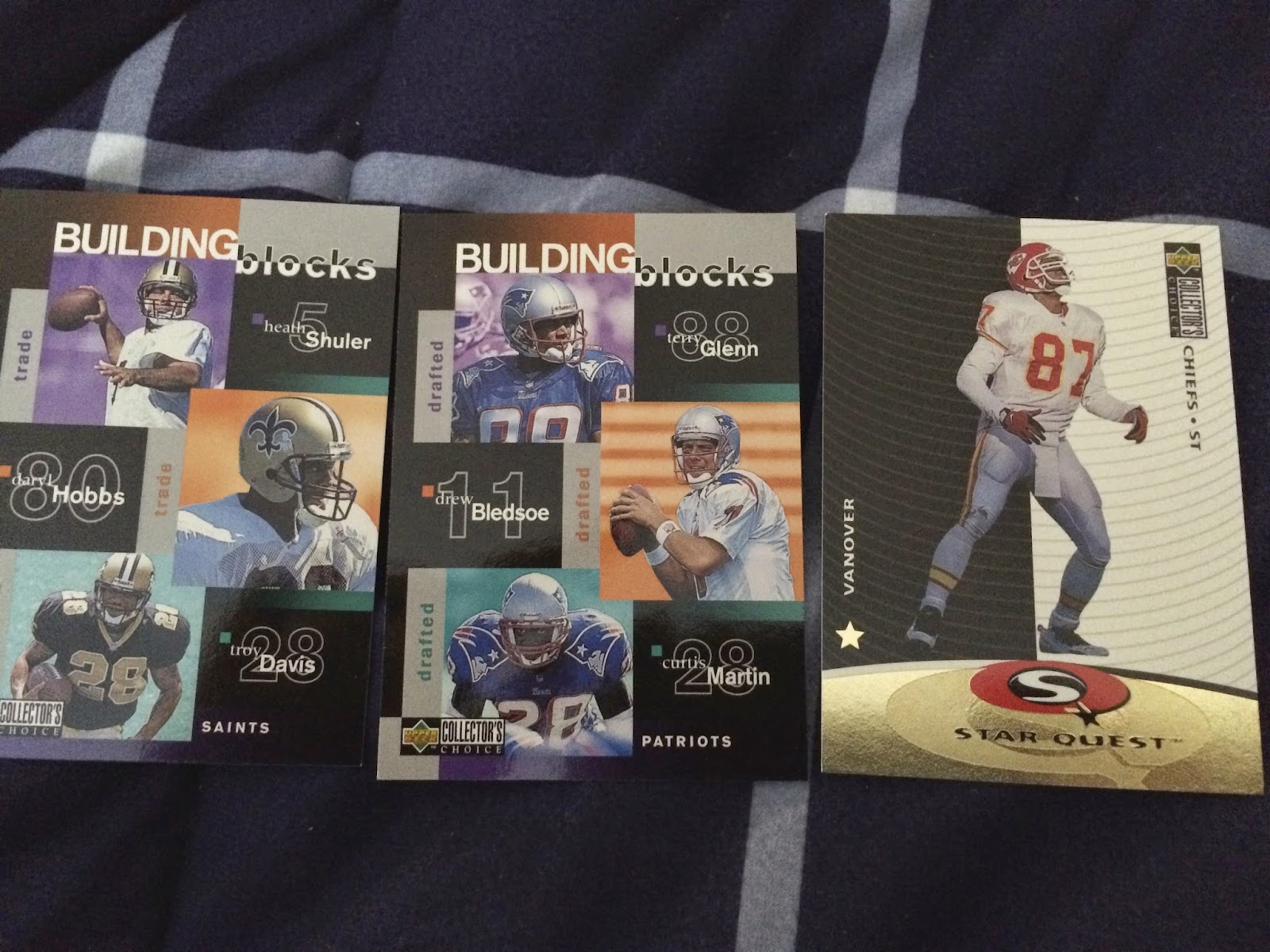 Insert time. A couple more Building Blocks inserts, remaining the world that Heath Shuler once was a Saint, and the Patriots used to lose games. Also, one of the strangest StarQuest inserts, of Tamarick Vanover, who wasn't really too relevant in 1996. The dude's a special teams guy. Not sure that he deserved a hyper-cool insert. Still, great topper to a Chiefs hot-pack. 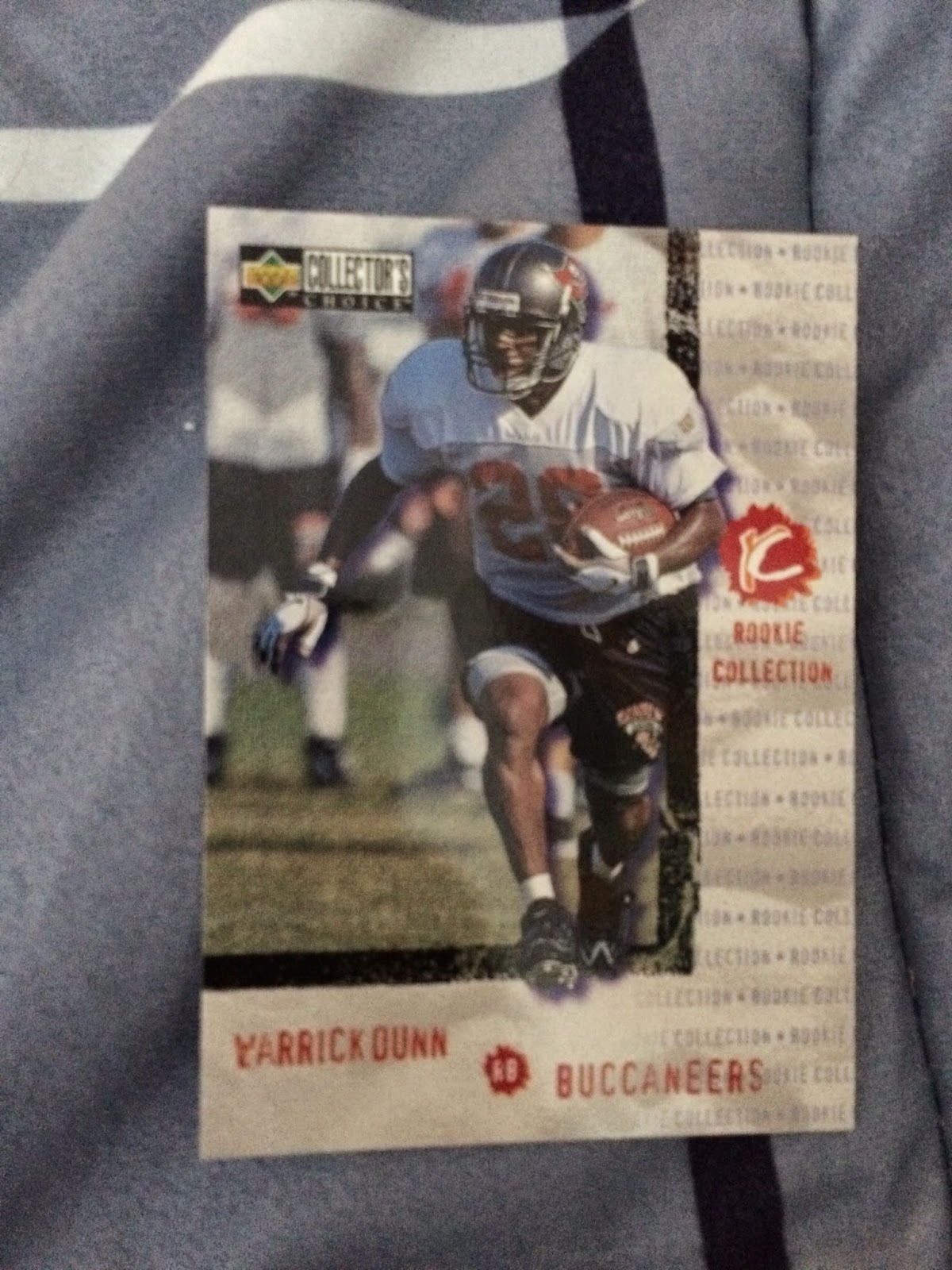 Luckily our rookie is of someone I've heard of, multiple pro-bowler Warrick Dunn. I'll accept the fact that he's not flying or anything, like most of the other Rookie Collection inserts. 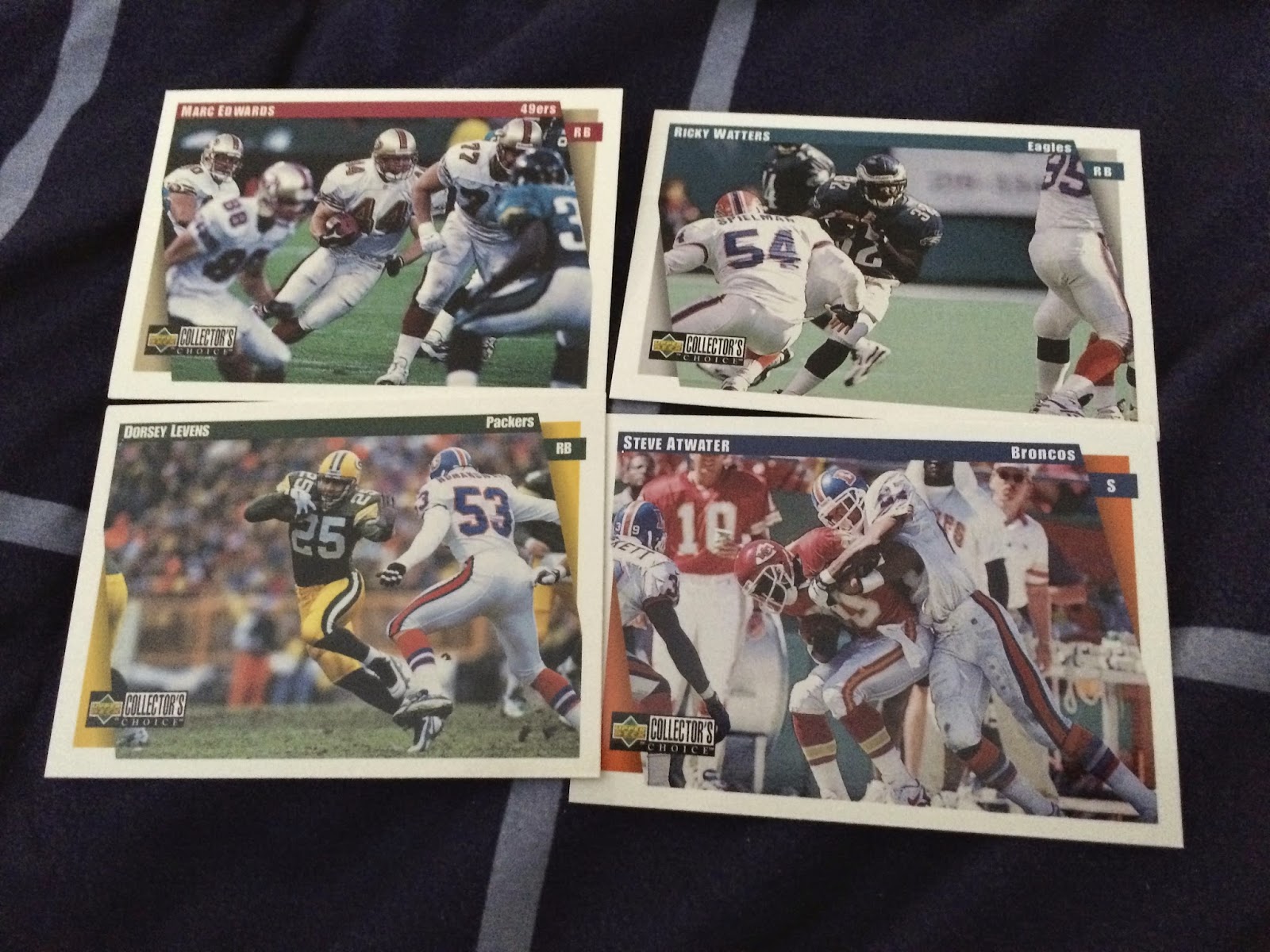 Pack 7- More sideways shots. Ricky Watters is the standout here, as the Eagles rule, but Marc Edwards, Dorsey Levens and Steve Atwater are also present and accounted for. Atwater's a nice one too, as he'll likely be a HOF finalist until the end of time. 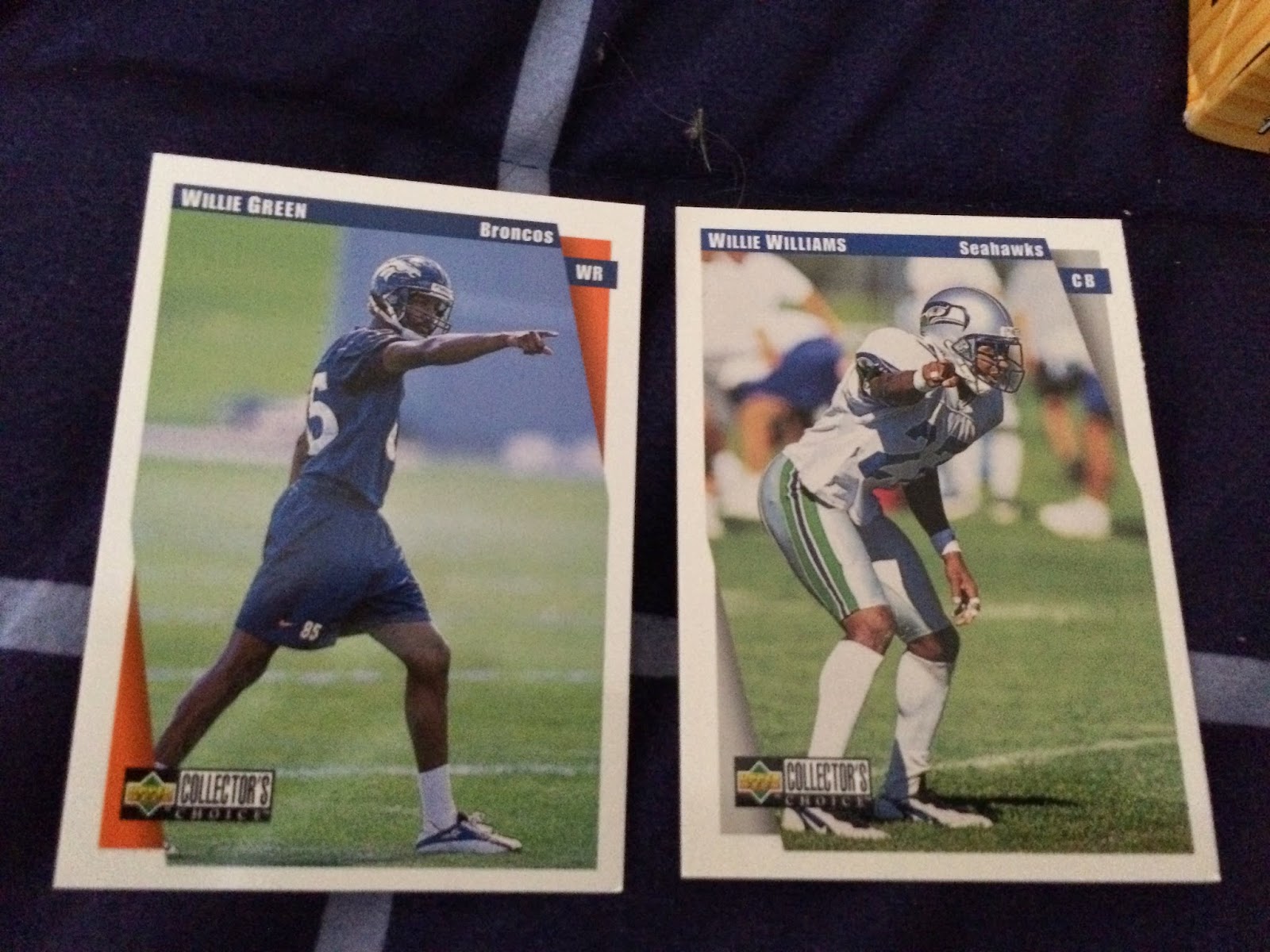 Could not have planned this better- Two Pointing Willies. 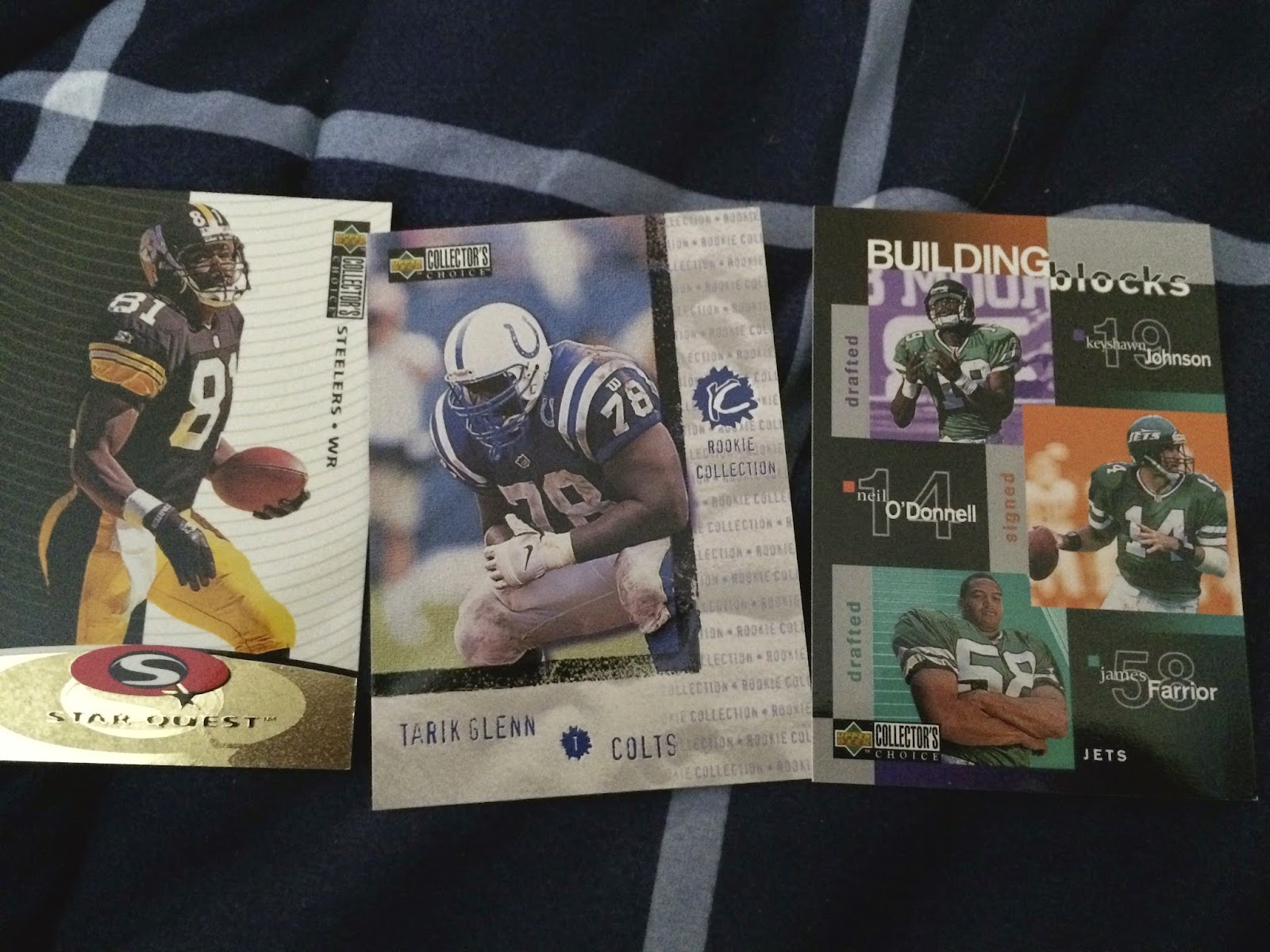 A trio of inserts. Charles Johnson of the Steelers is our StarQuest, and Tarik Glenn, who was a pretty nice defensive piece for Indianapolis, is out Rookie. Also, there's a Building Blocks insert for the Jets. 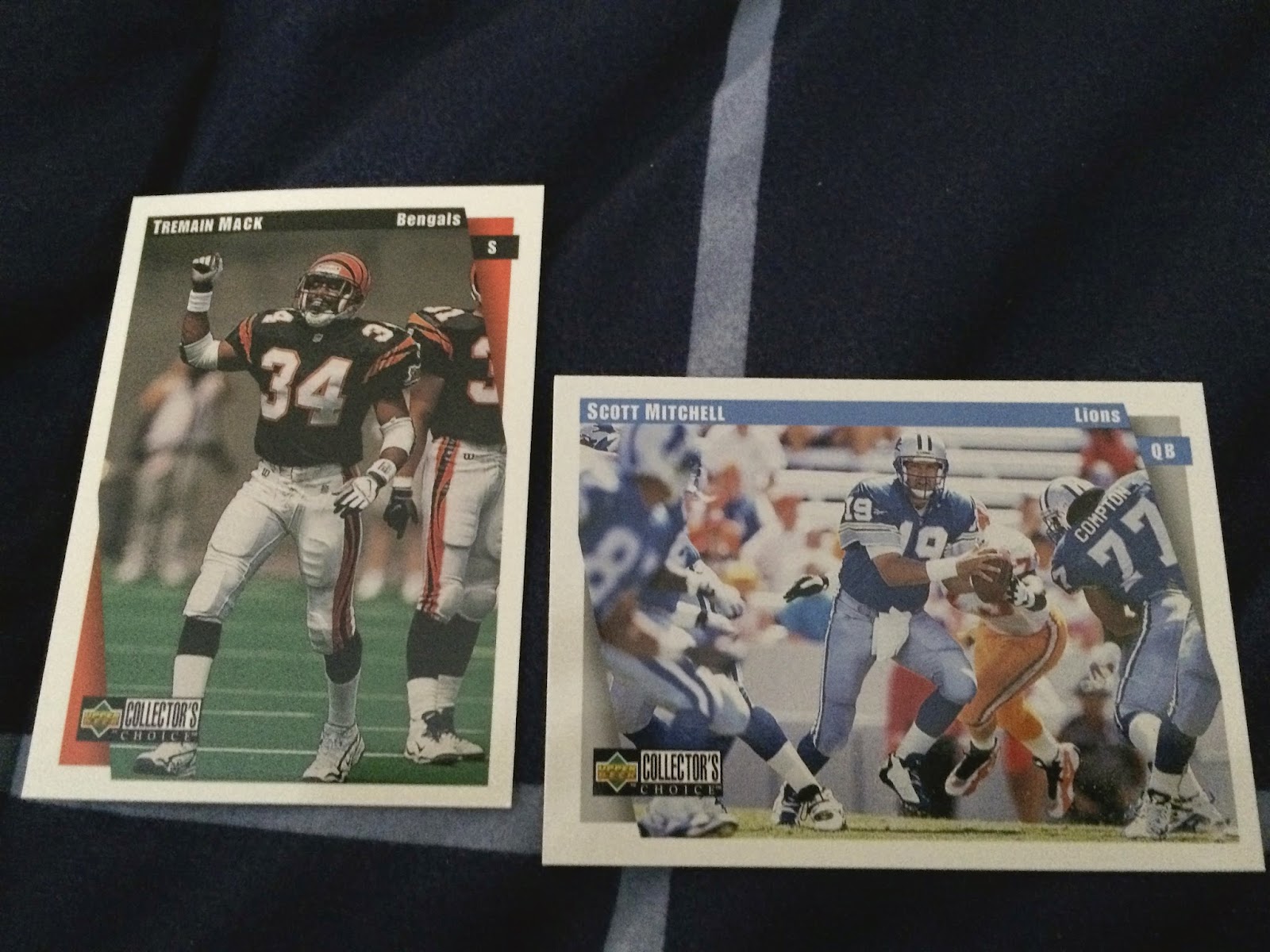 Pack 8- Some photo highlights, including Tremain Mack and Scott Mitchell 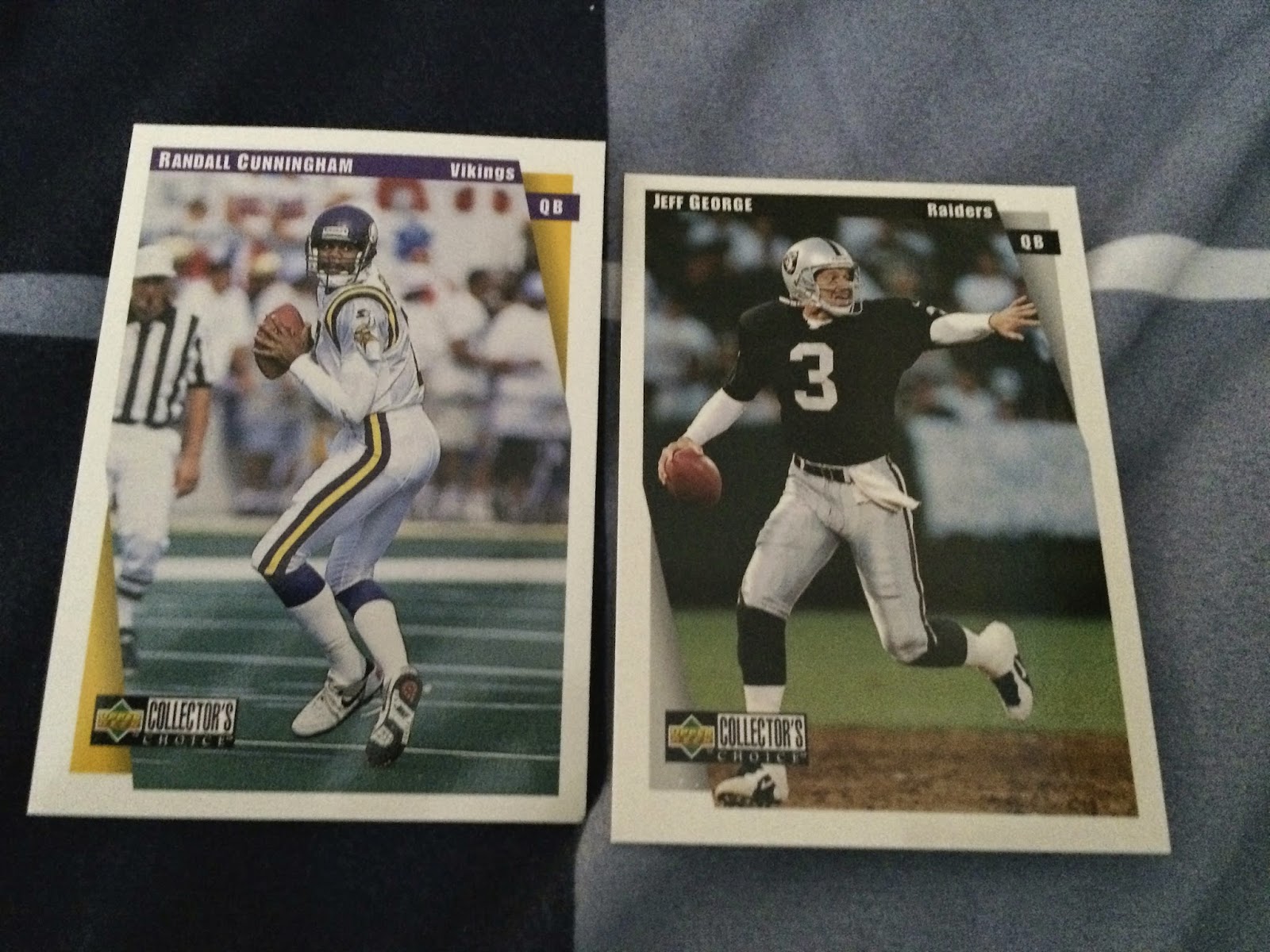 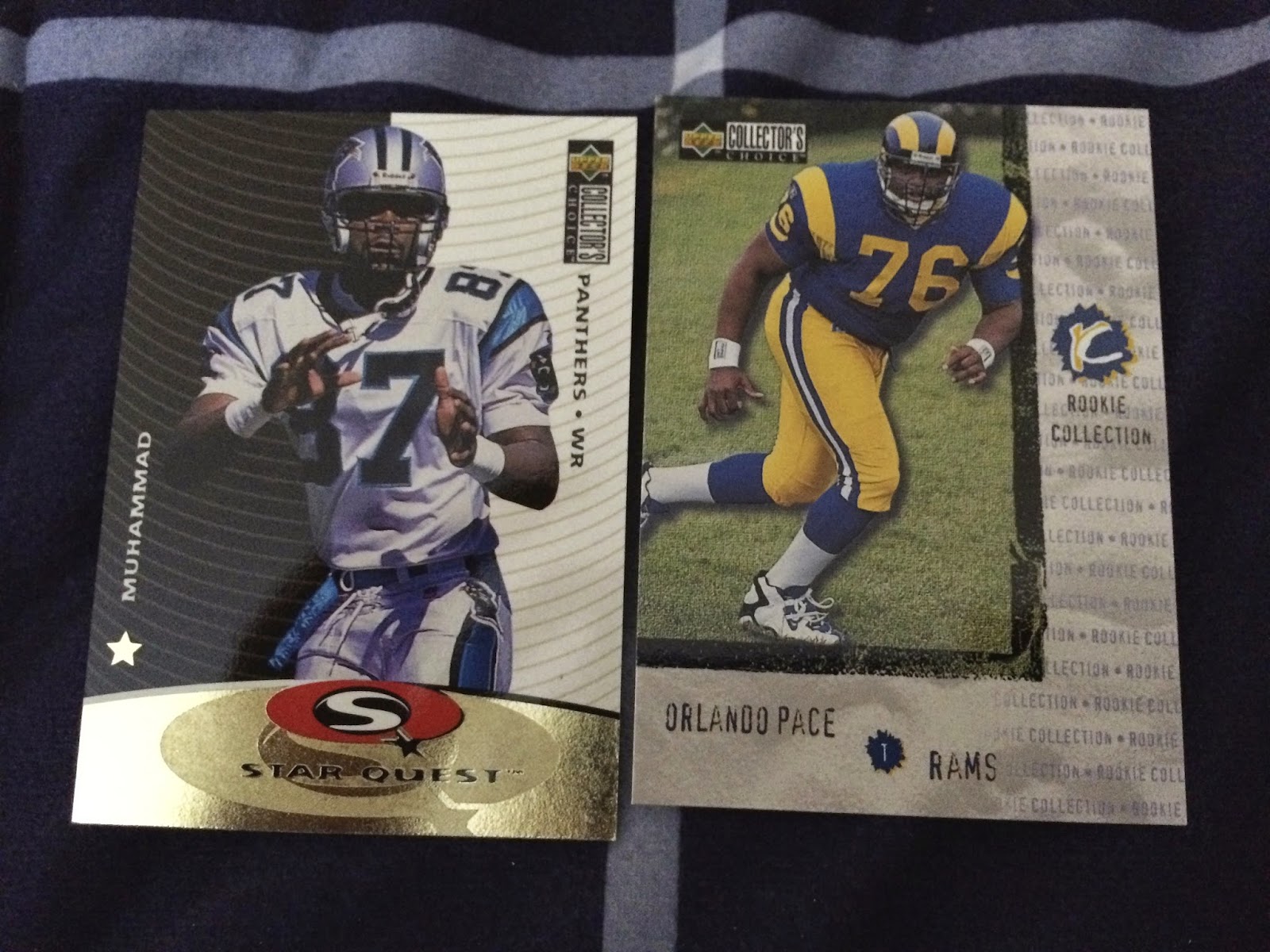 Here are some okay inserts. Our StarQuest is of Mushin Muhammad, and our Rookie Collection is of Orlando Pace. Both players did pretty well, albeit not as well as others, but they had some nice seasons.

What's that? you want better inserts? 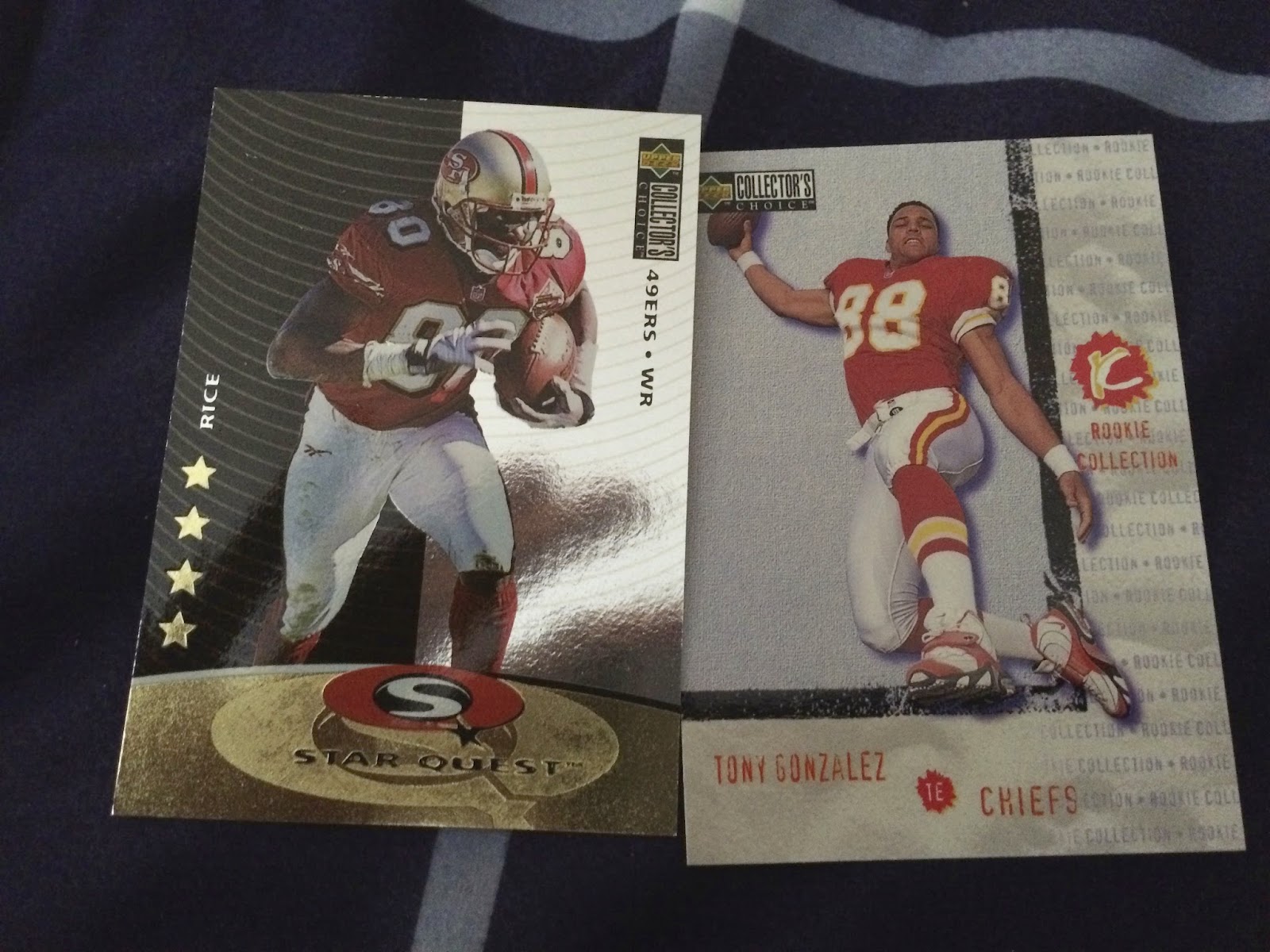 Here are inserts of two Hall of Famers. The StarQuest is a FOUR STAR one of Jerry Rice, which is awesome. Our Rookie Collection is a really nice airborne photo of TONY GONZALEZ. So...two really awesome players, one of which is in the HOF, one of which will be eventually. Those are some amazing inserts. 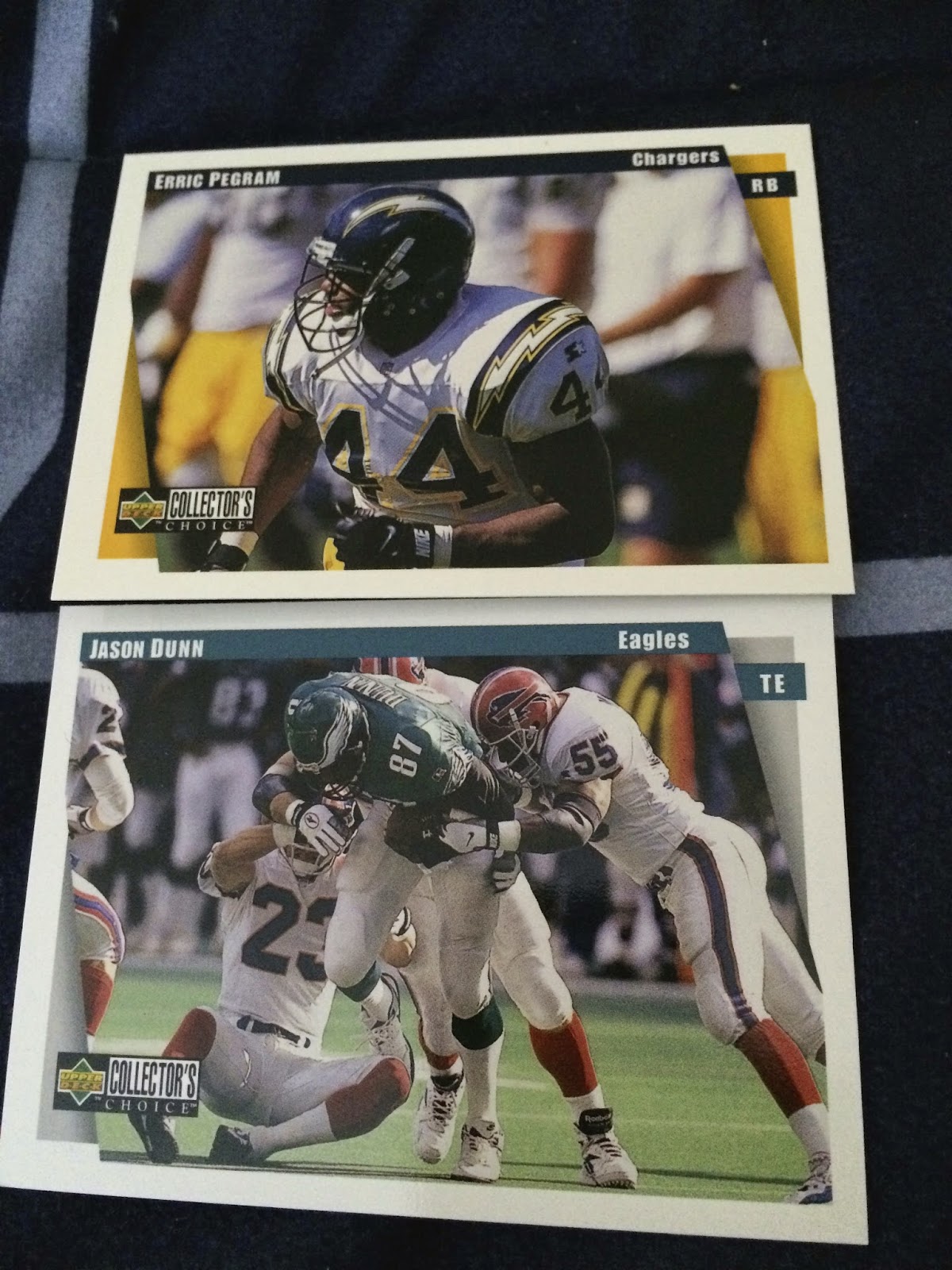 Pack 9- Two nice sideways shots lead off the pack. One of them is of a Philadelphia Eagle getting ambushed by some Bills. Kind of sums up their defeat this season. 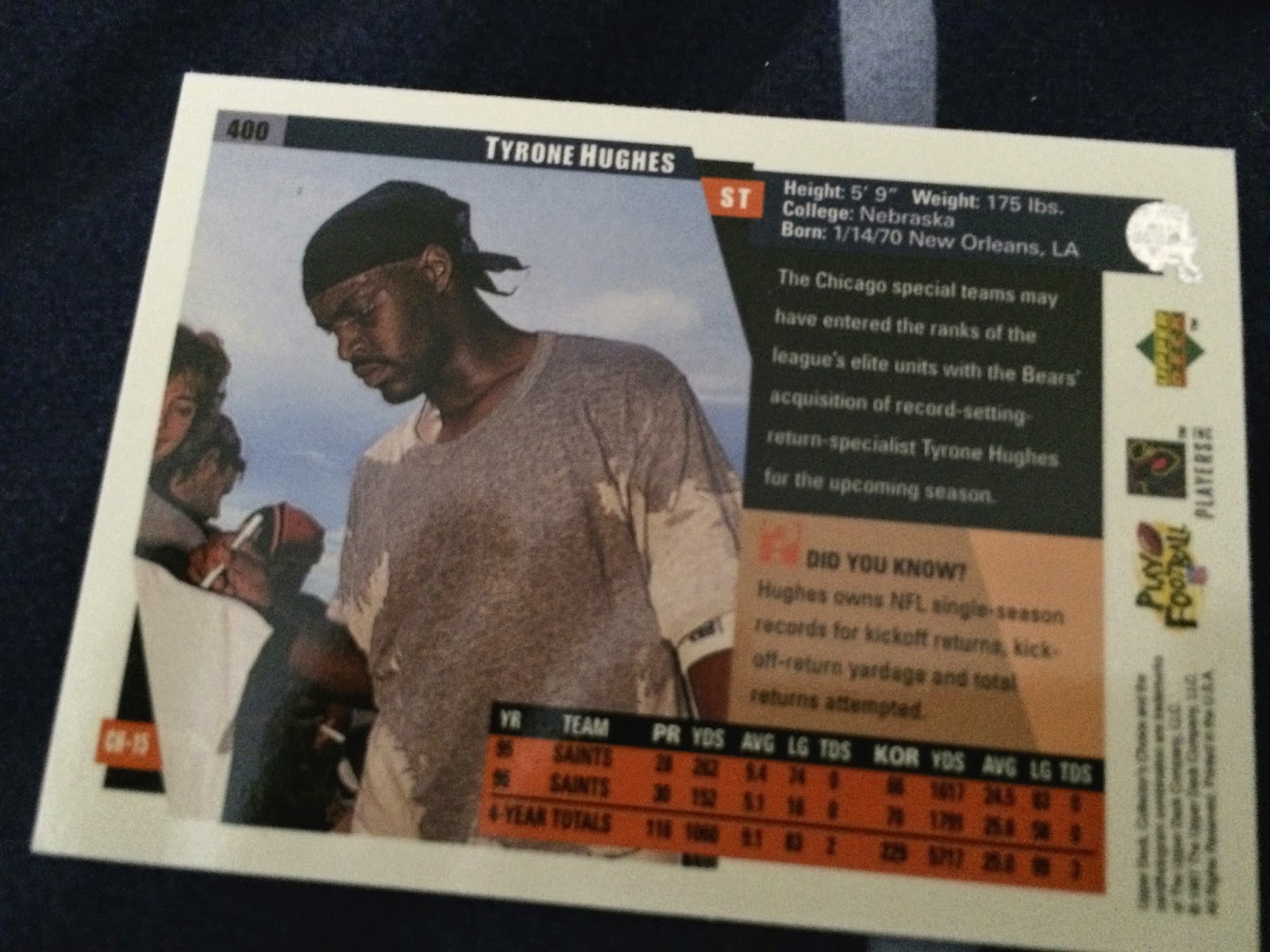 Here, a sweaty Tyrone Hughes signs some autographs during training camp. I'm glad Collector's Choice had so many photos from Training Camp. 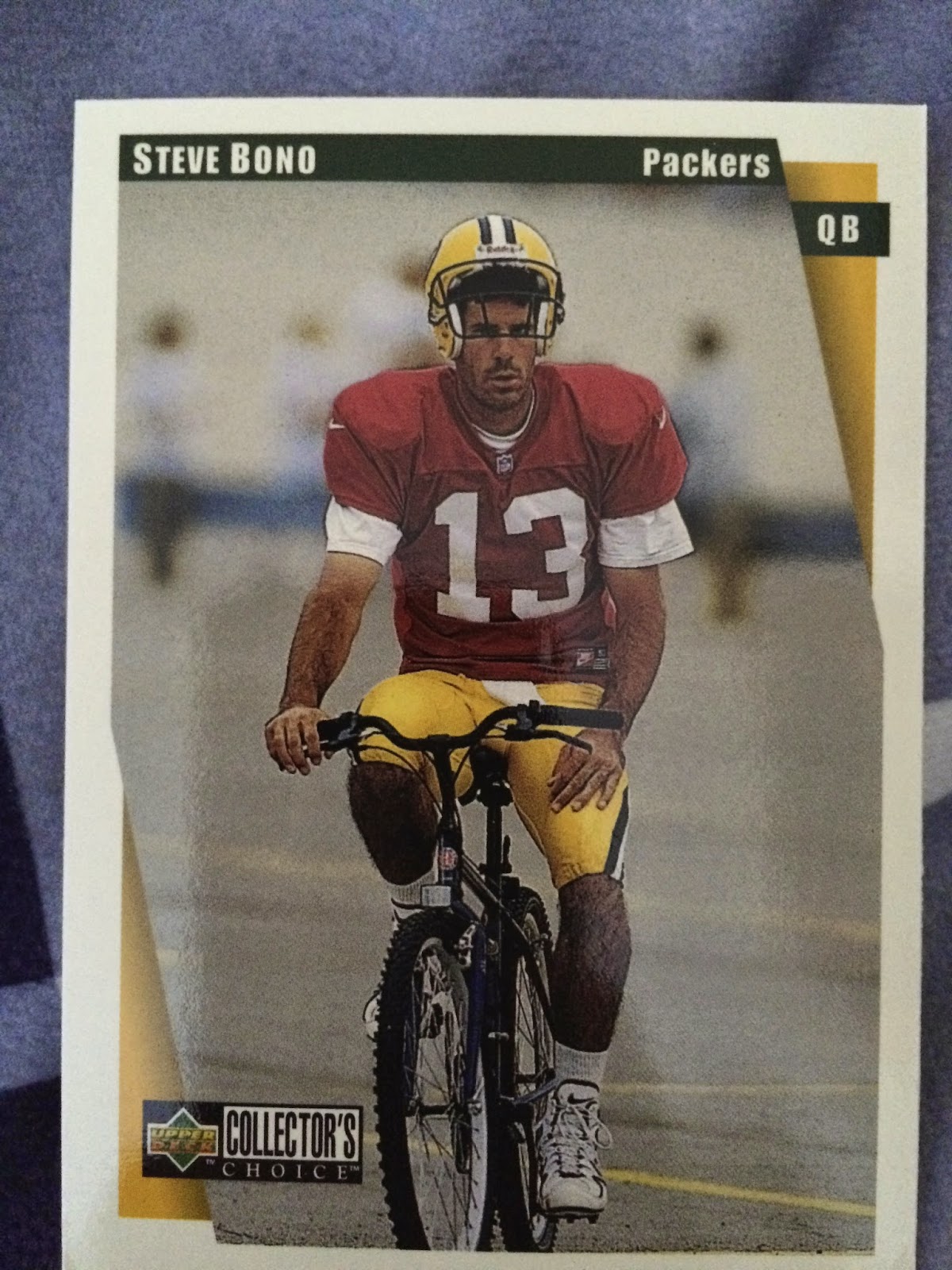 So this is my favorite card I've pulled in a while.

Not because of the subject, but because it represents a time-honored Green Bay tradition. My dad told me that during training camp, kids on bikes wait around for players and offer to help them carry equipment. So here, Backup-QB #1000 Steve Bono takes a ride on a bike to practice. This is awesome. 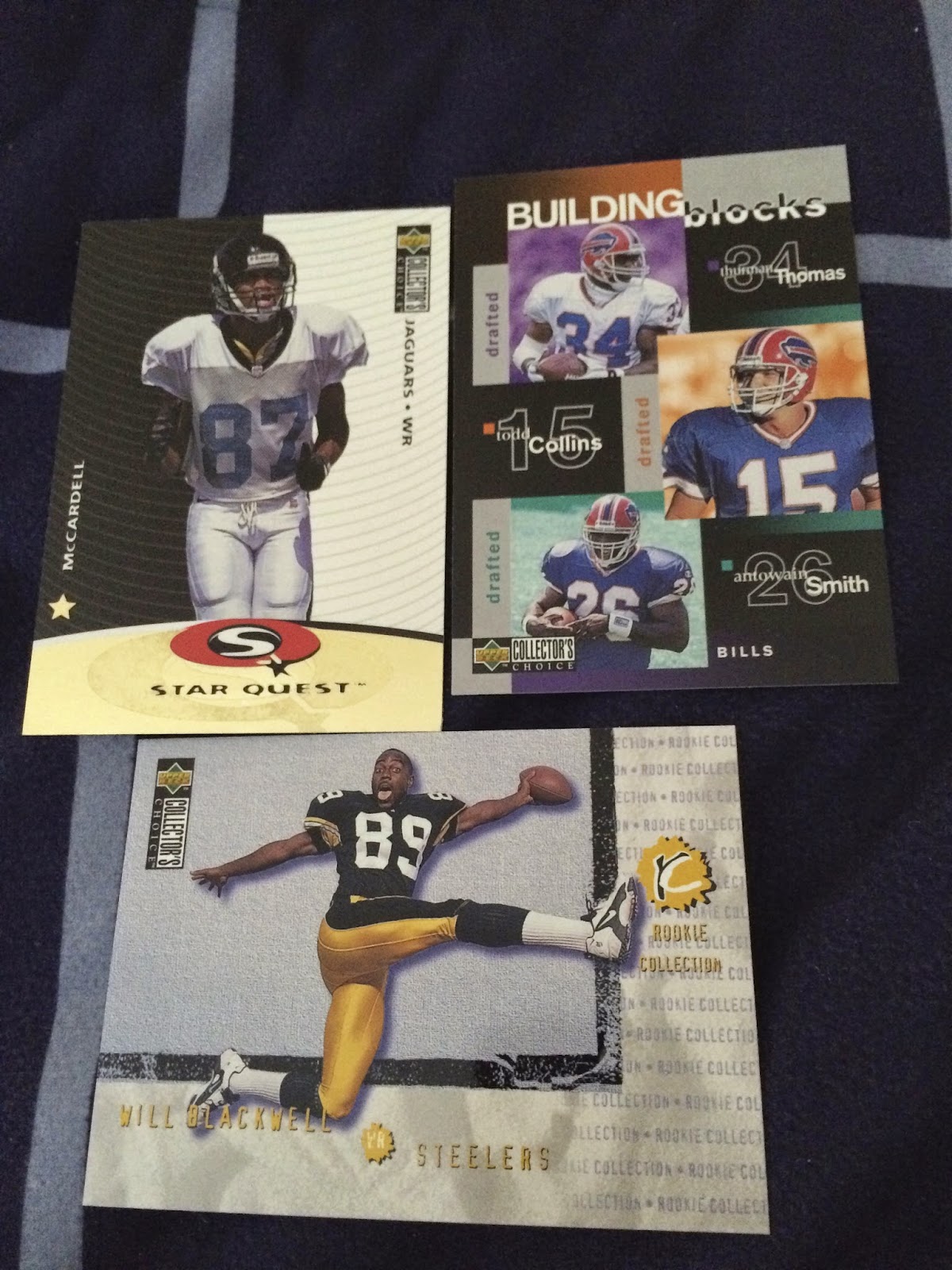 And here are our inserts. Keenan McCardell is our StarQuest, coming off of a Pro Bowl season with the jaguars. Building Bolcks insert is of the Bills, where only one of those three players is actually relevant. At least Will Blackwell is jumping for joy here; he was basically a bust. 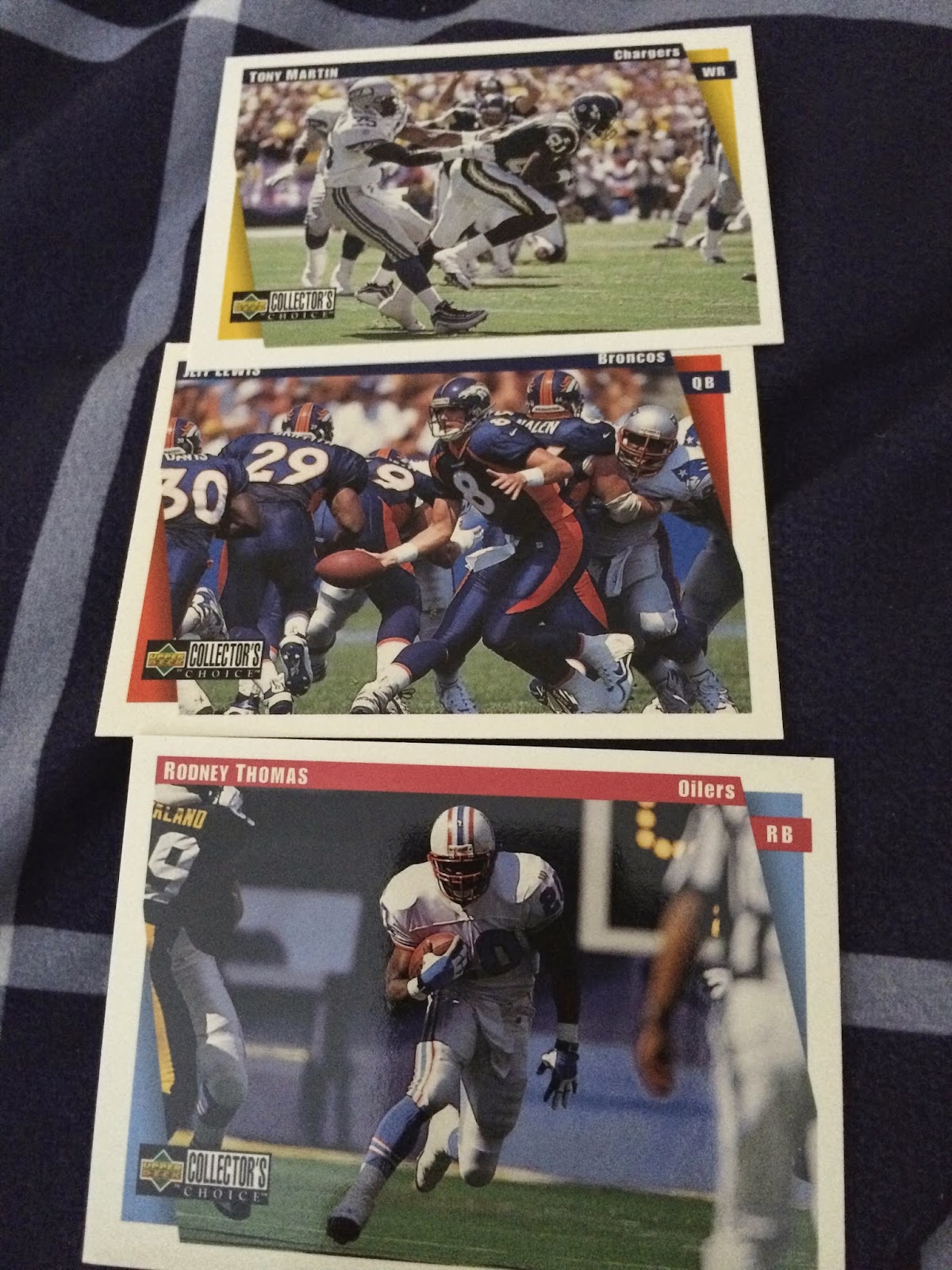 Pack 10- Again, you really have to appreciate the wide shots they use in this set. Not a lot of the generic running stuff that Topps uses nowadays. 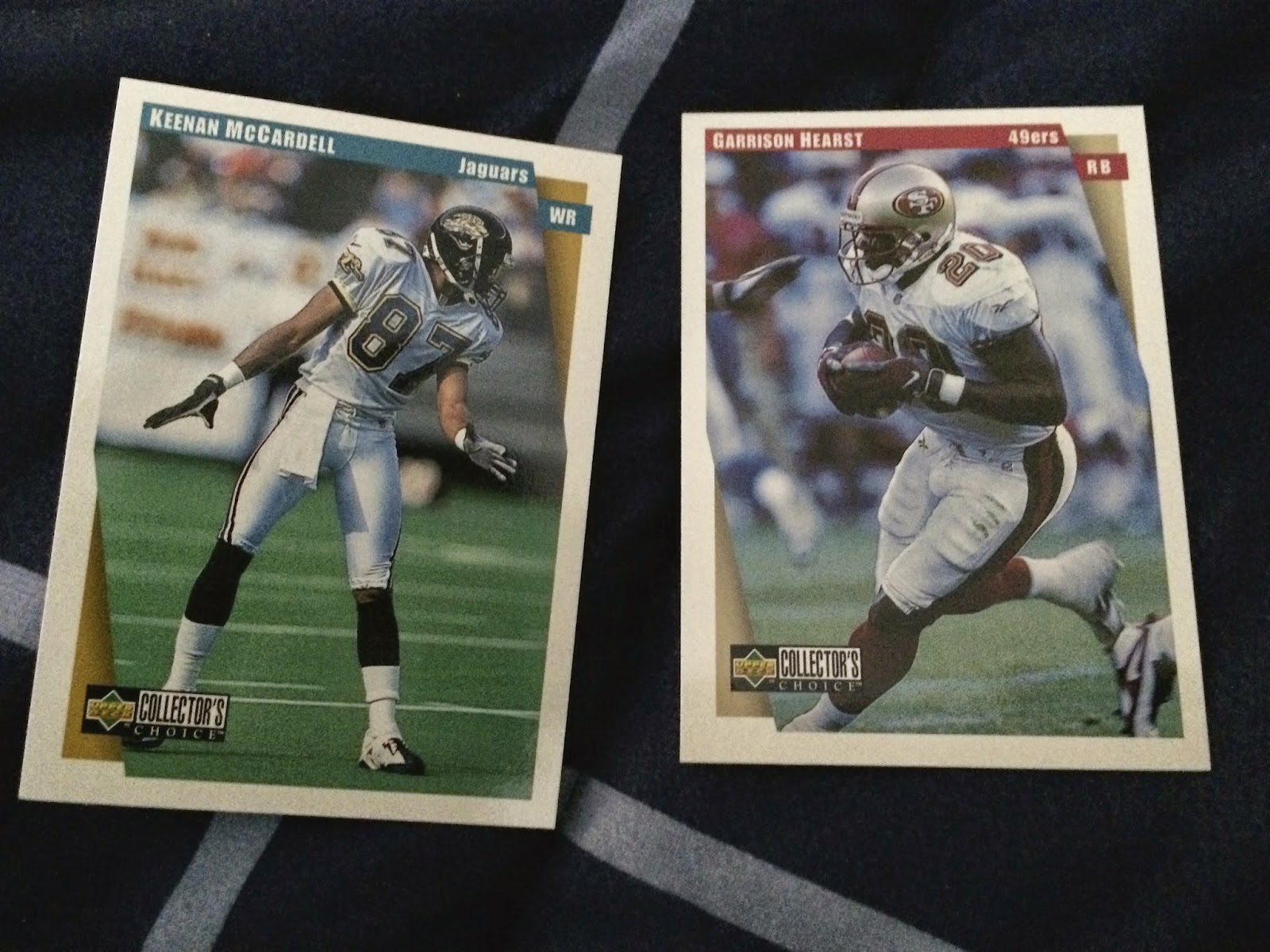 Here's Keenan McCardell, who we were literally just talking about. Next to him is solid 49ers RB Garrison Hearst. 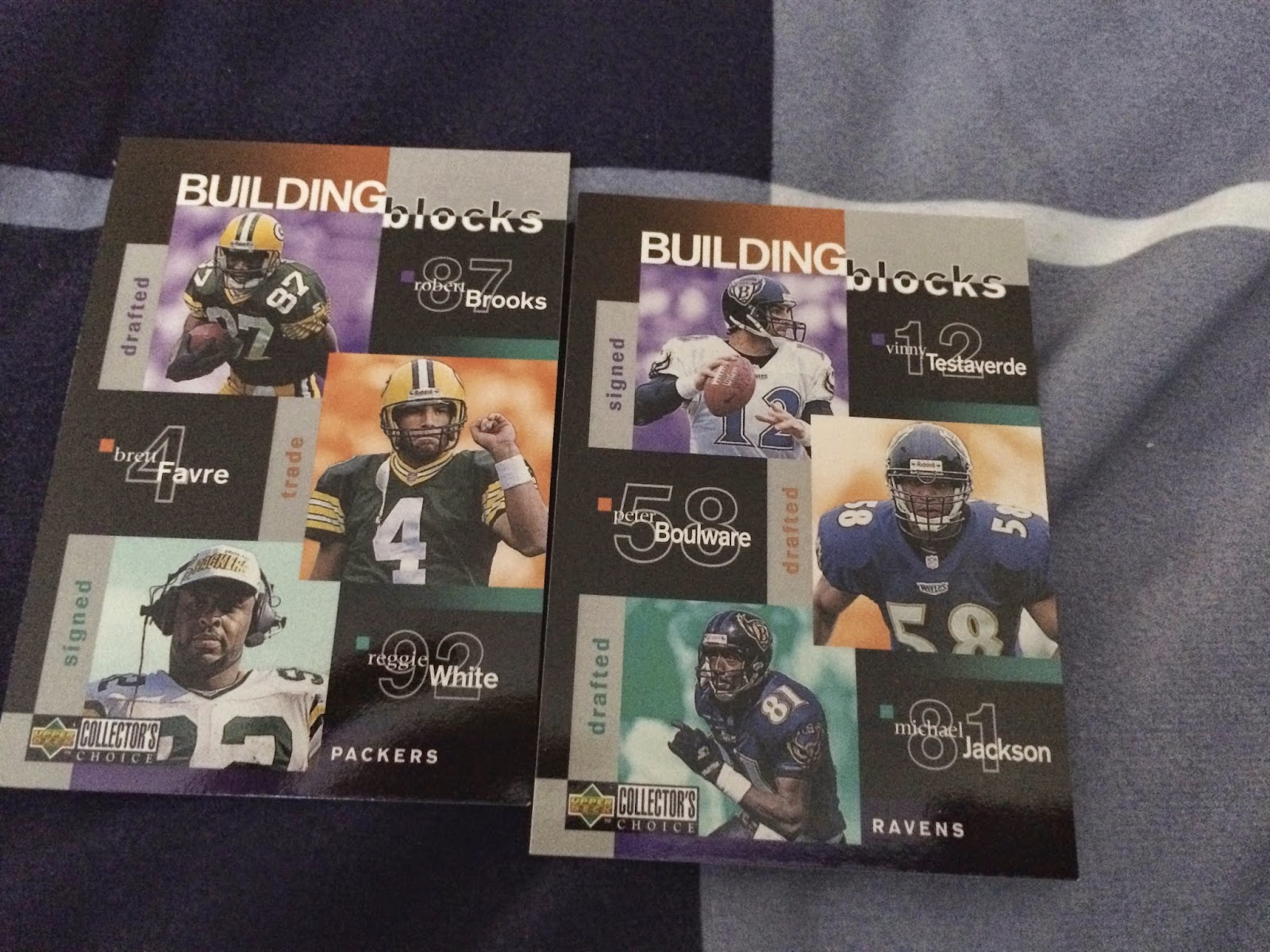 Once again, they gave us two Building Blocks inserts, but these two are of teams that would be winning a Super Bowl ring this decade. Plus, Favre and Testaverde stuck in the league for about the same amount of time. 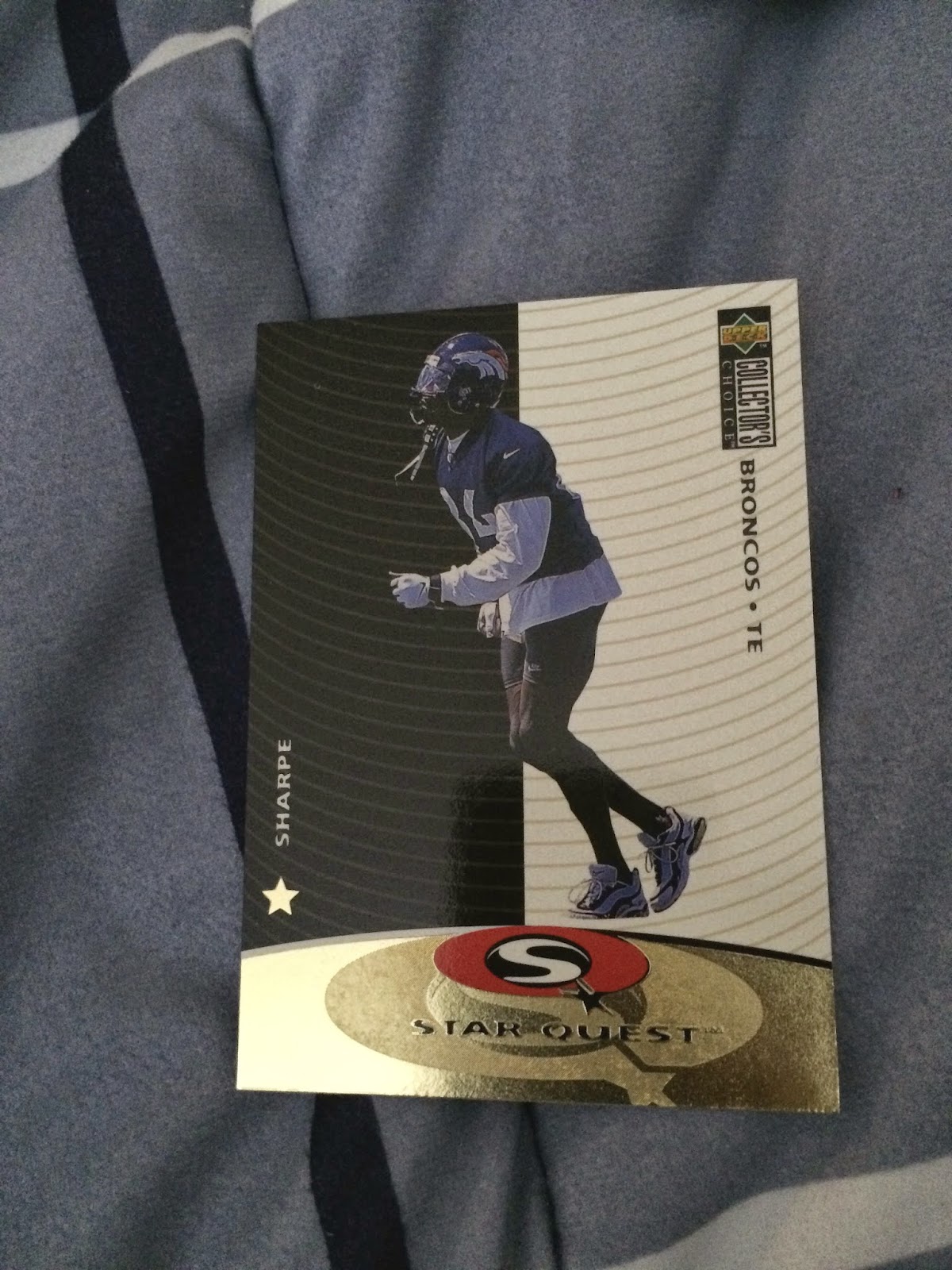 Our StarQuest insert is of Hall of Famer Shannon Sharpe, master of the lips.

I'll probably post some more of this box eventually.
Posted by Jordan at 2:58 PM