Topps Cards That Should Have Been: 2010 Jim Edmonds 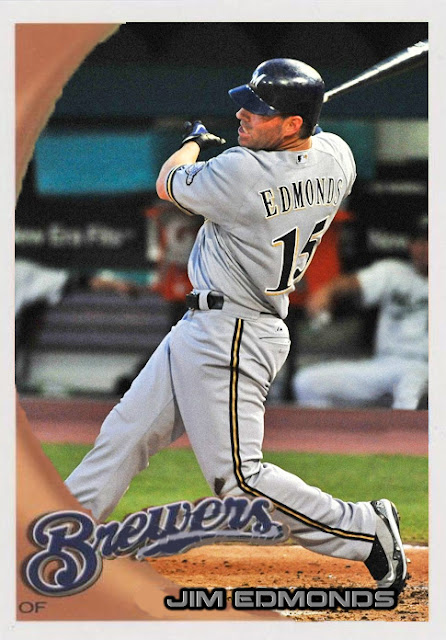 However, the years beyond that mark weren't as satisfying. After a down year in St. Louis in 2007, Edmonds was traded to San Diego for a fresh-eyed third base prospect named David Freese. Edmonds had a solid season in 2008, despite a rough go at things for the Padres- he signed with the Cubs and was a huge player in their postseason attempt that year, hitting .256 with 19 homers in 85 games.

In 2009, Edmonds apparently didn't get any good offers to play, so he sat the season out. But, in 2010, he got a good one from Milwaukee, another NL Central team. They needed help in the outfield in case Braun got injured, and Edmonds responded with his best season since 2005- a 2.0 WAR, a .286 average and 62 hits in 72 games. Not bad for a 40-year-old who came up with the Angels back when they were still called the California Angels.

Of course, the Brewers weren't going anywhere in 2010, but the Reds were, and they traded utility outfielder Chris Dickerson to Milwaukee to get Jim Edmonds' 2010 season. Edmonds hit .207 in 13 games with the Reds. ADV- Brewers.

Topps put out a card of Edmonds in Update of his Reds tenure, which means the better season and uniform for Edmonds never got produced by Topps. Which is too bad, as it's a solid last season for the Cardinals hero and the hard-hitting outfielder. Like the rest of his career, it should be kept in better regard.

Labels: 2010, Brewers, Jim Edmonds, Topps Cards That Should Have Been