Topps Cards That Should Have Been: The Salomon Torres Chronicles 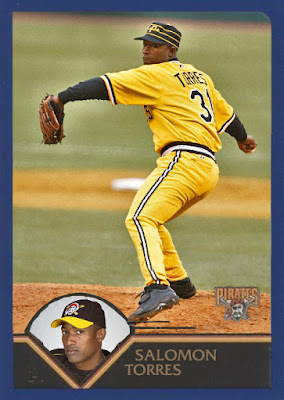 More with Topps' vendetta against relievers.
From 2002 until 2008, Salomon Torres was one of the most consistent relievers in the NL Central, averaged a 3.61 ERA with 381 strikeouts and 57 saves, and was a middle relief rock for a market that was anything but consistent.
However, you probably never knew that for five of those years because A.) Torres was a middle reliever and B.) Torres played for the Pittsburgh Pirates.
Topps would mostly shrug through issuing Pirates cards every year of their mediocrity in the mid-2000s. A lot of Pirates that'd show up in Topps sets in this period were educated guesses. Sure, maybe this veteran will have a good season there, maybe this rookie. Meanwhile, people like Nate McLouth and Ryan Doumit didn't get cards as Pirates until they were about to be traded, essentially. And people who deserved them, like Salomon Torres, got none in flagship.
Heck, pulling a card of Torres' in 2004 Total was how I learned he'd hung on as a Pirate to begin with. I knew Torres from being a high-profile rookie in the mid-90s, making the cover of 1994 Stadium Club Series 3, and being a highly-touted Dominican prospect that didn't pan out in SF. So he bopped around the leagues, sat out for 3 years, had a comeback in Korea and starting in 2002 was a mainstay in the Pirates bullpen.
2003 was the first Torres year I could get images from. This season Torres was still being partially utilized as a starter but eventually moved to the bullpen, where his ERA would even out to 3.20 in 25 appearances. From here, the Bucs knew what to do with Salomon Torres. 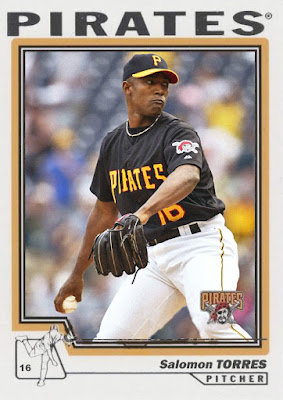 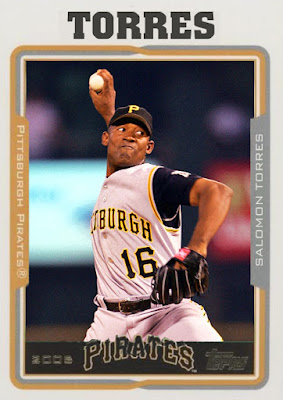 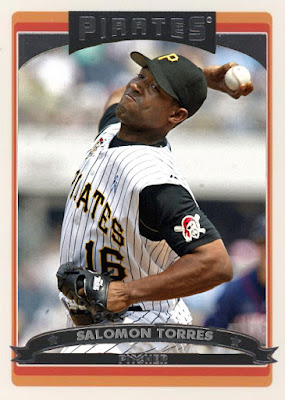 In 2006 Torres pitches in a league-high 94 games, and gets a 3.28 ERA with 72 strikeouts. The league is recognizing Torres' versatility and consistency, even if Topps won't. 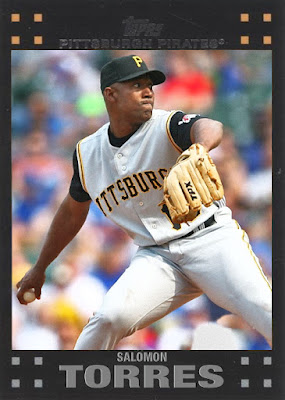 And in 2007, Torres powers down a bit with a 5.47 ERA in 56 games. Though in the past two seasons he's accumulated 24 saves, he's still a middle reliever and his 2007 struggles seem to point to the end of his era in Pittsburgh.
After the 2007 season, he's traded to Milwaukee for a pair of prospects. Milwaukee rewards Torres by giving him the closing gig and letting him save 28 games with a 3.49 ERA. Topps rewards Torres by finally, FINALLY including a base card of his in Update. I think it's very telling that they waited until he joined a team that was A.) playoff-contending and B.) not the Pirates in order to do this, but thankfully they gave him the final sendoff he needed.
Posted by Jordan at 5:52 PM