Topps Cards That Should Have Been: The Quinton McCracken Chronicles 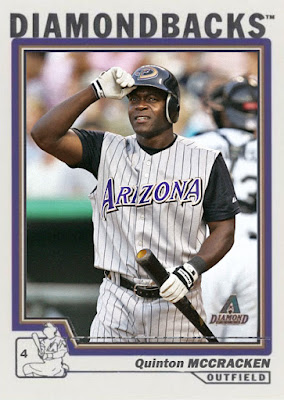 Quinton McCracken was one of those guys that just lived to play for expansion teams. He was drafted by the Rockies, was an Opening Day member of the Devil Rays, and was a fan-favorite member of the early-2000s Diamondbacks teams. We're one Marlins signing away from a full 90s expansion bingo card, though that never happened.
McCracken was one of those high-steals low-offensive-production guys that Topps never knew what to do with. In 2004, he got a card as a member of the Seattle Mariners, a badly photoshopped-background card at that. While he did play a good portion of the 2004 season with the Ms, he was released in June, and promptly re-signed with the team he'd just been traded from to begin with, the Arizona Diamondbacks. So he proceeded to spend two more years as a bench bat there.
In 55 games with the D-Backs in '04, he hit .288 with 45 hits and 13 RBIs. Most of all, he was home, and it felt good to be home. 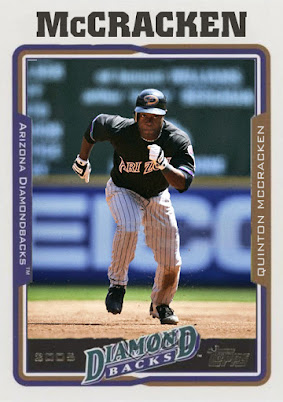 The same concept continued in 2005. He played in 134 games, first off the bench and eventually as a full time center-fielder as a replacement for Jose Cruz. He hit .237 with 51 hits and 13 RBIs. It was a last hurrah of sorts for McCracken. He was 34, things were winding down, and it wasn't looking like the D-Backs would re-sign, so he was just enjoying himself. 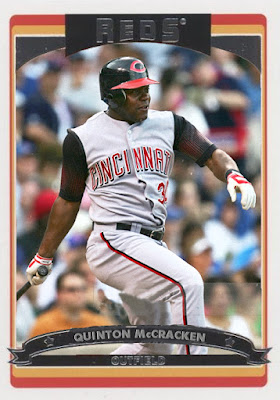 In 2006, he gets signed to a one-year deal with the Reds, which...is odd. Those 00's Reds vests on an expansion hero are...weird to me. Anyway. Mostly a bench guy that year, McCracken hit .208 with 11 hits in 45 games. The Twins would sign him at the tail end of the 2006 season but he wouldn't play at all. Thus ending his career.
Fun little player. Probably one of the best known MLB players whose name starts with Q.
Posted by Jordan at 2:49 PM