Topps Cards That Should Have Been: The Chien-Ming Wang Chronicles 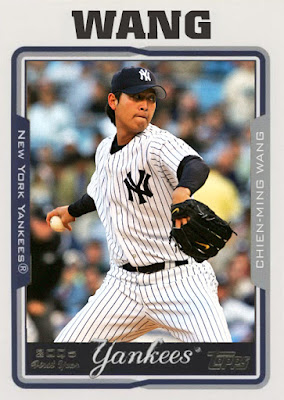 The Yankees clearly have trouble with sustaining international success outside of their club.
Like, they book an international contract, it works really well for them, and then...the player doesn't really have much of a career after being with the Yankees. It happens nearly every time. It happened with Hideki Irabu, it happened with Hideki Matsui, it...okay, it backfired entirely with Kei Igawa. And now it's happening again with Masahiro Tanaka, as he'd rather go back to the Rakuten Eagles than play the waiting game with a bunch of MLB clubs that won't pay him what he's worth.
Perhaps the biggest example of this is, well, Taiwan's greatest gift to baseball, Chien-Ming Wang. I'll mention once again that my dentist, who came over here from Taiwan, always used to talk to me about Chien-Ming Wang. They loved him over there, and they followed his MLB career wholeheartedly in a way not exactly translated for other Taiwanese exports like Hong-Chih Kuo and Wei-Yin Chen. So I became a Wang fan not just because of his monster run from 2006 until 2008, but because my dentist's entire country was behind him. I loved that.
Wang has a rookie card in 2003 Topps, but they wouldn't document his actual playing career until 2006, which means his 2005 call-up, where he went 8-5 with 47 Ks in 18 games, was ignored by Topps.
That's the intriguing thing about Wang that made him such a unicorn in this era of baseball, where strikeout artists were becoming more and more rewarded- he didn't rely so much on strikeouts as he did mental games and making them hit it exactly where he wanted to. Wang was the master of the slider, and his slider was nasty enough to make him a lethal put-out pitcher even if he'd only get between 75 and 100 strikeouts in his two best seasons.
However, Wang succumbs to some injuries during the 2008 and 2009 seasons, misses out on the World Series ring, then signs with the Nationals, where he has some more injuries and his control diminishes further. So he bounces for his last few years in the majors.
He actually spends training camp in 2013 with the Yankees, but they don't pick him up, so he instead found work in another AL East market. 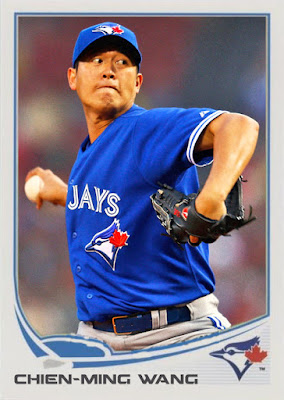 This honestly sums up what the 2013 Blue Jays season actually was. They'd teased it to be a competitive year with Josh Johnson, Mark Buehrle, R.A. Dickey and Jose Reyes now suiting up for them alongside Bautista and Encarnacion, but in all actuality it was another bottom feeder year because the 2015 team hadn't exactly arrived yet. And you had people like Chien-Ming Wang being asked for starts, and delivering a 7.67 ERA over 6 of them. Yes, he was getting playing time, but his Yankees numbers seemed far behind him. 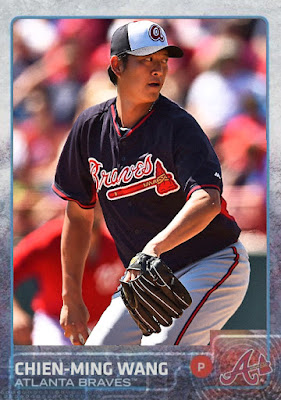 The bouncing continued. Between 2014 and 2015, Wang spent Spring Training with Cincinnati and Atlanta and didn't end up making the team, then signing with Chicago and Seattle during the season and not making the team there either. That says all you need to know when the 2015 Atlanta Braves, who've been absolutely picked clean by other teams [especially San Diego] say no-thanks to Chien-Ming Wang.
Eventually, a team would give him one last taste of the majors... 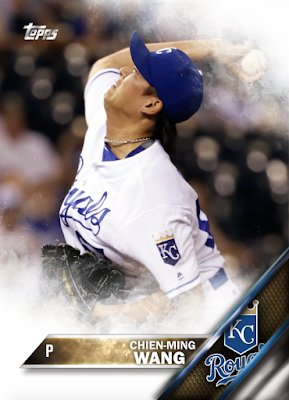 The Kansas City Royals of late have a thing about turning a once-great starter into a reliever to give them some versatility points. They did it with Mike Minor, and with Ian Kennedy, and in 2016, defending a World Series championship, they did it with Chien-Ming Wang. At 36, Wang just felt honored to be given a shot with a team in general. These numbers with the Royals would be Wang's best outside of New York- a 0.3 WAR, denoting a 4.22 ERA and 6 wins over 38 appearances, 24 of them rounding out games. It is a dignified, respectable season in relief for the Yankee hurler, and a fitting season to go out on.
Because it happened in relief and with a non-playoff team, Topps shrugged. Of course they did. Not like there were dentists watching and hoping for some semblance of respect for their hero or anything.
Posted by Jordan at 3:27 PM