Topps Cards That Should Have Been: The Jeremy Jeffress Chronicles 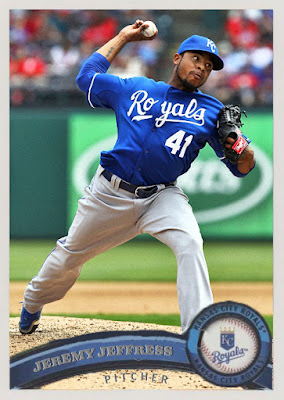 Bold statement- Jeremy Jeffress is one of the best relief pitchers of the 2010s. His epic 2020 season in Chicago was the culmination of 9 strong years of solid service across the leagues. As great as he can be, Jeffress's strengths have often gone unappreciated, especially as far as Topps is concerned. For the majority of his career, because he's 'only' a middle reliever, Jeffress will either be included in the wrong uniform or not at all in Topps' sets. The good news is that in the last few seasons he's at least been getting cards in Topps' online exclusive Total sets, but...just like the 2002-05 run, they don't count as official Topps releases to me. So, we're gonna go through every year Topps dropped the ball with Jeffress.
2011: Jeffress gets a rookie card with the Brewers for his late-season debut in 2010. In all actuality, Jeffress is already in Kansas City by the time the set is released, having been traded for Zack Greinke. In 14 games for KC, he has a 4.70 ERA and 13 Ks in relief. It's enough to get him a Topps card in 2012, but because his 2012 use is minimal, Topps...gives up for a few years. 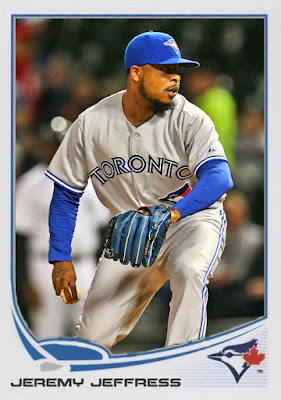 2013, the Jays purchase his contract from the Royals. This is as part of the reformed, bulked-up 2013 Blue Jays, that end up not being as impressive as advertised. Jeffress, again limited to only 10 games due to roster space, has an 0.87 ERA with 12 games. He's a great asset, but he needs a team that can use him. 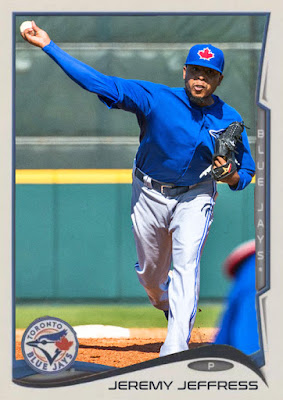 Jeffress begins the 2014 season with the Jays, does Spring Training with them, pitches 3 games but sports a 10 ERA. Now the Jays have even less use for him, and release him. 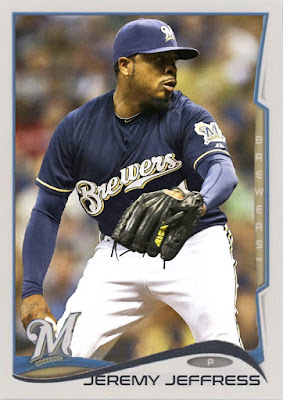 Of course, a team does pick him up, and it's thankfully the Milwaukee Brewers, a team that would be nothing but good to Jeffress over the years. In 29 games in 2014, Jeffress has a 1.88 ERA with 25 Ks. This is the season that ensures that Jeffress will be relieving games for the rest of the decade, as he's lights out here, and the Brewers will use him.
2015 and 2016 Jeffress gets Brewers issues, that's the right idea. Then, at the 2016 trade deadline, he's involved in a deal to Arlington. 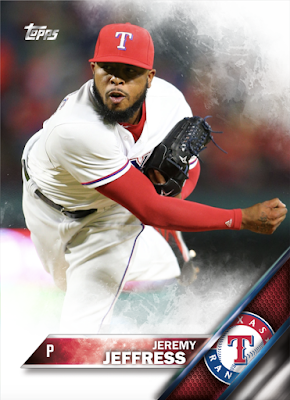 This is Topps just showing its biased towards people who aren't relievers again. Jonathan Lucroy, who he's traded with, gets an Update issue. Carlos Beltran, traded around the same time as he does, gets an Update issue. Jeffress, despite being just as crucial to the Rangers as Lucroy, does not. Boo.
Jeffress gets 12 games in Arlington to finish the 2016 season, doesn't add to his 27 saves in Milwaukee, but strikes out 7 plus one more in the postseason.
And yes, Jeffress does get a Rangers card in the 2017 Topps set. But...Jeffress is involved in another trade deadline deal. And because NONE of the 2017 trade deadline deals made it into 2017 Update... 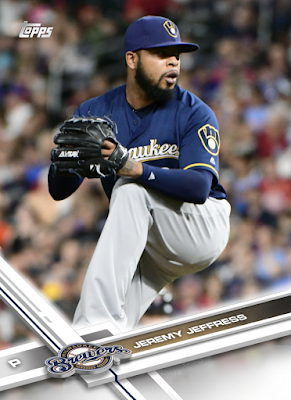 I've gotta do this one as well.
The Brewers trading for Jeffress in 2017 is the opposite of his 2016- Jeffress was struggling in Texas and the Brewers wanted to bring him home so he'd excel for them. Sure enough, Jeffress sported a 3.65 ERA in 22 games, and returned to his former glory with the Brewers. 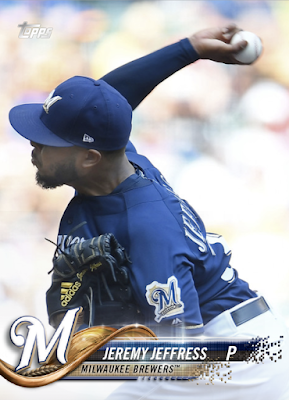 Topps not making a flagship card of Jeffress for their 2018 sets might be their most startling admission. 2018 is Jeffress's best season to date, with a career high WAR of 3.3, a full season career low ERA of 1.29, a career high 89 strikeouts, 15 saves, an All-Star appearance [which is also neglected for Update], and 11 postseason Ks despite a few runs. It's a fantastic performance from Jeffress, and one that gets him a Topps card in 2019, despite an inferior season that year.
Once I figure out how to customize the 2020 design, I'll deliver his 2020 Cubs tenure. Honestly, doing 2020 customs might be a completely different project in itself, as the story Topps told of the 2020 season was more a story of the 2019 season stretched out throughout all of 2020. So if this project is filling in Topps' blanks, I'll have a LOT to do for the 2020 set.
Posted by Jordan at 3:36 PM