Topps Cards That Should Have Been: Pre-Yankee Gio Urshela 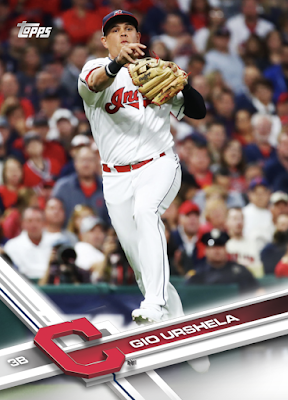 Topps...being Topps...made cards of Gio Urshela for the first two years of his career, and didn't bother to make more until he became a fixture for the New York Yankees. Man, what is it with them and shiny objects?

It's not like Gio Urshela's work in that period was completely unmemorable, either. Especially his 2017 season, which he spent as a backup for Jose Ramirez in 67 games, and became a well-used utility type after two seasons of near-dormancy for him. Yes, he only hit .224, but he was still helping a surging Cleveland team return to the playoffs. I actually saw Urshela play 3rd, granted at Fenway. Took notes on how good of a defensive choice he was. 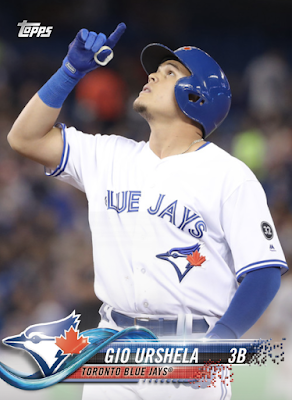 I actually caught him the following year as well, in Toronto. Urshela had wound up with the Jays thanks to a minor deal during the offseason, and found himself as a substitution for Josh Donaldson during his injury-plagued 2018 campaign. In 19 games, he hit .233 with 10 hits, and spent most of the rest of the season in Buffalo. During Gio's at-bats during the game we witnessed at Rogers, there was a guy a row in front of us who, every time, would shout something to the extent of 'COME ON GIO, DO IT FOR JESUS!'. Which...okay, I'm not the most religious chap around, and while I respect piety and devotion and such, I don't especially see why this specific at-bat needed to be tied directly to religion. Then again, I'm not this guy, I don't see the world the way he does, and can't entirely judge.

Still, Urshela somehow missed out on Topps cards in both occasions, and didn't get another one until his breakout year with the Yankees in 2019. Not that the two seasons in between were crucial [I thought the 2017 one was, but hey], but Topps should have known he'd eventually be a fixture somewhere.

Labels: 2017, 2018, Blue Jays, Giovanny Urshela, Indians, Topps Cards That Should Have Been