Topps Cards That Should Have Been: The Rey Ordoñez Chronicles 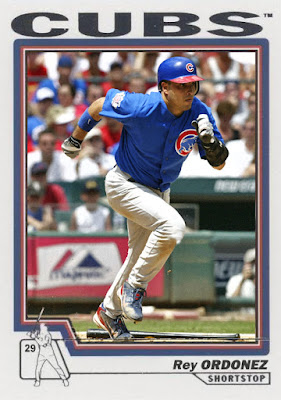 Rey Ordoñez, for those unaware, was one of the core members of an infield that MLB Network once voted one of the greatest of all time. For a shining few seasons in Queens, the Mets were protected by the infield combo of John Olerud, Edgardo Alfonzo, Rey Ordoñez and Robin Ventura. In 1999, the four of them combined for 21.1 WAR, with Alfonzo, Olerud and Ventura scoring WAR over 5. Ordoñez only had a 2.8, but was no slouch, capping off his third straight gold glove and his career-high 60 RBIs in 99.

After the World Series team subsided, Ordonez and Alfonzo left in 2002. Eddie went to San Fran and had a steady gig for a few years. Ordonez bounced around, spending 2003 with Tampa, and botching a 2004 spring training audition with the Padres, picked up by Topps despite him never playing a game there.

But, eventually, an MLB team did call upon the services of the once-strong shortstop, and the Cubs came calling in 2004, signing Ordoñez in May. In 23 games, Ordoñez hit .164 with a negative WAR, and was released after about a month of service. As he was gone before Update went to press, Rey Ordonez' time in Chicago never made it onto a Topps card.

It's not the official end of Ordoñez's story, however... 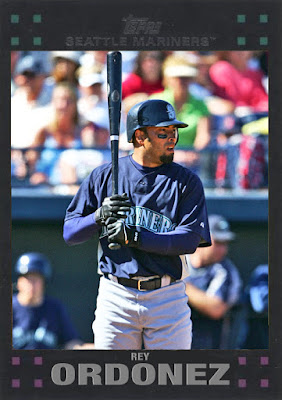 Yes, in 2007, three years after playing his last MLB game, Rey Ordonez tried to break back into the majors one last time with the Seattle Mariners, a team that would eventually start Yuniesky Betancourt at short. But Ordonez persevered, doing his best in Spring Training despite being one of the last members of the 2000 Mets team left in the majors [Benitez, Piazza, Hampton and Payton were all winding down]. The gig didn't work, and the Mariners didn't give him a major league run at things, which means Rey Ordonez wasn't even good enough for the 2007 Mariners by the end, but it's an interesting 'what if' scenario.

Actually...hell, since we're talking about spring training attempts by former Mets infielders, I've got one more, and it's very relevant: 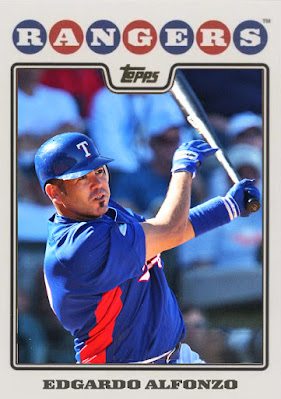 Yeah, turns out Rey Ordonez wasn't the only member of that infield to try to break back in.

In 2008, Edgardo Alfonzo, whose last game was in 2006 with Toronto, auditioned for a role with the 2008 Rangers, a low-level team that was beginning its trek back to relevance thanks to Josh Hamilton and later Elvis Andrus. He was 35, not to the level he was with the Mets, and just wanted a chance to play again, even for someone like the Rangers. Like Ordonez, Fonzie didn't get very far, and was cut before the season began, but we still have this picture of how the Rangers could have gone with things.