Topps Cards That Should Have Been: 2015 Yoenis Cespedes 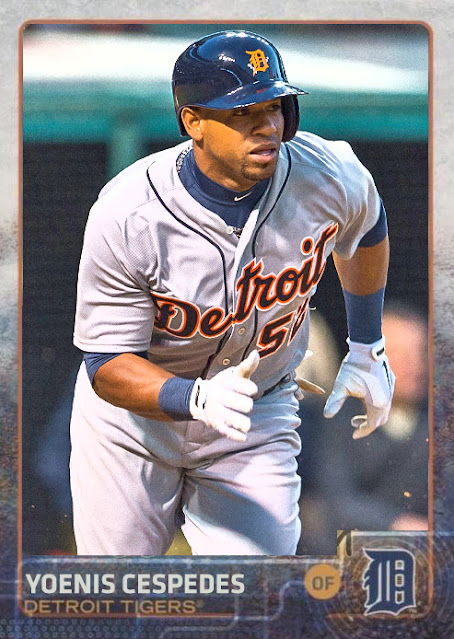 Typically, if one of the biggest hitters in the game signs with a new team...you get on that. You just do.

I understand that Topps had a nice shot for Yoenis Cespedes as a Red Sock for Series 1, but...that's not a good enough reason. You know the Sox aren't gonna re-sign Cespedes. So just...wait until Series 2, cause by then you'll know who DID sign him, and go with it then. Don't wait around.

What I'm saying is that the lack of a 2015 Topps card depicting Yoenis Cespedes on the Tigers, a team he played for in 102 games, could have been avoided.

Like, let's look at all the Topps sets that DID depict Cespedes in a Tigers uniform- Bowman Chrome, Allen and Ginter, Archives, Finest, Gypsy Queen, Heritage, Museum Collection, Stadium Club, Triple Threads. That's the bulk of Topps' spring-to-summer lineup. So they at least did that, but...they missed flagship.

Even more importantly, they missed Topps Chrome. That's usually when players who've been in Topps flagship in outdated uniforms that won't get new cards til Update get seen in new uniforms. They've done it several times before. Except for some very strange reason, Yoenis Cespedes doesn't even have a 2015 Chrome card. Why would they omit him from Chrome, he's a big star in 2015. Did they just...not want to make a card of him on the Tigers?

I don't see why not. Cespedes hit .293 for Detroit, with 18 homers and 61 RBIs, enough to give him some comeback numbers that everyone could enjoy. So it's a bit maddening that he doesn't get one. You think they're just going 'oh, don't worry, you folks can wait, we'll give you a Cespedes Tigers card in Update'

Cespedes gets traded to the Mets at the deadline, catches fire and becomes an MVP threat, helping the Mets into the playoffs and the World Series. So now, if Topps doesn't make a Cespedes Mets card, their ass is in the toilet. So they put one in Update, and placate the Mets fans who wanted that...while also infuriating all the collectors who never got the Tigers one.

This is what happens when you wait. This is what happens when you put too many eggs in the next basket. Topps clearly learned from this, because these days if a player who signed to a new team in the offseason is traded by the deadline, they'll make FIFTY MILLION CARDS OF HIM with the FIRST team, like they did with Starling Marte on the Diamondbacks this year. That man was appearing in products as a Diamondbacks six months after he was traded from there!

Regardless...I made this Cespedes to right one of the famous Topps wrongs. I might have to do a lot more work to right their 2020 wrongs.

Labels: 2015, Tigers, Topps Cards That Should Have Been, Yoenis Cespedes