Topps Cards That Should Have Been: The Ron Gant Chronicles 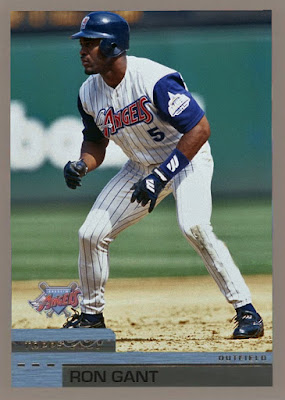 Ron Gant, from 1987 until 2000, played for entirely teams with red in their uniforms. Nothing but red teams. The Braves, then the Reds, then the Cardinals, then the Phillies, and finally the Angels. Talk about consistency.

Yet because the two-time all-star slugger was traded to the Angels midway through the 2000 season, and because he wasn't as relevant as other mid-2000 trade deadline acquisitions like Curt Schilling, Topps didn't include an Angels card of Gant in their 2000 traded set.

To be perfectly honest, the Topps consumers of 2000 weren't missing much. While Gant hit 20 homers with Philadelphia for the first half of the season, he only hit 6 in 34 games in Anaheim, hitting .232 with only 19 hits. It was the end of Ron Gant's reign as a relevant, competitive slugger in the MLB.

Yet Gant's career continued for 3 more seasons with teams that did not include the color red. He would split 2001 between the Rockies and A's, with the former being depicted by Topps and the latter not having enough photo evidence for me to do so. He would also spend 2002 with the Padres, and had something of a comeback year with 18 homers and a 1.9 WAR.

And for his last trick... 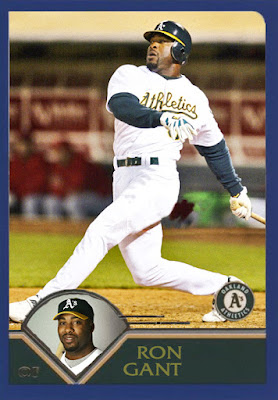 Ron Gant would return to Oakland for his final season in 2003, as another one of Billy Beane's sabermetric-friendly tricks to continue the A's good luck. Gant's time in Oakland wouldn't work as well as people like David Justice and Ricardo Rincon in 2002, as he'd only hit .146 in 17 games, at the very least hitting the final one of his 321 home runs.

It was a trailed-off ending to a career that started with such a bang in Atlanta, and it would have been cool if Topps had put a more formal cap on it. But, again, that's what I'm here for.